Boston Early Music Festival Gets in Gear for Monteverdi Festval 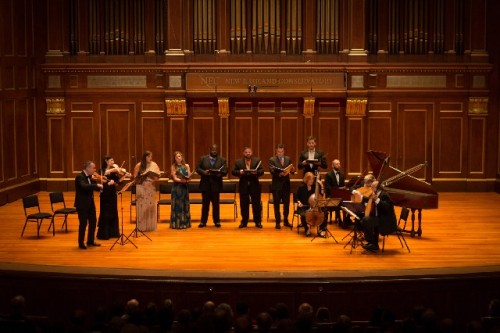 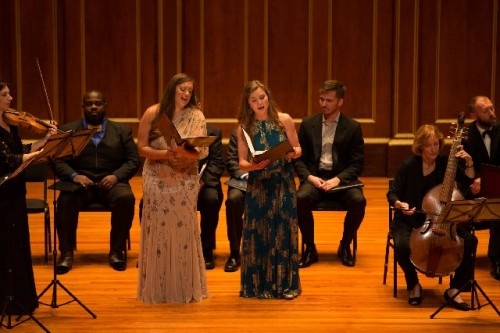 Early 1980s Pop diva Pat Benatar had a hit with “Love is a Battlefield.” Claudio Monteverdi (1567-1643) would have understood. More than 350 years before, in his eighth book of madrigals (1638), he wrote a series of songs and vocal ensembles that examined the pain of love as well as its joys. In one madrigal, set to a text by Ottavio Rinuccini, he wrote “Ogni amante è guerrier” (Every lover is a warrior). In Monteverdi’s view and that of his late Renaissance period, love was indeed a battlefield, at least as a conceit.

Saturday night at Jordan Hall, the Boston Early Music Festival presented a concert of Monteverdi’s late madrigals that was so irresistible that one wishes it could be repeated, with perhaps a few substitutions, every Saturday night. The secret to the success of the BEMF chamber ensemble is that it makes everything it touches – operas by Marc-Antoine Charpentier, George Frideric Handel and Henry Purcell, among others – sound as if they were composed yesterday. If you go to Youtube and watch the Pat Benatar hit, you’ll see that it is what seems dated, not the works composed centuries ago.

Although it stood on its own as a highly pleasurable musical event, the concert also served as something of a preview or even advertisement for what will be the BEMF’s season of Monteverdi. At its biennial festival, held from June 7 to 14, 2015, it will present staged versions of all three Monteverdi operas that have survived. “l’Orfeo,” his first, and “L’incoronazione di Poppea” (The Coronation of Poppea), his final and arguably greatest opera, are revivals of earlier productions. But “Il Ritorno d’Ulisse in Patria” (Ulysses’ Return Home) will be new. Tickets sales are so strong for an event still eight months away that the BEMF has added a third performance of “Ulisse” to its schedule. And to ensure that Monteverdi junkies get their fix, it will also be presenting the “Vespers of 1610,” his major sacred work.

Everything Monteverdi wrote was inherently theatrical, and most of his madrigals tell a little drama. Unlike contemporary song, which is usually sung by a single voice, madrigals could have two, three or more voices singing, essentially taking parts in what becomes a dialogue or even a short scena. The opening selection, “Hor che’l ciel, e la terra,” based on a sonnet by Petrarch, featured all six vocal soloists, but they can also be done with a single singer as well. The program was a little misleading about its contents. Although the madrigals of Monteverdi’s eighth book dominated, there were also madrigals from his seventh book and even a song based on the Song of Songs from one of his sacred pieces. There were also three short instrumental pieces by Dario Castello and Andrea Falconieri, Monteverdi contemporaries. (I wondered why they didn’t play Monteverdi instrumentals, but then I racked my brain and couldn’t remember ever hearing one, other than overtures and such in his operas. He must have devoted his compositional skills exclusively to music for the voice.)

The concert was expertly assembled to vary mood and highlight different soloists. It opened with the Petrarch sonnet, which laid the evening’s cards on the table while giving individual soloists a moment to shine. Jason McStoots’s sweet and gentle tenor acknowledged that the sweet and bitter coexist in love. “I wake, I think, I burn, I weep, for her whose face/Is ever before me, to my sweet pain,” Douglas Williams sang, emphasizing the “dolce pena.” “War is my condition, full of anger and grief/And only by thinking of her do I find some peace,” he continued in his beautifully expressive baritone. Teresa Wakim’s soprano soared above the others with “A thousand times a day I die, and a thousand times reborn,/So far am I from my salvation!” (All translations by music director Stephen Stubbs.)

After the somber Petrach, time for something a little lighter. “Chiome d’oro” (Tresses of Gold) opened with a sweet violin introduction played by concertmaster Robert Mealy and Julie Andrijeski, and then Wakim was joined by soprano Danielle Reutter-Harrah to sing a playful duet that still hinted at the pain that even a happy love can bear. Their voices blended beautifully, weaving in and out of each other, and they soared together truly joyfully.

And so it went. In the next madrigal, which featured the three male singers, McStoots, Williams and tenor Charles Blandy, we’re back to the battlefield. But the three young singers found the comedic in the verses and brought it to the fore.

The next madrigal was the outlier, a solo based on a text from the Song of Songs sung by counter-tenor Reginald Mobley. Accompanied by Stubbs and Paul O’Dette, who played long-necked chitarroni, and gambist Laura Jeppesen, Mobley sang with an exquisite sadness, his lovely and sweet voice proving deeply touching.

I think you get the idea.

One more observation, however: The “hit” of the concert, “Lamento della Ninfa” (the Nymph’s Lament), came after intermission. A true mini-drama, it opened with the male trio, accompanied by Stubbs, O’Dette and Jeppesen, setting the scene: A maiden bewails her lost love. Then Reutter-Harrah entered vocally, lamenting to high heavens her lover’s infidelity, beseeching the god of love to bring him back. Her pain was fully expressed in a single word, “Amor,” bearing the double meaning of the god of love and the emotion she harbors without a lover to share it with, which she hurled against the gates of heaven with unrestrained passion. Her lament was punctuated by the trio with sympathetic comments, “Miseralla,… Tanto gel soffrir no può” (Ah, poor girl, … she can not bear such scorn). With Monteverdi and Reutter-Harrah’s performance, we’re close to African American soul music, which like early opera, sought to give direct, unfiltered expression to deep feelings. The male trio concluded the scena with the observation, “Così ne’cori amanti/Mesce amor fiamma e gel.” (Thus it is in lover’s hearts,/Love mingles with fire and ice.)

A major part of the reason the concert was so successful is that the Vocal Chamber Ensemble the BEMF has assembled over the years knows that early music, Monteverdi’s particularly, is text-based. And even though he gave the lamenting nymph gorgeous, melting lines to sing, it works best if the text is clearly enunciated and the sound is tied inextricably to the words. With these young singers and the expert instrumentalist who accompany them, the music comes to life in the way the composer intended (we can, of course, only speculate about that) and how the original audiences most likely heard it. This is no museum music, as early music once was during the early days of its revival, this is live, contemporary music performed by live, contemporary singers and instrumentalists. The BEMF has found the proper formula to make it work.