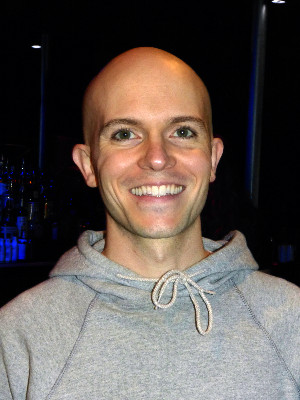 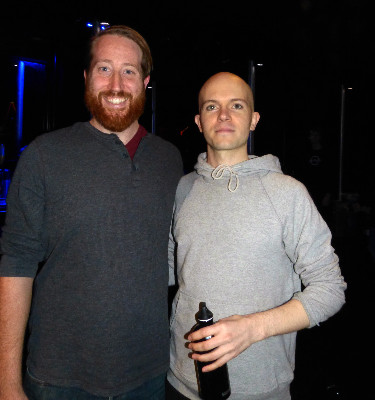 The team of Michael Rau and Crowley.

Spending an evening at Oberon, with its cabaret environment, is about as close as we can come to a séance with the Kit Kat Club of the Weimar Republic.

We get settled at a table in a balcony adjacent to the stage. A waitress approaches for a drink order. A printed card on the table asks us to write what most evokes the concept of pain for us.

Given the title of the evening Song of a Convalescent Ayn Rand Giving Thanks to the Godhead (In the Lydian Mode) I wrote “Libertarianism.” These audience cards are collected and later read as a part of the madcap performance of the bald as an egg, slightly built Michael Yates “directed” (there’s a running gag about that) by his taller and scruffy side-kick Michael Rau.

Before the performance begins ever so casually the pair are seen hanging out on a stage more cluttered with stuff than designed. The muli-media work will entail an area for sound management with computers and an array of devices as well as a grand piano. There are props like a ladder, clothing racks, and wigs on stands. At one point as a deus ex machina a dial phone will ascend. Add to all that a disco ball at a key moment.

As is often the case when attending cutting edge theatre like that presented at A.R.T.’s Oberon there is some apprehension about what you are getting into.

That was enforced by the casual, herky jerky start up that introduced the primary themes of a topsy turvey evening: Migraines, pain, and its denial by that eccentric genius and advocate of whacko self interest, an Americanized uber mensch, Mr. Ayn Rand. She took some pride in being known for writing like a man.

As Crowley notes the word "pain" occurs only several times in her voluminous oeuvre. Then oddly in a love scene of Atlas Shrugged which he performed.

We start with ersatz Cliff Notes of the life of the author of the iconic Fountainhead and Atlas Shrugged. Audience members with cue cards are asked to shout out the key events, from birth in Russia to death in America, of her life and career.

Out front we are informed that there will be some twenty plus scenes. These are noted with projected Roman numerals and titles. It also lets us keep score with just how much longer this sanguine but messy, lesson/ entertainment will last.

At about the twenty minute mark you start thinking of catchy lines like “Another fine mess you’ve gotten us into.”

But you start to catch on that the mostly youthful audience, many of whom have ordered drinks, are laughing and enjoying themselves.

As the scenes flash by and Crowley unravels his  saga of years of pulverizing migraines, the thousand of pills that entails, and how it was handled by great artists from Rand to Beethoven, of the Ancient Sumerians and Greeks, you start to get in sync with the calculated mayhem.

He reads from notebooks that chronicle daily attacks of headaches and nausea. There are discussions of causes and alternative treatments. One character is a doctor who treats patients with techniques that offer little or any relief. At a price.

There are a lot of quick changes between all of those scenes.

Then Crowley appears as “she” either a female impersonator or “real” woman who sings an interlude between pole dances at a strip club.

With that bald head and slender build Crowley is a vulnerable looking male. As a woman, with a curled blonde wig, red gown and rhinestone accessories he rocked and ruled. His complex/ angst filled songs about pain are both difficult to comprehend and utterly hilarious.

His female persona has beautiful and compelling eyes. Unlike most drag acts his woman is naturalist, understated and hence all the more credible.

In the manner of a drag entertainer, however,  he zings individuals in the audience. It’s all in great fun.

Then, OMG,  the disco ball came on and brought down the house. He saved another great surprise to end the show but we don’t want to ruin the fun.

By the end of the evening I felt that I had learned a lot about pain, tolerance, gender diversity, and, oh yeah, Mr. Ayn Rand.

At this point Crowley and his partner, Rau, are about youthful energy and raw talent.

If this is a glimpse of the future of theatre Crowley will be a force to be reckoned with.

Last night reminded me of years ago in LA, when also in a Cabaret setting, I saw then unknown Bette Midler. In drag Crowley is up there with vintage Divine Ms. M.

There are only three more chances to see this show.

Take three Excedrin Migraines and call me in the morning.