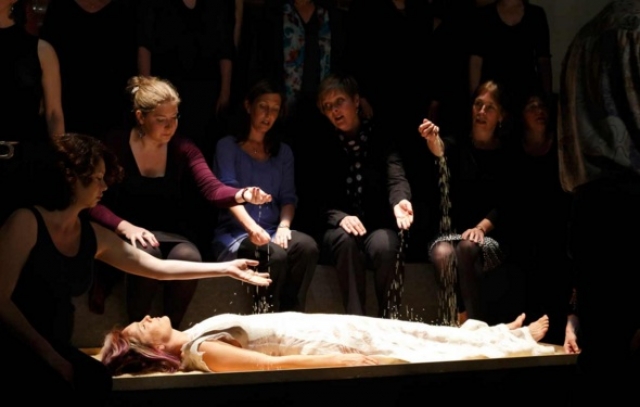 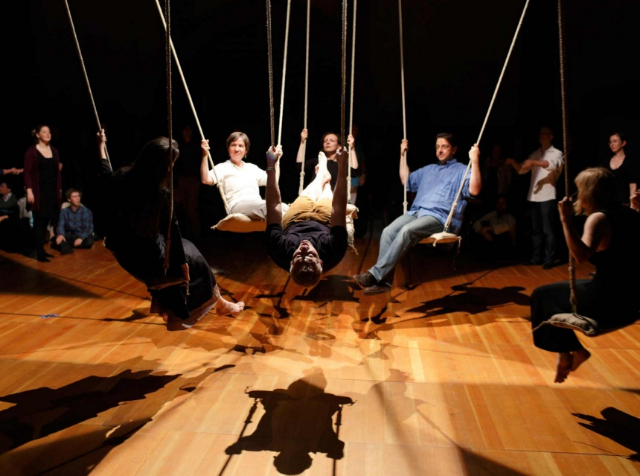 We now know what Brahms meant by a lovely dwelling place. 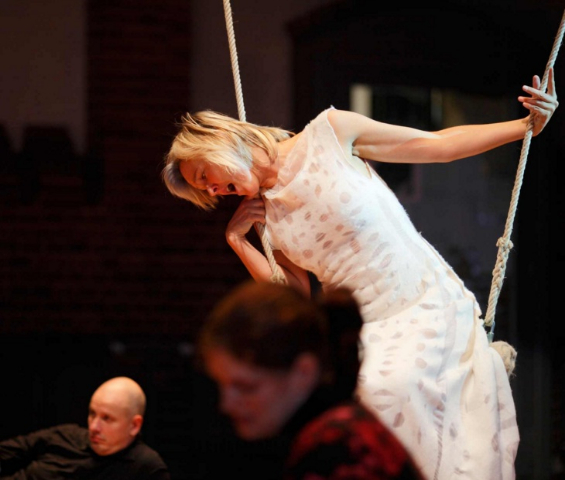 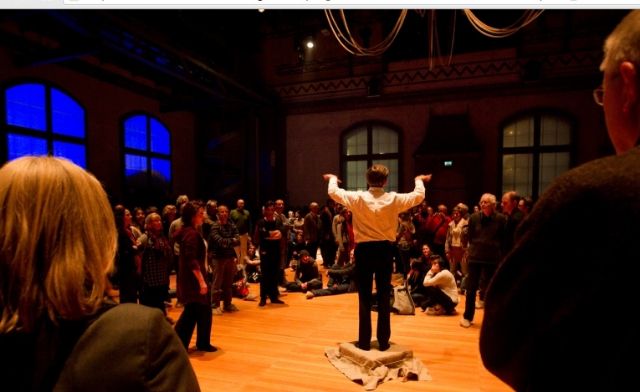 Audience and singers mix around the conductor. 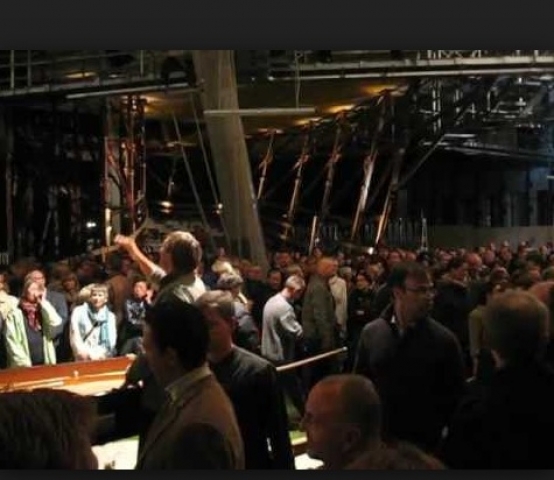 COnducting from the open soundi board of the piano.

The Hall of Synod House has carved timber roof beams and colorful grisaille windows. It can seat a thousand people.

Stepping into the space you are attracted to a central hexagon-shaped gazebo that has a touch of Buckminster Fuller about it. Audience members can make their own paper cups from which to sip fresh mint-flavored water. This may be good for singers’ throats and also for listeners’ hearts. The gazebo is collapsed before the performance starts.

Bleachers on three sides of the room tuck in the audience who also sit on floor, intermixed with members of the choir. A Steinway grand rolled around the floor and rests in different places, depending on the position of the audience and singers. The pianists deliver a dramatic reduction of the orchestra's score.  Two conductors work opposite each other to give moving singers a glimpse of timing and phrasing.

Suddenly you are in the middle of singers, who move about the room, threading through the audience. You immediately feel part of the proceedings. I am fascinated by individual singers’ voices up close and personal. You can do a mutual stare with a chorus members who sing directly to you. There is a wide mix of voices, large and small. Some with tremulo and others without. When chorus members are selected, this variety is a criterion. A large sound that appears to be one voice is achieved by having widely varying voices.

The singularity of the individual experience for a chorus member seems to give the singers as much pleasure as it does the audience. This challenging assignment, where a great deal of music has to be memorized, is clearly worth the effort for performers and listeners alike.

Lighting by Jörg Bittner is perfectly suited to the mood of each psalm. Spotlights detail the powerful baritone Konrad Jarriot as he moves to a casket, a lit bed of white, and then to a balcony altar.   Depending on the mood of each section, hall lights are either dim or bright. The conductors have spots on them, probably so the singers can read the gestures.

The best known section, How Lovely is Thy Dwelling Place (Wie lieblich sind deine Whonungen) was full of surprises, which made you realize what a swinging place heaven may be. Marlis Petersen, the great German soprano, did her solo from a swing, pushing herself to and fro. She had already been on the set for forty minutes. Lying still. Dead and then spirited away.

Petersen is a very important soprano, whose range is wide, but who carefully tends her career. In the past year, we have seen her in Lulu and the Fledermaus in Munich, and now this daring role. After the performance, she said that she is always trying new roles and ideas. She is performing in Anno Schreier’s new opera Hamlet this fall.

Petersen’s coloratura voice is flawless as it lofts its way through to victory as the sting of death is removed. She goes ever higher and higher on her swing, touching the heavens with heavenly sounds. They course through the audience with sheer pleasure.

In addition to weaving through the audience, the singers enact emotions.  Sasha Waltz creates one moving tableau after another. In one singers wrestle in pairs, gripping each other by the shoulders, tugging to and fro with effort.  The purpose is a mystery but the struggle is not.

Processional cloths are rolled out on the floor by young children who must be angels. We are exhilarated by the Brahms, but also by our closeness to the voices in whose midst we stand and sit.  Jochen Sandig has created a unique and deeply moving human experience.

The act of singing, according to scientists, fills the brain with endorphins, the brain’s feel good chemicals. Of all types of singing, it seems that choral singing has the most dramatic effects on people’s lives.

Choral singers have higher satisfaction with life than the general public. They have less anxiety and depression. Singing plays a central role in people’s health. Not all people can sing, but everyone can listen.

The immersive experience of the performance of the Brahms Requiem by the Rundfunkchor Berlin suggests that we listeners can get the benefits of singing by osmosis if we are close enough to it.

This is a secondary benefit of a powerful evening of beautiful music making, in the midst and in the moment.