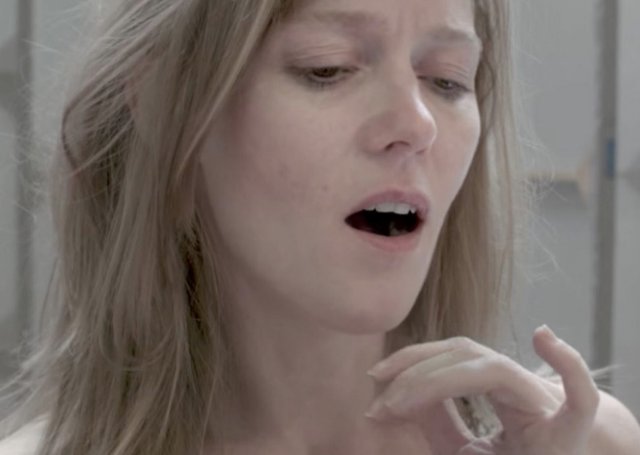 John Zorn is a composer after super diva Barbara Hannigan’s own heart. We get a bit of their meeting of minds in the films of Mathieu Amalric focused on both artists. They were recently exhibited at the New York Film Festival. In them, we can see a composer whose ear is wide open to any sounds that can be shaped into music. Beside him is the singer/conductor whose spirit inspires his new sounds and then realizes them. Amalric allows us to be flies on the wall as they collaborate.

Since she was nineteen, Hannigan has worked with the iconoclastic master of voice, Richard Armstrong, to sing notes that are beyond the imagination until you hear them. Hannigan is both wild and loyal.  Armstrong sat in the second row at the Park Avenue Armory concert.  His presence helps Hannigan dare to produce intriguing sounds that are without a doubt music. Yet it is music you have never heard before.

Zorn’s Jumalattaret was even more bold and beautiful than its US premiere in Ojai last June.  When Hannigan first met Zorn, this work was finished but had never been performed.  Yet it might have been written specially for her. Based on Elias Lonnrot’s 1835  re-telling of Finnish myth and folklore, four goddesses are presented between a prelude and postlude.

Icelandic vowels and consonants are the least of it.  We enter a feathered animal world of crows and cackles.  We also hear a variety of whispers we did not know existed.  The breath is not a singular moment, but instead ranges widely around an “huh” at the back of the voice.

Stephen Gosling is a pianist who often performs Zorn.  His technical prowess is formidable.  It is his flexibility that stands out during this evening.  Standing and reaching into the piano to pluck and bang when those gestures are required, he is comfortable in what often seem superhuman. He rushes over the the keyboard, interspersed with lovely, quiet phrases.  He and Hannigan move together and against each other like old allies in pursuit of the composer’s notions.

The Jack Quartet is another of Zorn’s regular troops.  What Hannigan does with the voice, they now take up in their stringed instruments in thought experiments for string quartet and vibraphone. Sae Hashimoto on the vibraphone adds that chiming top touch which the human voice often does for the composer.

Gosling then performs Encomia for solo piano.  Zorn announces that composers often do groupings of five small pieces.  They are in search of a theme as they range from bristling sounds plucked from the sounding board to lovely phrases in honor of the timeless reality of music.

Hannigan returns to sing Pandora’s Box, which reminds the composer of Alban Berg, whose Lulu Hannigan brings to new depths. It can’t be accidental that The Jack joins her in this performance, sounding to all the world like Jack the Ripper, who fells Lulu at the end.

Hannigan selected the Veterans Room at the Park Avenue Armory because she wanted the audience to have an intimate experience. Designed by Louis Comfort Tiffany, Stanford White, Candace Wheeler and Samuel Colman, it is a wildly divergent melange of styles. We are up close and personal in a room which reflects the music's rich variety, unified by the composer and the performing artists.