A New Gallery in Pittsfield 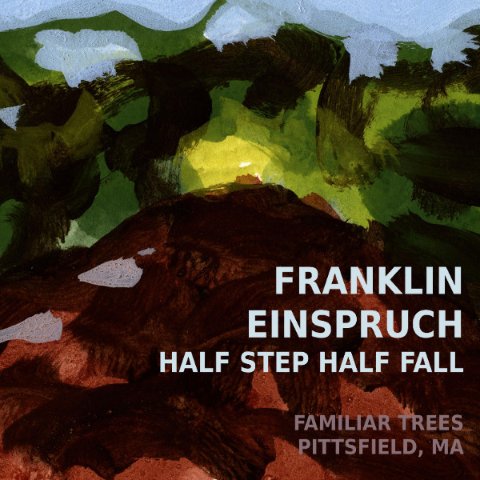 The inaugural exhibition at Familiar Trees, newly opened on North Street in Pittsfield, will feature the art of Franklin Einspruch. Einspruch works in painting, printmaking, drawing, and comics poetry, a hybrid form that uses the syntax of comics to produce a poetic effect. “Half Step Half Fall” will include original painted works, print series, and books published by the artist's imprint, New Modern Press.

One of the New Modern Press titles is Cloud on a Mountain, a book of comics poetry conceived during artist residencies in 2015 and 2018 at Bascom Lodge, at the summit of Mount Greylock in Berkshire County. Writing for the Boston Globe, Nina MacLaughlin called Cloud on a Mountain “meditative, with a sly humor and a wisdom that's both deeply engaged and transcendentally detached.”

“Half Step Half Fall” will also include a series of screenprints of images from “Regarding Th.at,” a cycle of comics poems published online that Einspruch created last year in Vienna. The artist was the 2019 Fulbright/Q21-MuseumsQuartier Artist-in-Residence, one of a handful of artist appointments in the entire Fulbright U.S. Scholar program.

Einspruch has been involved in comics poetry since the form emerged in the mid-2000s, publishing works at the site The Moon Fell On Me. He is the author of the first comics poetry anthology, Comics as Poetry (2012), with a foreword by renowned poet William Corbett. He organized an exhibition of comics poetry at Winkleman Gallery in New York City in 2014. Recently his comics have been published in the literary journals Solstice and Pangyrus.

Einspruch's art has previously appeared in 18 solo exhibitions and 40 group exhibitions. In addition to the Vienna Fulbright, he has been a resident artist at programs in Italy, Greece, Taiwan, and around the United States. He has authored 221 essays and art reviews for many publications including The New Criterion and Art in America, as well as another 65 for his own publication, Delicious Line. He also produces one of the longest-running blogs about visual art, Artblog.net. He lives in Boston.

Familiar Trees opened in September 2020 to specialize in high-quality used books with an emphasis on art, poetry, and literature.