The Passion of Joan of Arc with Live Music

Donald Greig Devises a Score Presented at the Miller Theatre 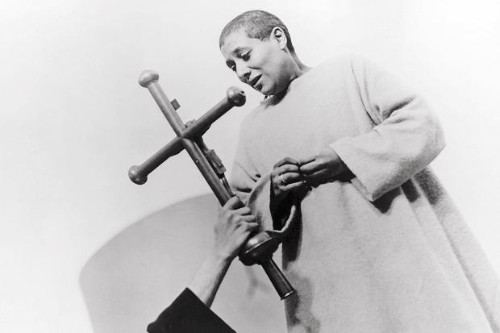 The Passion of Joan of Arc by Carl Theodor Dreyer with a new score from the 15th century by Donald Greig. Performed brilliantly by the Orlando Consort. 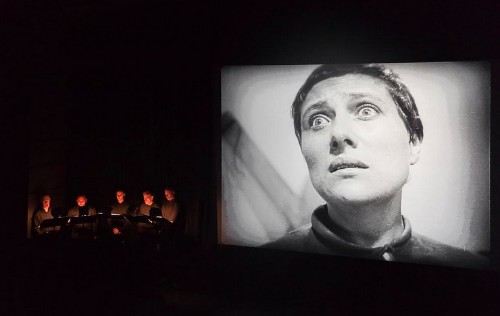 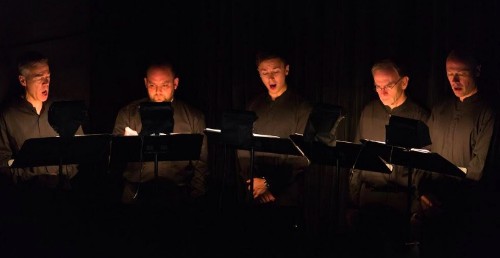 The Orlando Consort provided the live score for the film. 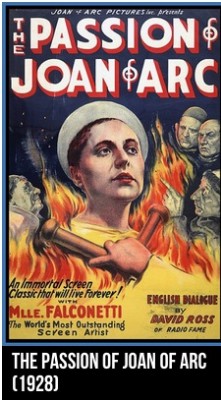 WHen the film opened in 1929 it received mixed reviews. Today it is correctly regarded as one of the world's great films. 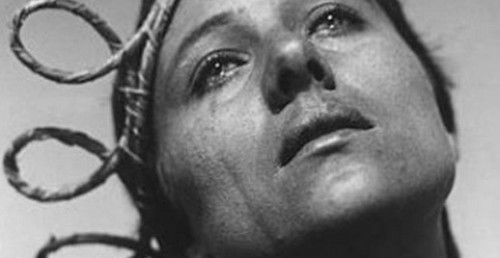 Renée Marie Falconetti in a self made crown. 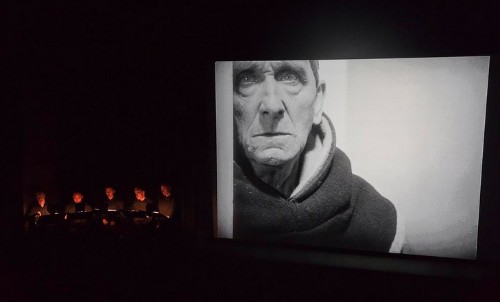 The Orlando Consort and the film.

The Passion of Joan of Arc by Carl Theodor Dreyer

Accompanied by a live score of medieval music

Devised and developed by Donald Greig

Early Music at the Miller Theatre

Silent films of the 1920s began when the theatre lights dimmed and a conductor marched down the aisle. He raised his baton, the curtains opened. On flashed the film accompanied by the orchestra.

We no longer think of the silent film as a jerky, fuzzy camera sport with player piano tinkling in the background.

An example of the resurrection of the best of the silents was mounted at the Miller Theatre at Columbia University this week. One of the great movie directors, Carl Theodor Dreyer, was represented by The Passion of Joan of Arc.  Passion was presented with a new musical score. Or underscore.

A good score blends with the film and does not overpower. It gives the correct feel. Douglas Greig who took on the task of creating music for Passion used pre-existing music of the period in which Joan lived, the 14th and 15th century.   The 14th century was represented by the liturgical Sanctus and Salve Virgo virginum. The more melodic music of Dufay and dePizan was written in the15th century.  There is no question that music at that time was sung by unaccompanied voice and Greig elected this form.

The over all effect of the music was to mesmerize. In the film, Dreyer captivates by close-up and quick cutting. People seem to talk to each other in fast cut film shots abutting each other in dialogue.

The music has a trance effect, putting you into one zone. The film captures the emotions of the trial. The music suspends us in time.

Contemporary artists are working to recreate the overpowering experience of going to the movies when live accompaniment was the rule.  Razzmajazz Dixieland Jazz Band’s carefree score to Clara Bow’s It, or the authentic period sounds of the Mont Alto Orchestra, or the avant-garde electronic scores of Art Zoyd, in various styles, drive the silent film into the hearts of the audience. Greig's music etches it in us.

Renée Maria Falconetti who plays Joan would make only one film. Yet she is known as one of the great film actresses. When Dreyer saw her on stage in a light comedy in a small Parisian theatre, he brought her in for a screen-test. Her face was what he wanted: simple, and full of haunting agony.

Dreyer photographed her in softer darker shades than her torturers.  They are also bare-faced. but in bright lights, revealing craggy lines, warts and cruelty in forceful strokes.

Dreyer was given a large budget to make the film, but quickly threw out the script and worked from the transcript of the trial. Twenty-nine cross examination were condensed into one inquisition.

Although Dreyer had created an elaborate set with moveable walls, all the better for camera positions and towers in four corners, there is no establishing shot in the film.

Why did Dreyer break up space,  twist our visual sense and shoot in close-up?  The glamour of historical drama is stripped away.  Nothing takes away from the judges' frightening faces Joan sees.  As a composer coming in the early 21st century to add a score, what do you make of the film?

Donald Greig gives the film its due, never impinging on the stripped down visual and emotional texture.  Instead he intoxicates us, smoothing, helping prepare us to take on the jagged violence and cruelty of Dreyer's film.

The five male voices sang the score beautifully and without accompaniment,  Yet they were insistent as a group.  The counter tenor Matthew Venner who often sang Joan's voice, was particularly moving.

The Miller Theatre is a place to go for innovative and surprising musical takes.  Matt Haimovitz on cello, pop-up concert treats and Jazz are all up next, exciting prospects.