More Fun with Jeff and Jane 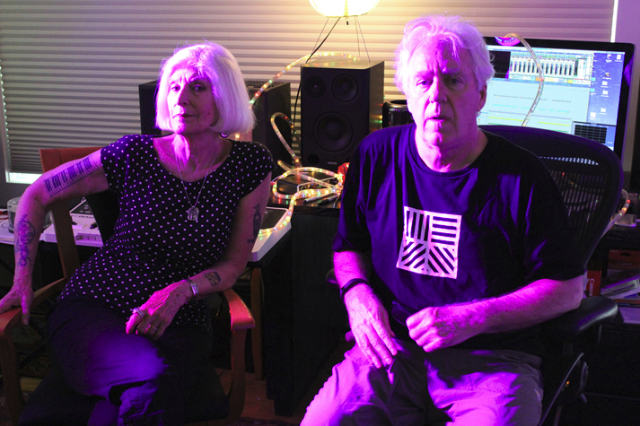 The purple reign of Jeff and Jane.

Jeff and Jane Hudson present an evening of songs from their recent CD release, THE MIDDLE. The couple, known for their minimal electro material from the ‘80’s, have revived their Punk guitar roots with scorching riffs and throbbing beats. They play against a backing track woven from layers of synth and drum machine production. There are a number of new songs, ‘The Middle’, ‘Innocent’, ‘Up Til Now’ as well as some old favorites, ‘Gertrude Stein’ and ‘Los Alamos.’

For background go to: http://officialjeffandjane.com

Since the 1980s Jeff and Jane Hudson have been experimenting with Electropop and synthesized sounds that straddle musical genres and result in “tight, artful sonic arrangements” (Berkshire On Stage). Captured Tracks Records with Dark Entries Records released FLESH, a 20-song compilation of their ‘80’s releases in 2011. They performed this material at Mass MoCA in January of 2012. Now the husband and wife duo celebrate the release of their new 11-song album, THE MIDDLE.

Called “the synth wave couple of the U.S.”  Jeff and Jane Hudson jump across styles and sounds.  Their album Flesh [1983] featured industrial echoes and absorbing vocals but also had electro pop energy combining traditional sounds of post-punk alongside the gleaming new ideas of factory music. Jane’s sultry vocals mix beautifully with cold mechanical sounds.  Othermusic.com said, “Jeff and Jane Hudson in their early sounds take cues from traditional sounds, with elements of rock and folk coming through… Yet, soon it is the synthesizer and drum machine that are at the core of their sound… the duo successfully blurs the line between pure synth pop and more guitar-driven post-punk…” In the new album, big guitars, combined with synths and drum machines, amplifies their sound.

Originally from Boston, teachers at the School of the Museum of Fine Arts and former members of the late-'70s punk band, the Rentals, visual artists Jeff and Jane Hudson moved to NYC at the beginning of the '80s, opened for Suicide, the Clash, PIL and Duran Duran among others.

They now live in the Berkshires.

I GOT A CRUSH ON YOU, Beggars Banquet Records, 1979