The Mystery of Edwin Drood

Dickens at 3 Below Theaters, 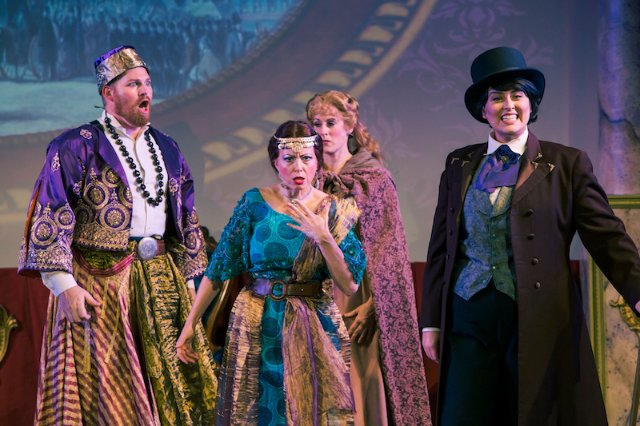 Charles Dickens would roll over in his grave. The master of the hard, the twisted, the bleak expectations, who chronicled grime, abuse, and despair. How could his material be used as the basis for a mash up between a raucous “who dunnit?” and a Gay ’90s vaudevillian music hall entertainment? The Mystery of Edwin Drood does just that, earning its spurs on Broadway in 1985 with a long run and a handful of Tonys.

The musical is based on the unfinished novel of the same name by Charles Dickens. But the auteur, Rupert Holmes, by no means felt restricted by Dickens’s literary style or even his plot line. What he has done is craft a framework around characters from the novel and injected them with baudy and sophomoric “ta-dum” humor and a peppy musical score with a number of quality numbers.

But rather than write a definitive plot, the playwright uses some devices of immersive theater, including audience involvement in deciding whether Drood is alive or dead, and if dead, who the killer is, and more. Don’t consider this revelation to be a spoiler. The enjoyment comes from the constantly churning commotion and the cheesy, over-the-top performances.

The central narrative concerns Drood’s uncle, the somewhat schitzoid John Jasper, played by the redoubtable Stephen Guggenheim, who earns the sneers and boos of the audience. Jasper is in love with his student, Rosa Bud, who happens to be engaged to Drood. When Drood goes missing, Jasper’s motive for doing him in is pretty clear. However, along the way, we learn of hidden relationships and motives for others to perpetrate the murder.

The driving force in the musical is the characterizations, and it surprises that an ad hoc company would attract such a talented cast to fill those roles. Benjamin Pither leads the way as the Mayor, played with impish mischief, strutting like the cock-of-the-walk. He not only guides much of the action with flair but narrates and facilitates, breaking the fourth wall repeatedly. Another high point is Krista Wigle’s debauched and saucy Princess Puffer, operator of an opium den and a lady with a history.

The music supports the action well, and the singers are very impressive, especially Guggenheim who possesses a significant brag sheet as a tenor in opera, and soprano Theresa Swain who portrays Rosa Bud. Upbeat tunes include Jasper and the Mayor’s rapid patter “Both Sides of the Coin” and the pretty ballad “Perfect Strangers” sung by Edwin and Rosa and reprised by a couple later to be determined by the audience – which can produce a strange combination.

The Mystery of Edwin Drood, the musical, has certainly found a market, though it does drag and suffer from complexity at times. Most who seek this kind of entertainment will find this production hits the mark on many if not all counts. The performances have already been acknowledged.  The unexploited opportunities are in the staging, which is not bad, but as a sendup of suspense, it would benefit from more extremes in lighting, sound, and set design. Curmudgeons (count me in) might find this sort of campy material to be a bit unfulfilling, but if you just consider it as a diversion with an abundance of humor and super songs sung by seriously superb singers, it can be a good bit of fun to be enjoyed for what it is.

For those interested in dramatic structure, the play incorporates a great deal of metatheatre, in which attention is drawn to the fact that the audience is watching a theatrical performance. One technique already mentioned is having actors speak directly to the audience which serves as an essential means of engaging the audience and urging its participation. However, another conceit is that each performer represents two characters. First, each is a character from the Dickens source material – the names that are referenced in the review. But the piece is formatted as a play within a play, so that each performer also represents an actor playing the Dickens character. This adds a layer of confusion that seems a bit of an overreach by the playwright in giving homage to the music hall tradition.

The Mystery of Edwin Drood with book, music, and lyrics by Rupert Holmes is produced by Guggenheim Entertainment, and plays at 3 Below Theaters, 288 South 2nd St, San Jose, CA through November 11, 2018.