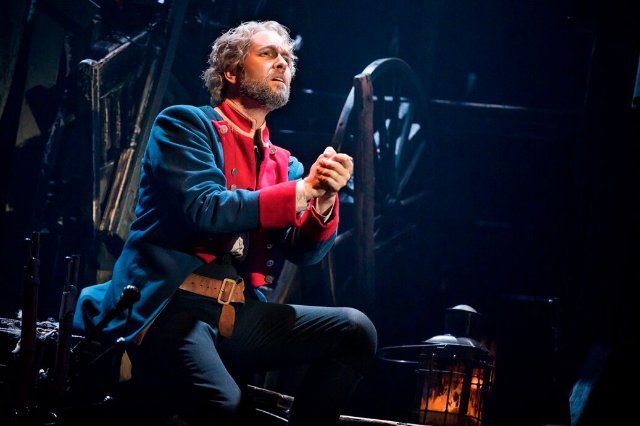 Photo by Matthew Murphy Nick Cartell as a transformed Jean Valjean in a U.S. touring production. 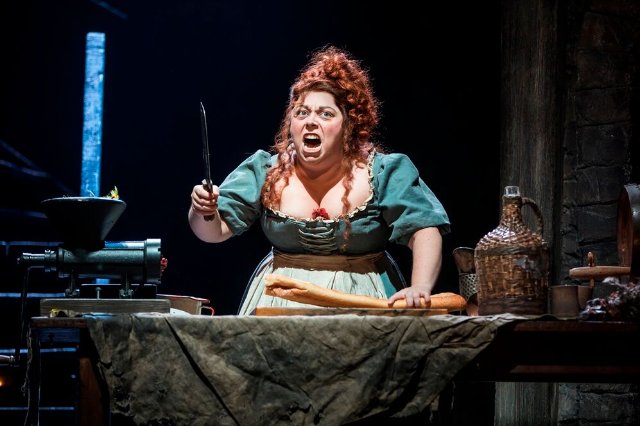 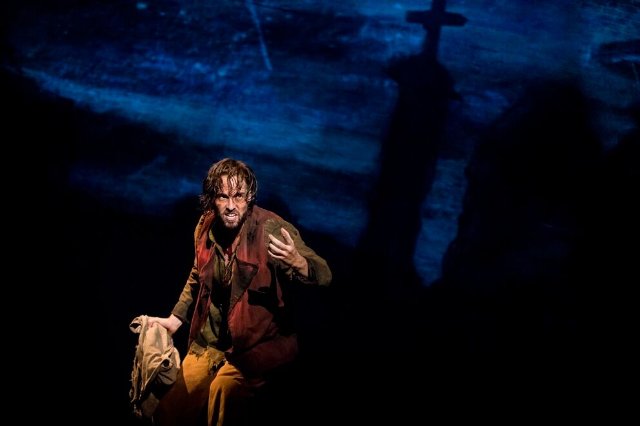 Photo by Matthew Murphy Nick Cartell as an unkempt Jean Valjean, having just been freed from a chain gang.

Even after witnessing Les Miserables for the umpteenth time, this beloved British megamusical from the 1980s somehow re-assures us anew that in a world full of pain and evil, goodness exists.

We leave the theater with renewed hope that there’s a Jean Valjean within our own midst. Further, it reminds us that we humans have a tremendous capacity to redeem ourselves.

It is for these reasons, in addition to the glorious, majestic score and stirring story, that we yearn to watch Les Miserables for the umpteenth time.

Fortunately, we have that chance. That’s because a riveting equity U.S. touring production, complete with robust singing, believable acting and a vibrant, live orchestra, is currently making its way through the Sunshine State before heading north.

This isn’t the Les Miserables to which you might be accustomed, with the famous turntable stage.

The result of the changes is a fluid, almost cinematic approach to storytelling. It keeps us riveted to the stage while drawing us fully into the world of 19th century revolutionary France. Hugo’s highly acclaimed novel, also titled Les Miserables, serves as the source material.

Some of the scenery in this new production is striking, particularly the depiction of a starry sky. Still, for much of the show, darkness envelops the stage. While Les Miserables takes place in the 1800s, it mirrors our own bleak world. For instance, today many lack access to suitable healthcare, employers take advantage of workers,  a wide gulf separates the rich and the poor and women as well as children suffer from mistreatment.

Yet even in its saddest moments, Les Miserables practically embraces us in a soothing caress. You’re not alone, even when all seems hopeless, the characters seem to tell us. Have faith; all will be better when tomorrow comes.

But there appears to be little hope for the story’s hero, Jean Valjean, when the show opens. The petty thief, who stole a loaf of bread to feed his family, seems destined to live out his life with a constant reminder of his crime. But throughout the show, Valjean serves as a reminder of a person’s capacity for change and redemption.

And in the current touring production, it is hard to believe that the desperate, practically feral Valjean is the same man who later delivers a soul-bearing rendition of “Bring Him Home.” It’s a testament to performer Nick Cartell’s acting and singing prowess. His rendition of this heartfelt song features fervent, forceful and prayerful singing.

At the end of the number, his voice turns to a soft, high pitch. He holds the note for an impressively long time, and it’s full of reverence. During the reviewed performance, Cartell’s rendition practically earned a standing ovation.

The performer, who emotes well through his singing, possesses a strong, expressive voice. It sometimes betrays a convincingly aching desperation. Overall, the actor imbues Valjean with a kind demeanor and reverence. Listening to him, we know that Cosette is in good hands with this committed, reassuring father-figure.

Cartell’s Valjean stands in stark contrast to the unyielding, severe and commanding Javert as Josh Davis embodies the self-righteous, ruthless inspector. He unyieldingly believes people are beyond the capacity for redemption and relentlessly hunts Valjean through the many years the play covers. The tension between the two is palpable throughout.

Speaking of Davis, the actor possesses a robust voice that conveys the ruthlessness that this role demands.

Certainly, one would be remiss not to mention Paige Smallwood as Eponine, who vies for the attention of the revolutionary Marius (a dashing, impulsive and romantic Joshua Grosso).

Smallwood invests her character with a streetwise demeanor and toughness, but also conveys touching sensitivity. And the ache in her yearning voice sounds authentic and soulful when she sings “On My Own.”

Meanwhile, the actors playing the revolutionaries convey a rejuvenating solidarity and indomidtability. This is especially true during the march-like number “The People’s Song,” whose famous lyrics include “Do You Hear the People Sing?”

That same feeling of unity pervades the equally robust, upbeat and hopeful “One Day More.” The company sings it with vigor.

In fact, the song is representative of the hopefulness that, in the end, this show imparts. In the touring production, the number begins in darkness. Slowly, one light after another alights until the stage is lit up. The number, as performed here, suggests a world in which one sees glimmers of hope with each passing moment, until a day arrives that is much brighter.

No doubt, we hope for nothing but bright days for child urchin Gavroche. Despite his squalid surroundings, he’s a fighter filled with spunk and toughness. His death at the barricades remains one of the saddest parts of the show. During the reviewed performance, Jasper Davenport played him authoritatively and with moxie.

Gavroche and a grown Cosette (a curious, sensitive Jillian Butler), as well as, of course, Valjean, are among the show’s most likable characters.

On the contrary, the opposite is true for Thenardier and Madame Thenarider, both of whom Jimmy Smagula and Allison Guinn play comically, but with gleeful villainy.

While the Thenardiers offer comic relief, it’s easy to despise them.

Les Miserables presents humanity at its best and practically its worst.

Yet, this musical renews our faith in humanity’s inherent goodness and a person’s capacity for reform.

For these and more reasons, we will continue to hear the people sing.

Les Miserables, the musical phenomenon, is currently on tour with its new production in Florida. To see if it will stop at a city near you, visit https://www.lesmis.com/us-tour. On this site, you will be able to find cities the show will play, as well as ticket, venue and price information.