Barnatan and Weilerstein at Carnegie

Woo Too with Mendelssohn and a New Steven Mackay 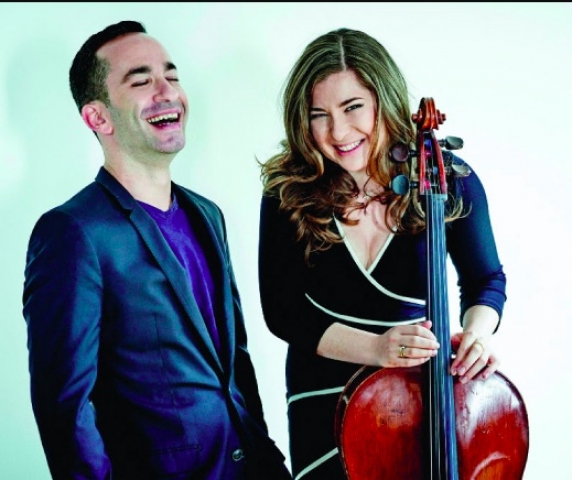 Could this be the beginning of a beautiful friendship, a friendship that works as well as that between Yo Yo Ma and Kathryn Stott?  Both artists have big reputations.  Barnaton has a more varied performance schedule than does Weilerstein.  Stott never emphasized public performance except with Ma. Barnatan's availability in large halls as well as small, as a chamber artist, a soloist alone or with orchestras, his adventures with innovative form have enhanced our musical lives.  He does not have Weilerstein's dramatic range, but he has passion and perfection in spades. When you talk to people after a concert in which he has performed, even the uninitiated are wowed.  They may not know why, but they sense it, that magic.

Clearly the chemistry between the two artists is good.  Weilerstein sits a bit to the side, but forward.  Barnatan turns occasionally to admire and also to pick up her beat.

What is exciting is their constant dialogue in the service of the music.  Mendelssohn's Sonata is particularly charming and varied.  The outer two movements sparkled as the cello often soared against the pulse of the piano.  In the final movement, scales frolicked and arpeggios spilled out.  These movements stood against the solemn second movement with minor staccatos in the piano and hollow cello pizzicati.  A warm lyrical theme then emanates from the cello, with crescendos and decrescendos.

Mendelssohn's third movement begins with a chorale for piano solo.  Bach hovers under the notes, with a response from the audience almost invited.  The cello does respond with recitative.  It is a glorious dialogue which we hear played to perfection by two artists who are clearly grooving on each other, as they listen and respond on notes and in silence.

When Benjamin Britten was asked to talk about his Cello Sonata, the audience thought they were in for an informative lecture.  He started and ended, "Cello Sonata in C by me."  Since he had not given a tonal title to a piece in over fifteen years, the C had significance.  Britten composed the sonata for the great cellist Mistislav Rostropovich. With Britten at the piano, the first rehearsal started with five whiskies.  Barnatan and Weilerstein found the impish scherzo pizzicata and also the mournful and majestic third movement. Who knows what they were drinking back stage.

The coda is an exuberant rush to the end C amidst a riot of notes.  Cellist Jacqueline Dupre wrote that the first movement of the sonata was a struggle between what you might be and what you are.  Stillness, when even the bow is still as the cellist listens to the piano.  Stillness gives an air of expectancy.  The quiet breathes.  Sound is never squashed in the animato section. The liquid cello with phraselets of the scherzo pizzicato characterized by the shape. The fleeting colors of the sonata are suggested to perfection.
The two artists jammed in a new Steven Mackay sonata, co-commissioned by Carnegie Hall.  Here alternating rhythms bounce off each other, challenging the artists to both distinguish their lines and work together.  They rose to perform in a riveting, lovely separation and union.  The composer notes:  Through Your Fingers is “a dialogue between music that is readily grasped and that which seems to slip through one’s fingers.”
Rachmaninoff wrote four self-contained rhythmically varied movements for his cello sonata.  Weilerstein takes up a two-note semi-sob on the cello. In response, the piano offers the motif of the unit da,da,dah; da,da,dah.  It is gawky in contrast with the two lyrical figures.  The third movement has a rapturous and glowing melody which expands. Weilerstein on cello offers a sinuous decoration.  Emotional depths and highly charged romanticism are clear in both instruments as they offer melodies independently.  The second movement veers between darkly playful scherzo and a lyricism.  In the third movement, there is an extended piano introduction and then a beautiful melodic contribution on the cello.  Each partner can get to know the other better.  The last movement moves between liveliness and stunning lyricism.
Yes, a beautiful duo performs lusty music in all its richness in honor of music.
Back to Front Page Section Home