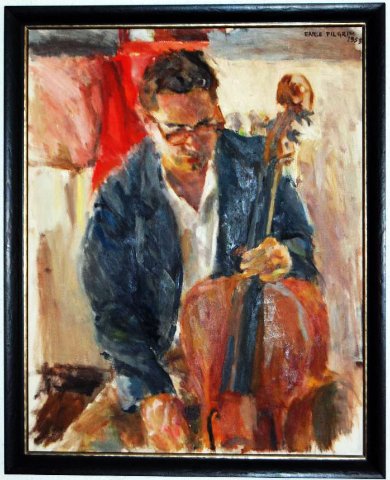 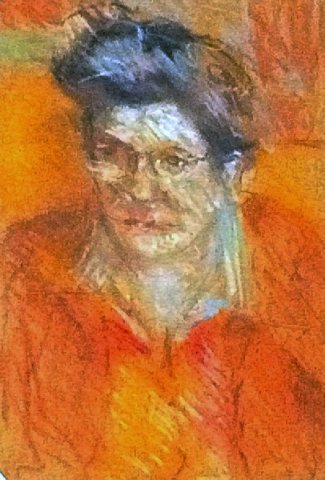 Earle Pilgrim maintained a small jewelery shop in Provincetown in the 1950s. The space morphed into the legendary Sun Gallery which was home to the emerging generation of figurative expressionists artists. Later he and his wife Lily moved to a loft in Boston and eventually one in New York.

Gonzo Journalist, William J. Cardoso, who Pilgrim portrayed in pastel, recalled visiting the loft which was quite theatrical and contained very large painting using bright and day glo colors. None of that work survives and what does is highly prized.

So the discovery of a signed, dated, vintage portrait comprises a major event.

What follows is a press release.

In the fall of 2019, musician Mark Junglen contacted The Lily and Earle M. Pilgrim Art Foundation located in Washington, DC from Colorado Springs, CO with the image of a portrait signed by Earle Pilgrim and dated 1955. Its subject is American composer Samuel Foster Hall, b.1930, a 1950s private Boston University School of Music student now retired but still maintaining his office, Play It Again Sam, in Colorado Springs.

We knew Bajan/ American New York artist Earle Montrose Pilgrim (1923-76) had moved from Provincetown to Beacon Hill in 1954 with his wife, Lily; but we knew very little about this period in the erratic artist’s life, and nothing about Mr. Hall.

A brief telephone conversation on the eve of the pandemic told us very little beyond Sam’s story that they would meet at The Sevens Ale House on Charles Street to play chess and that Sam eventually sat for Earle in his 80 West Cedar Street apartment.

This summer the Foundation was able to schedule a visit with Mr. Hall for a viewing of the portrait at the offices of Play It Again Sam in Colorado Springs. Stories preceded the visit consistent with similar stories oft reported by Boston art historian Charles Giuliano, shedding more light on Mr. Pilgrim’s erratic behavior. At various points in their relationship Pilgrim had claimed he was Watusi and apparently at one point threw the finished painting in the gutter.  Finally, Mr. Hall’s wife was able to buy it from Earle, for about $100; after which incident, Mr. Hall never saw Mr. Pilgrim again.

From his Beacon Hill years, Samuel Foster Hall went on to live and work in New York City, San Francisco, and Colorado Springs, operating Play It Again Sam, a music business; and composing pieces that include “Concerto for Two Saxophones” and “Toward a New Horizon.”

Tune in to KCME on  October 28 and Halloween for  “The Legend of Sleepy Hollow” and again on December 20 and Christmas Eve for “A Christmas Carol“ produced by Samuel Foster Hall for KCME Classical Music Radio and sponsored by The Lily and Earle M. Pilgrim Art Foundation.  Both productions will stream at 8pm MST in honor of Mr. Hall’s contributions to the musical arts and his steadfast care of Earle Pilgrim’s 1955 Portrait of Samuel Foster Hall rescued from the gutter!

promotes the visual art of the African diaspora, an appreciation of artists who lack public recognition, and public access to art through best practices in the preservation and placement of culturally important artworks.