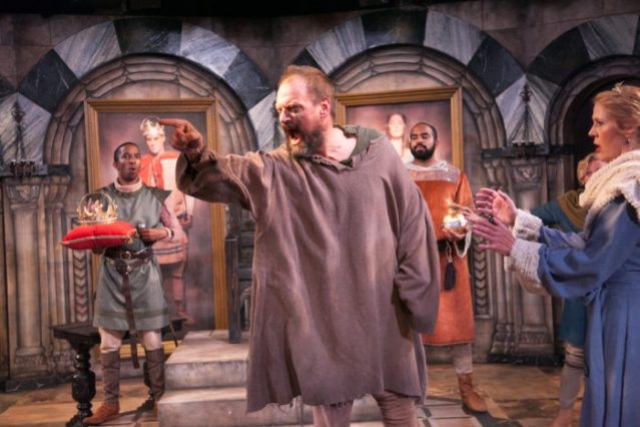 Remy Bumppo’s production of Pirandello’s Henry IV takes us on a wild ride in the mind of a man who may or may not be insane, may or may not think he’s the titular king. But this is not the Henry IV of Shakespeare’s parts 1 and 2. There’s no Sir John Falstaff moseying around to lighten the mood.

The absurdist playwright Luigi Pirandello wrote the play in 1922; the current production is based on an adaptation by Tom Stoppard. This is the story “set in our own time” of an Italian nobleman (Mark Montgomery), who is injured when he falls off a horse and wakens to believe he is the Austrian King Henry IV, the Holy Roman Emperor, on the throne in the 11th century. His privy councilors humor him by dressing in costumes of the period and the king thinks he is pursuing his feud with Pope Gregory and the church. This charade goes on for 20 years until finally the nobleman’s family decides to bring in a distinguished psychiatric analyst (Noah Simon) to determine whether Henry is in fact mad.

Nick Sandys’ direction makes the most of the witty dialogue written by the always engaging Stoppard. The play runs 95 minutes in two acts and two eras, 900 years apart, and you will never be sure which one you are in. The enigma of Henry/nobleman’s situation is either brilliant or maddening, depending on your tolerance for ambiguity. But there’s no doubt about the quality of Montgomery’s fiery performance. He is the star in an excellent cast.

Pirandello’s Henry IV opens with the privy councilors (Jake Szczepaniak is Landolf, their leader) welcoming a new councilor (Chris Vizurraga as Bertold). The scene is more like theater performers coaching a new performer in how to dress and behave in front of the king.

The first act sets the scene with family and hangers-on debating Henry’s situation. The dialogue is dense and it’s sometimes hard to keep track of who is whose enemy or supporter. But once Henry arrives, in sackcloth rather than royal robes, he creates an electric mood on the stage. In act two, relationships become temporarily clearer but ultimately will leave you wondering whether everything is merely a play.

I have said before that when I read that a play is rarely performed, I figure there is a reason. Pirandello’s Henry IV is an entertaining puzzle. Sandys’ director’s note says that the play reflects the “existential horrors and ground-breaking uncertainties” of post-world-war Europe. Looking at this Henry IV from that perspective gives it more gravitas and logic.