The Drowsy Chaperone in Boca Raton

Send Up of 1920s Musicals in South Florida 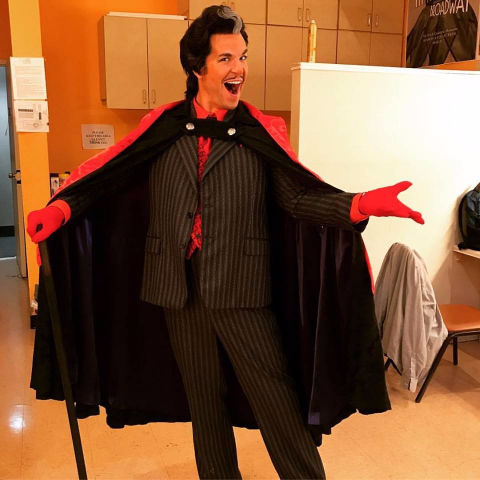 Folks attending the Broadway musical-within-a-comedy The Drowsy Chaperone might want to bring a large envelope or gift box with wrapping paper.

The show is so enjoyable – as is The Wick Theatre’s wonderful current production of it– that it’s hard to resist trying to somehow wrap the entire experience up or seal it and take it home.

Of course, theater is often to meant to make us think and provoke us, as it should. But let’s not forget the escapist aspect of this art form.

The Drowsy Chaperone never lets us forget. Neither does the Wick’s high-octane and hilarious production, which opens the Boca Raton company’s 2017-2018 season – its fifth.

A cast of convincing, robust actors nails the exaggerated style this show calls for. The performers, who display deft comic timing, impressive lung power and vocal range, are on hand through Nov. 12 to entertain you.

One can almost guarantee that you’ll receive a respite from headlines and developments that make you practically fear Armageddon is near.

To complain that The Drowsy Chaperone is inundated with stereotypes, low comedy, corny jokes, over-the-top performances and an ending seemingly contrived and all-too-convenient is to miss the point.

This show is a send-up of 1920s-era lighthearted musicals. You know, those shows which hardly placed a premium on three-dimensional characters or songs that serve the story and characters. Carefree, lighthearted fare dominates in these types of musicals. In The Drowsy Chaperone, a character referred to only as “Man in Chair” obsesses over these escapist tales.

We know practically nothing about him, but that doesn’t matter. We’re endeared to this man because he’s a musical theater buff. He represents the theater lover/fan/nerd within each of us. This eccentric is a charming, somewhat melancholy curmudgeon and bundle of nerves who lives alone in his dreary apartment. He spends his time listening to records of original cast recordings of show tunes from old musicals.

Man in Chair is our guide during an afternoon or evening of theater that dispenses with the “Fourth Wall.” He greets us and then addresses and interacts with us as though we’ve immediately become best buddies.

This nebbish of a man, giddy with enthusiasm, can barely hold back his excitement as he talks to us. The setting is his plain, drabby but spacious home, designed by Brittany Loesch. She dresses it up considerably as the musical-within-the-comedy comes into play.

Now here’s where it can get tricky: The Drowsy Chaperone is the title of the show we’re watching, but it’s also the name of the fictitious musical that Man in Chair so adores and wants to share with us. So he plays the musical for us on a record player, hoping we’ll at least give the show a chance. As the record begins playing, the musical, complete with all its characters, comes to life in his apartment. Some characters enter from his refrigerator. Others exit through a space in the wall through which the bed is put away for the day.

When Man in Chair stops the record player, the characters freeze or the lights dim. When he rewinds, the characters simultaneously revert to an earlier part of the musical. Meanwhile, this musical fanatic walks amid the action as though he’s part of the cast.

The characters are comprised of a variety of two-dimensional people, representing broad stereotypes. They’re at the center of a farce-like, slapstick-heavy tale about a wedding that better not happen – or someone is going to get hurt, courtesy of two bumbling gangsters. Man in Chair, at times, stops the action to offer commentary about the action and characters of 1920s-era musicals.

Actor Bruce Linser flashes an "aw shucks" smile and conveys a similar type of charm as the character. Palpable nervous energy, eagerness and an almost uncontrolled enthusiasm emanate from this musical theater fanatic. On a dime, he seamlessly switches from intensely irritable to extremely charming and apologetic for his outbursts, speaking in a sing-songy type of voice.

Jacob Thompson radiates sensuality, pride and heat as the stereotypical Italian lover Adolpho, striking exaggerated poses with flair. Listen to him whisper a word, and Antonio Banderas immediately comes to mind. Thompson is hypnotic and a hoot, whether he’s subtle or playing the character over-the-top.

As the wealthy widow and wedding host Mrs. Tottendale, Angie Radosh turns in a charming performance. She lends a flightiness to this forgetful but well-meaning and bubbly woman, who seems oblivious to how others perceive her eccentricity.

Scenery chewers include Jennifer Byrne as the bride, Janet Van De Graaff. She's the typical 1920’s starlet torn between remaining in show business and getting married. Byrne demonstrates impressive stage presence, charisma and star power, especially in the song “Show Off.” In the number, the character claims “I don’t want to show off no more,” suggesting she wants to leave show biz. Yet she sings the song in such a showy fashion, you can’t help but laugh at how her words and mannerisms seem at odds.

Laura Hodos shows off exceptionally strong vocal chops and the ability to hold a note long as the title character. The actor deftly plays the drunk, carefree and unsteady melodramatic diva, matching Byrne’s charisma, but with a darker countenance.

One of the show’s funniest moments comes during the song “Accident Waiting to Happen,” played by groom-to-be Robert Martin (a dashing Josh Franklin, who, along with others, performs a jaw-dropping tap dance). In this era of prohibition, some of the characters are concerned Martin will hurt himself tap dancing just before he is to tie the knot. So they put him on roller skates. It's a safer alternative, according to their logic. The characters also blindfold the groom-to-be, so he can’t see the bride before the actual ceremony.

Such hilarity turns The Drowsy Chaperone into crowd-pleasing pleasure you don’t want to end.

You may not be able to physically take the production home with you. But you’ll surely remember the catchy, hummable, humorous songs by Lisa Lambert and Greg Morrison.

They're songs from the kind of musicals your grandparents might have frequented.

The Drowsy Chaperone continues through Nov. 12 at The Wick Theatre, 7901 N. Federal Highway in Boca Raton. For performance times and ticket prices, call (561) 995-2333 or visit http://thewick.org.