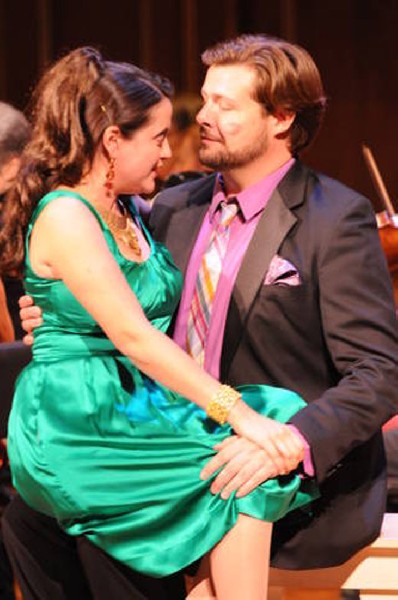 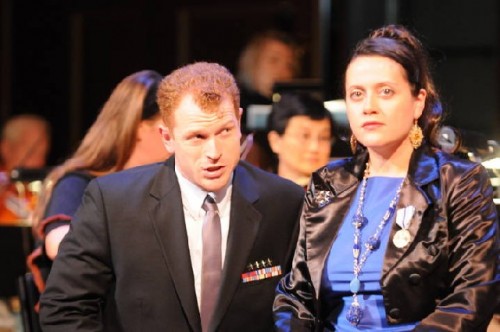 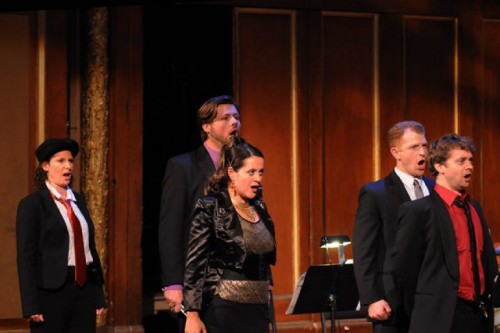 Preparing for battle, Partenope (Amanda Forsythe) is surrounded by her suitors. 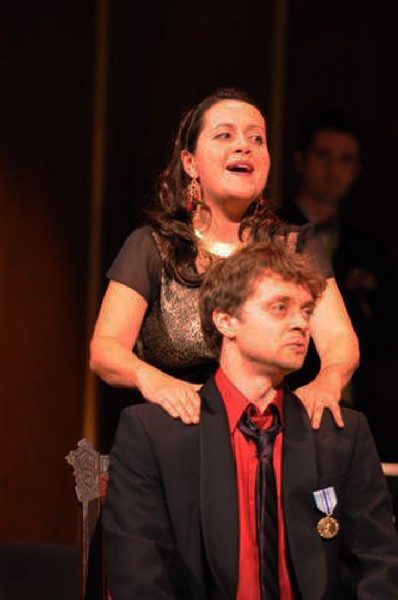 A flirtacioius Partenope (Amanda Forsythe) with her favored suitor, the young horndog Arsace, Prince of Corinth (Owen Willetts) who cannot make up his mind between two women. 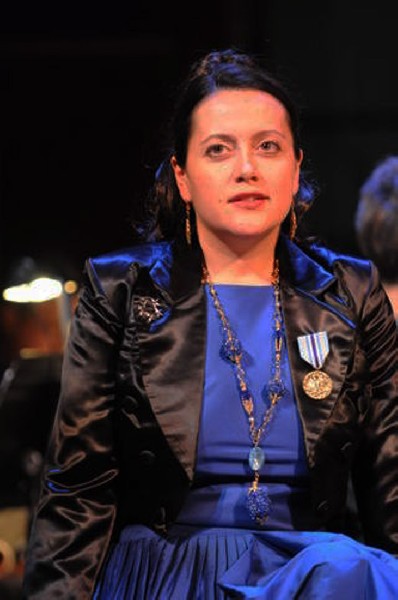 The sassy Queen of Naples (Amanda Forsythe) in a rare moment of quiet. 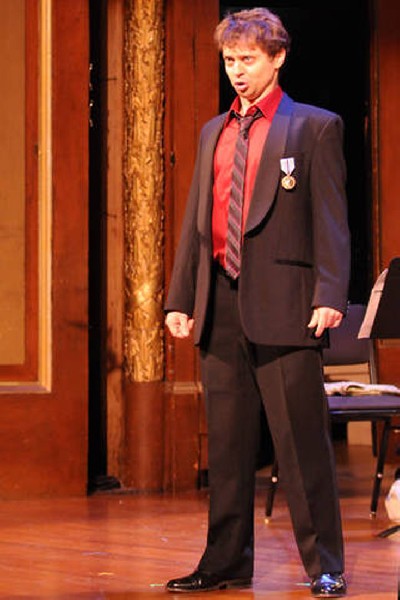 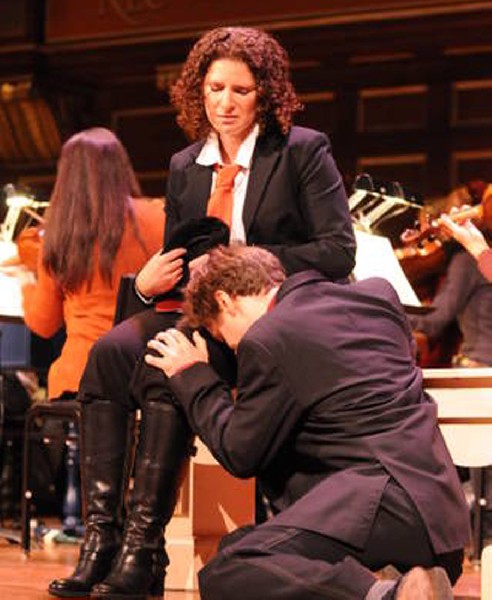 Prince Arsace (Owen Willetts) begs Rosmira, disguised as the prince Eurimene (contralto Kirsten Sollek), to forgive him for being fickle. 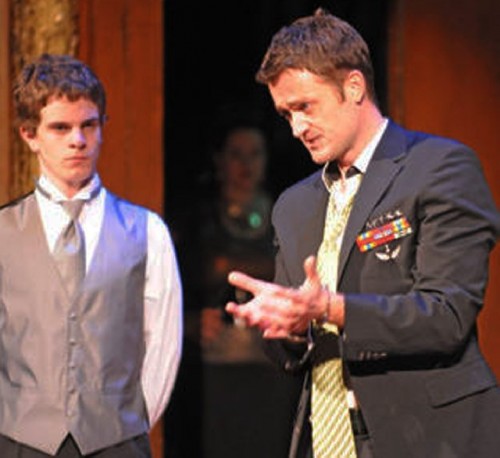 It’s hard to believe but as recently as 25 years ago the Italian-language operas of George Frideric Handel were rarely heard, while his English-language oratorios were a mainstay in Anglo-Saxon countries. Boston’s Handel and Haydn Society, the country’s oldest continuously performing music organization, was founded in 1815 to sing the “Messiah,” not “Guilio Cesare in Egitto.”

With the rise of the early music movement, that situation has changed. Although you can still get your dose of Protestant piety in the concert hall – Handel and Haydn is doing “Jephtha” in May and everyone does “Messiah” in December – you can also increasingly find Handel’s worldly, more continental, more Catholic operas performed in opera houses all over the western world.

Not just performed dutifully, but performed idiomatically and joyfully. “Ezio” was the first Handel opera I heard some 30 years ago; it was presented in the Boston Latin School auditorium by a small local company, which starred the popular discount diva of the era, Susan Larson. Admirably adventurous it was, but no one seemed to know what they were doing and the results were stiff and unintentionally comic.

Today, two generations of singers have been trained in the nuances of baroque style and can sing the highly ornamented music as comfortably as their grandparents sang Puccini and Wagner. For lovers of beautiful singing, the reason baroque opera exists, its popularity has proven to be one of the great pleasures in the music world today.

Handel wrote some 40 operas. Boston Baroque has done seven in the past decade, which is quite an achievement. Although some of them - “Giulio Cesare,” “Orlando,” based on Ariosto’s epic “Orlando furioso,” and “Rinaldo,” based on Tasso’s epic of the first crusade, “Gerusalemme liberata” - are as great as any in the repertory, others are less so. They all allow for a good show, however – first and foremost, Handel was a great showman – and they all include some beautiful singing, especially for soprano and high tenor (countertenor) voices.

“Partenope” is one of those enjoyable non-masterpieces, but although still a rarity, it has been increasingly done in the general mania for baroque opera that now prevails. It was presented in 1998 at Glimmerglass in Cooperstown, New York, and it was seen again at the New York City Opera only a few years ago.

Martin Pearlman, his stylish band of period-instrument players and the terrific cast of singers he assembled drew out the comic and musical elements of the score so it was a delight from the opening chords of the overture to the final chorus of understanding and reconciliation. It might be light and inconsequential, but it is a lot of fun.

The plot is period boilerplate. Written in 1699, it had already been set 23 times before Handel got to it – and it went on to be set another dozen times after.

The legendary siren Partenope has settled a city named after her (today’s Naples). In her court, two princes, Arsace of Corinth and Armindo of Rhodes, are wooing her. A shipwreck survivor who calls himself Eurimene asks for shelter, which Partnope graciously grants. Eurimene is really Rosmira, Princess of Cyprus and Arsace’s betrothed, and she has come to the court of her rival disguised as a man to see what her wayward lover is up to and to see if she can win him back. As if that were not complicated enough, Emilio, prince of the neighboring kingdom of Cumae, shows up with his army and offers Partenope his land if she will have him. When she rejects the offer, he vows war, and a battle soon follows; Partenope, of course, wins.

You can see how such a situation can lead to a number of serio-comic exchanges. And with a cast adept at comic acting, the comedy is played to the hilt, without falling into the slapstick or vulgarity larger houses like the Met or San Francisco have to adopt so the people in the balcony can understand why the people in the orchestra are laughing.

The baroque operas Baroque Boston and the Boston Early Music Festival each annually (semi-) stage at Jordan Hall demonstrate how well that concert hall adapts to small-scale opera. With about 1,000 seats, Jordan Hall is still larger than the houses where such works were originally produced. Yet, when Partenope is rifling through Armindo’s wallet and finds only a CharlieCard, everyone in the house can see it. Imagine that at the Met!

Oh, back to the plot. Let it be said that everything works itself out, Arsace goes back to Rosmira, Partenope picks Armindo, and Emilio, well, poor Emilio is sent back home, but he’s a good sport and joins in the final chorus.

It requires a crack orchestra, a vocally agile cast willing to let its hair down and nimble direction for the work to come to life, and Pearlman had all at his command.

He set the tone with the overture, which was light, lithe and unrelenting in its rhythmic thrust. He kept the opera moving fleetly, which helped to bring out the humor inherent in the text. Director David Gately, who directed Boston Baroque’s May production of Gluck’s “Orfeo ed Euridice” and earlier this month Massenet’s “Portrait de Manon” in B.U.’s Fringe Festival, shows himself to not be limited by minimal sets and costumes. Rather, he focuses on the drama and gets his casts to express in dramatic terms what they are also singing. The cast wore their own clothes, which largely worked. And credit should also be given to the droll supertitles written by opera multi-tasker, Cori Ellison.

First honors, however, go to the cast, which sings Handel as if they had heard in the cradle.

As Partenope Boston favorite Amanda Forsythe demonstrated again that she is one of the great early music sopranos singing today. And she can act in a way that brings her characters to vivid realization. She entered in a knee-length blue gown with a tight bodice that showed off her assets. Her hair was tied back at the top of the back of her head that made her “tail” swing like a horse’s when she moved, which she did as flirtaciously as possible. She played the Queen of Naples as if she were a cast member of the reality show, “The Real Queens of Naples (Florida).” Later, she switched to an emerald gown and in the battle scene – surely the least militaristic battle music composed before Shubert’s sissy-boy “Marche Militare” – she wore dominatrix black.

Vocally, Forsythe tossed off one bravura aria after another. The first of her coloratura show stoppers came early, after it was announced that Emilio had blockaded the harbor with his fleet. Love and destiny will guide her to victory, she sings, “I have a crown on my head, not chains at my feet.” Her ornamentation was chaste and clean, emerging out of text and music with no show-off singing for its own sake. It was as if Gluck’s reforms had been applied a generation early. Another lovely moment was after the battle, when she returns to Partenope (Naples), a “beautiful city on a beautiful day,” in which Forsythe displayed effortless high notes, her entire voice so sweet you can understand why all the men in her court were in love with her.

Of course, as played up by Forsythe, Partenope is a first-class cock-tease, which makes her a perfect foil to Arsace, an adolescent horn-dog who can’t make up his mind between the queen and his first love Rosmira. His indecision and the success of Rosmira’s disguise transform him into a wimp, a proto-Don Ottavio, mocked by the other suitors for his cowardice.

Still, his indecision is milked for comic effect. When he is with Partenope, he loves Partenope, and when he is with Rosmira, even as disguised as Eurimene, he loves her. Yet, as he sings in a lovely love-sick aria, “I feel love pierce me with new arrows, but the first one is the sweetest.” And again, “Which of these two beauties am I to abandon?”

As Arsace, Owen Willetts again demonstrated that he is one of the most exciting counter-tenors on the scene today. (He made his American debut with Boston Baroque as Orfeo in May.) Blessed with an effortless sweet top, he is also endowed with almost contralto-like low notes, a rare combination. Still, the role of Arsace didn’t suit his voice as comfortably as Orfeo did. He had audible vocal problems with the showpiece aria “Furibondo spira il vento” - (“As the wind whistles furiously and convulses heaven and earth, so I now feel my soul churned up by my sorrow.”)  - which has been recorded memorably by both David Daniels and Andreas Scholl. One hopes it was just a one-night problem, not a sign of deeper vocal problems.

Willetts redeemed himself in Act III with the sweet and tender “Ch’io parta? Si, crudele parto, ma senza cor” -(“And must I leave? Well, cruel maid, I go, but leave you with my soul.”) –sung after Partenope has sent him away. It was the first moment when he showed that his character is capable of real adult emotion.

The rest of the cast ranged from fine to merely adequate.

Boston tenor Aaron Sheehan in the relatively small role of Emilio was somewhat out of his ideal register as well, but he looked butch in his short haircut and sleek suit – usually he wears a wig with cascading curls and long brocaded jackets – and when his music rose, his sweet high notes reminded you of what a great singer he can be.

The disappointment, which, alas, left a hole in the center of the drama, was contralto Kirsten Sollek’s Eurimene/Rosmira. She was okay with no audible problems, but her singing just lacked the brilliance the work required, which Forsythe and Willetts, despite his one problem, displayed in memorable fashion. As the evening progressed one looked for one of her many arias that could have been cut: she became a drag on the entire proceedings.

Still, the evening was overwhelmingly a delight, and I can hardly wait to hear Forsythe, Willetts and Sheehan again. Fortunately, Forsythe will star in the June, 2013, Boston Early Music Festival production of Handel’s first opera “Almira.” And Sheehan will sing the lead role in Monteverdi’s “Orfeo,” which will be presented by the BEMF in its chamber series at Jordan Hall in November. About Willetts, we can only hope that Boston Baroque can bring him back again before the rest of the world discovers his unique qualities.