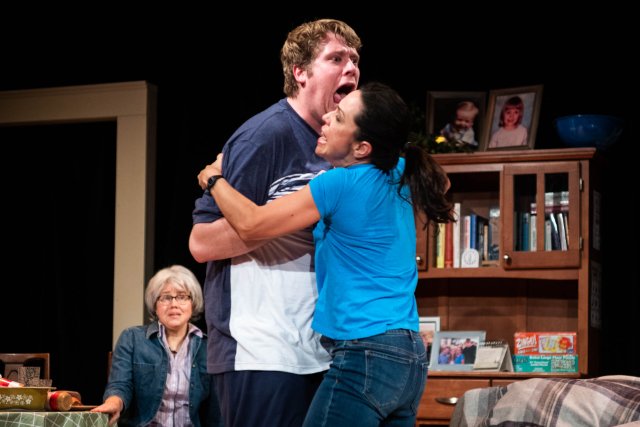 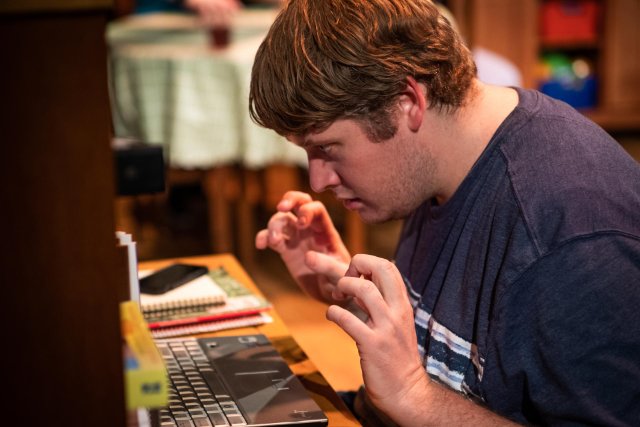 Photo courtesy of New City Players Josh (Timothy Davis) is in a world of his own.

But Jent hardly sugar-coats what the family of a severely autistic young man might experience as they try to make it through each day.

Surely, Jent should know. After all, she has a severely autistic son. He is much like Josh in Falling, which runs through Sunday at the nonprofit, professional, Ft. Lauderdale-based New City Players.

And if Jent were present for this superb production, she’d no doubt be thrilled. With Falling, New City Players is doing its best work in several years.

Indeed, each word, gesture and pause is blessed with emotional authenticity and spontaneity. The five-member cast is demonstrating how naturalistic acting should be done.

Of course, it helps that the theater space, with audience members seated on two sides of the stage, is extremely intimate. As a result, no microphones are required. Also, the performers can speak in conversational tones that you ordinarily hear while watching a movie.

Due to the first-rate performances and the theater’s size, we feel like we’re eavesdropping on the Martin family. They live in the suburbs of a Midwestern city in a comfortable home, designed with appropriate detail by Ryan Maloney.

To her credit, Jent doesn’t try to write about autism in all its complexity. In fact, while Falling centers on an autistic person, it jsn’t about Autistic Spectrum Disorder. Rather, the play makes us consider how we might deal with a situation beyond our control – one that makes us feel helpless and hopeless, and when there is no easy escape or “magic pill.”

While Falling is essentially a “kitchen-sink,” naturalistic drama, there is symbolism in feathers falling, which happens several times during the play.

And they might not always show it, but Martin family members surely feel at times as though they’re free-falling. To make matters worse, they don’t know when or where they’re going to “land” or who, if anyone, will “catch them.”

As an obvious disclaimer, Jent wrote in the script that “no two people with autism are quite alike. It’s a spectrum disorder and Josh is at the severe end of the spectrum.” With that said, the playwright has zoomed her lens in on the Martins. They’re a fictional family, based on her own experiences raising a severely autistic child.

The result is a jargon-free, sensitively-written play filled with humanity. In the playwright’s words, it is about “loving someone who is hard to love.”

Certainly, 18-year-old hulking and strong, yet child-like Josh can fall into that category. That is largely due to how scary he is when he turns physically violent. Further, “lack of resources or housing options” (the playwright’s words) compound the problem.

In the play, Josh’s parents note that even if such options widely and readily existed, red tape stands in the way.

But does Josh even belong in a group residence, where he may not receive love? Or, does he belong at home, where at least the capacity for love is greater?

The playwright offers no easy answers. Instead, she leaves us with much to consider as we exit the theater. But before we do, we have the chance to partake in a talk-back with cast members and mental health professionals. In fact, the playwright strongly encourages such talk-backs.

Fortunately, New City Players is including them as the “second act” of its production, following an intermission.

But first, the actors perform Jent’s award-winning and nominated play. It runs 75-80 minutes.

Among the acting challenges this play presents is the role of Josh. An easy way out would be to try to mimic someone on the spectrum. And a performer can run the risk of making light of such an individual.

So, credit New City Players Producing Artistic Director Timothy Davis, who portrays Josh with taste and care. He has obviously discovered the inner forces which drive Josh to act the way he does. The character, who has an under-reactive nervous system, compensates by almost constantly moving and controlling his visual environment.

In the role, Davis hardly talks, moves or gestures like himself. You never sense that he’s “acting.” Rather, in a masterful performance, the theater artist has transformed into 18-year-old child-like Josh.

At times, Davis is bent over, with a book, a video tape or another prop inches from his face. Childlike giggles escape from his mouth and he darts about the house with the energy of a kid during Christmas. It’s obvious Josh’s mind – and body – are in perpetual motion within his own world, as his eyes dart from one of his interests to another.

But that’s just the happy Josh, who performs a “happy dance” that will surely endear you to him.

However, when something bothers this young man, we’re keenly aware of it. An expression of anguish that’s hard to watch takes over Josh’s face and his eyes become either wide with fright or anger. In addition, his hands curl into fists, perhaps as a coping mechanism.

During at least one scene, Josh practically hyperventilates during a tantrum. It sounds and looks so real that you want to get up and comfort him.

Speaking of comforting, it’s obvious that Josh’s parents are used to putting him at ease. As mom and dad, a marvelously natural and nuanced Arlette Del Toro and Todd Bruno convey patience and understanding toward their son, even if they’re dealing with frayed nerves because of him.

As the mother, named Tami, Del Toro lends her character a playful demeanor during interactions with Josh. The actress finds the “kid” within her character, as she’s able to reach Josh at his level.

Perhaps this is a coping mechanism on Tami’s part. Specifically, she can distract herself, at least temporarily, from the challenges Josh presents.

Tami and her husband, Bill, also use humor to deflect attention from the harsh reality they face daily. For all its seriousness, Falling is a funny play at times. The humorous lines not only serve as comic relief but demonstrate how powerful humor can be while dealing with the uncomfortable realities of life.

However, we all deal with tough times differently. Some turn to prayer, such as “Grammy.” She is Josh and his sister Lisa’s grandmother, who comes to visit during the play.

Elizabeth Price plays her with an air of peacefulness, charm and understanding. To her credit, Price resists any attempt to turn Grammy into a woman who forces religion upon others. Rather, she comes across as a woman who finds peace in prayer and offers to gently show others how it can bring them healing as well.

While this woman finds a sense of calm in the Lord, Lisa deals with Josh by ignoring him. To her, he is little more than an annoying bug to be squashed. In the role, Abby Nigro manages to find the jaded, eye-rolling teenage girl in Lisa without resorting to stereotype. In fact, in spite of her hatred toward Josh, we never hate her. Rather, non-withstanding her ill feelings and the hurtful things she says, Nigro manages to make us understand her point of view. Lisa isn’t “wrong” in her viewpoint – and neither is any other character.

That’s part of this play’s strength; each character possesses valid viewpoints. We may disagree with them, but we’re willing to consider them.

Jent, who displays a keen ear for dialogue and writes with wit and pathos, has penned a play that opens our eyes and minds to a world with which we might not be familiar.

One might call Falling “Awareness-Spreading Theatre” or “Empathy Building Theatre.”

Regardless, it’s theater that’s necessary. Why? It provides a voice to those who may not always have one.

New City Players’ production of Falling runs through Oct. 27 at The Vanguard Sanctuary for the Arts, 1501 S. Andrews Ave. in Ft. Lauderdale. For tickets, showtimes and to watch a trailer, visit newcityplayers.org.