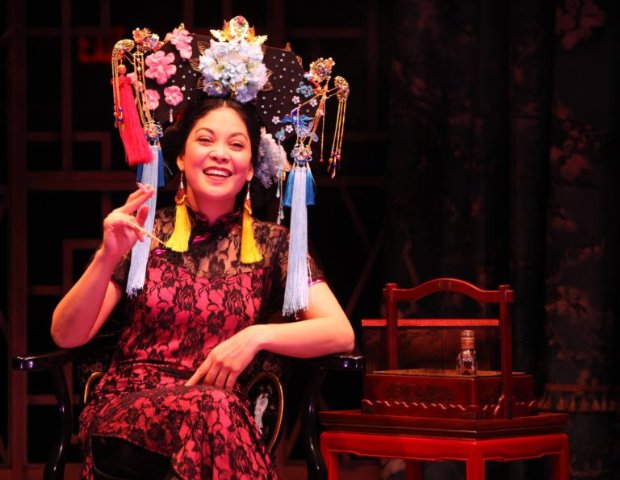 Imagine spending the working hours of three decades on display in the same room like an animal in a gilded cage, repeating the same scenario hourly, and narrating your actions in a language that viewers don’t understand. Imagine isolation from family and culture. Imagine having only one person to communicate with in your native language. That person is the translator of your patter, both on and off the “stage,” and who, either through ineptness or personal objectives, simplifies your spoken word to make you seem like a simpleton. Or is the communication distortion a playwright’s comment on cross-cultural communication?

These are the conditions depicted by Lloyd Suh in his two-person play The Chinese Lady.  This fictional account tells of the life of the real Afong Moy, who in 1834 at age 14, became the first Chinese female to step foot in the United States. Unique to her era, only in the 20th century did Chinese women begin to trickle into this country. To the audiences who saw her at various venues in New York City, and then touring, she was a window to the mysterious East.  The circumstances of Moy’s coming to the U.S. and expectation of her returning home are murky. But her bearing revealed a privileged class upbringing, and because of this polish, she was adept in depicting Chinese cultural practices in the exhibition, from using chopsticks to singing and dancing.

Rinabeth Apostol plays Afong Moy, and she is delightful. Most of her lines are delivered directly to the audience, and through comic chops alone, she is able to make words that are sterile on the page seem funny. For most of the play, she is a vibrant youth with Chinese mannerisms, but in middle age, her speech shades into a more American affect tinged with cynicism, and finally she speaks as an aging woman. Throughout, she commands the stage.

Will Dao is challenged to make something out of almost nothing in the smaller role as Atung, the translator, and he is the right man for the job. Through gesture and look, especially his oft-expressed, all-knowing smile, he divulges the character of his character.

In the play, the first years of Moy’s time in America map somewhat with reality, including a real-life visit with President Andrew Jackson, but later years diverge significantly, indicating that the playwright has something in mind other than a straight biography. At a personal level, perhaps the objective is introspection. In leering at Afong Moy, perhaps we should be reflecting on ourselves.

At a societal level, Suh uses Moy as a blunt instrument to hammer home points about European and American imperialism; our deplorable treatment of the Chinese; and appropriation. Beliefs are attacked as well. Moy retains her charm as she observes, for instance, falsehoods surrounding the Liberty Bell. But then in an admission of her own embrace of half-truths, she justifies that the accepted story is not true, but it is more interesting.

The viewer can see in Moy’s tales that scourges from history do return, if in different guises. In Moy’s speaking of Chinese workers doing the back breaking, high risk work in building the Transcontinental Railroad in the 1860s, we see the parallel to abuses of Chicano workers in the agricultural fields a century later. However, while the mostly Mexican workers were able to strike for better conditions, the Chinese had no leverage, and instead suffered further racial insult with the institution of the Chinese Exclusion Act of 1882 and its successors that lasted in some form until 1943. What was worse, Suh observes, was the violence that the Chinese suffered, with the destruction of many Chinese enclaves and the murder of many of their residents throughout the country.

Some theater goers may be adequately familiar with these events, so that little new is learned. For others whose knowledge of U.S. history is based on the sanitized version that we are taught in high school, it may be eye opening, if a bit didactic. For those who are interested to learn more truths about the history of real people in the U.S. rather than the “presidents and generals” textbook versions approved by state education boards, Howard Zinn’s A Peoples History of the United States is a good jumping off point.

In reality, Afong Moy’s paper trail disappears in 1850. That the playwright includes historical incidents many years later speaks to the lack of content in Moy’s life to work with, as well as his desire to make political points. In part, because little time is spent on the late 1800s, this period seems tacked on, without really being integral to main drive of the story line of her life. Another weakness in the narrative is that the two characters have a one-dimensional relationship. With limited scope of interaction and conflict, dramatic power fails to fully develop.

That said, Rinabeth Apostol’s performance is superb, not just the humor, but the occasional angst and rage as well. She portrays a sympathetic character whose plight causes us to ask many questions about who we are. The handsomely mounted production particularly benefits from Jacquelyn Scott’s scenic design, a Chinese themed drawing room that served as Moy’s performance enclosure. A beautiful curtain that fully surrounds the parlor rises and falls serving both to separate scenes and re-enforce the claustrophobic environment that Moy endured.

The Chinese Lady by Lloyd Suh is produced by Magic Theatre and plays on its stage at Fort Mason, 2 Marina Blvd., San Francisco, CA through November 3, 2019.