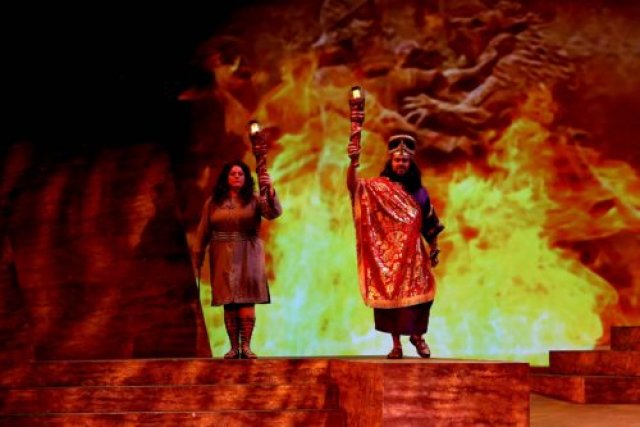 After the abject failure of his second opera Un Giorno di Regno, Giuseppe Verdi vowed never to compose again and prevailed upon his publisher Bartolomeo Merelli to cancel his obligation to deliver two more operas. While Merelli possessed more confidence in Verdi than the composer did himself, he capitulated to the request but kept pressing Verdi to read a particular libretto about the Babylonian conquest of Judea and the enslavement of Jews. That manuscript by Temistocle Solera was Nabucco, which became an 1842 opera that would set performance records for its era and establish Verdi as an acclaimed composer.

Nabucco evidences the Verdi sound and style associated with the masterpieces of his rich middle period. The music is melodious throughout, with demanding arias and complex ensembles, though none are among his more memorable. However, the overture, which includes many of the opera’s themes, captivates and is often performed on its own in concert halls. What particularly distinguishes this opera is the prevalence of the chorus, both in time on stage and contribution to the storyline. Indeed, most Americans would think that Verdi’s most significant musical passages would be arias from his greatest masterpieces. But to Italians, his most important single musical number is the Chorus of the Hebrew Slaves “Va pensiero” from this opera. With most of Italy under the Austrian yoke at the time of its premiere, Italians immediately identified with the victims. The melody emanates beauty and emotion, but benefits from its simplicity and singability. It became an anthem in the Risorgimento, the unification of Italy in the mid-nineteenth century, and has recurred as a touchstone of patriotism to the present day.

Although the framework of the story derives from the Bible, only the title character, who English speakers know as Nebuchadnezzar, is from that source, and even he is really a composite of Babylonian rulers. Both the overall plot and the characters are compelling, though narrative suffers gaps and lack of clarity that can confuse without prior knowledge. Threads are woven together concerning various aspects of power and love. Nabucco conquers Judea, but then suffers a period of madness and incapacity. His daughter Fenena has fallen in love with Judean Ishmaele, and she is being held hostage. Meanwhile, her presumptive older sister Abigaille (go see the opera for the revelation) seizes the throne, and further conflict of major proportions ensues.

The musical composition results in interesting tessitura and casting. Nabucco is written as a baritone, and Zaccaria, the High Priest of the Jews, nominally as a bass, meaning a tenor occupies only the third male lead role, an anomoly. On the distaff side, the role of Abigaille demands a highly dramatic coloratura with great power, range, fluidity, and ability to leap huge musical distances in a single bound – a hard bill to fill.

In casting Jason Duika in the title role, he and the company are snakebit once again. In the company’s I Due Foscari, an allergy attack left him at half voice, but he courageously performed so the show could go on. This time, one day before opening, the attack was so bad that it was clear he could not perform. Disaster! This role isn’t Figaro or Pinkerton, where there would be many ways to turn to find a stand in. Miracle! Roy Stevens, established bass-baritone who is currently Artistic Director of Opera Modesto, has played the role and was able to step in at the last minute. What gutsiness! His opening vocals did not bode well for the evening, but he strengthened quickly and gave an admirable performance with no perceivable missteps thenceforth, not only in voice, but in adjusting to the staging and other elements. Thank you, Mr. Stevens!

The most remarkable voice in the production is Christina Major as Abigaille, who in a sense is the real lead character. She totally fulfills the needs previously mentioned for the role. When at full bore her voice cuts steel, yet she can gently embrace tender moments and transition between the two with great facility. She is a vocal knockout. Baritone Benjamin Brady shows his heavyweight vocal credentials as Zaccaria. Exhibiting a particularly powerful and well-rounded midrange, his authoritativeness belies his youth. Mezzo Clauda Chapa as Fenena delivers volume without compromising the warm, smooth character of her voice. Tenor John Kun Park as Ismaele capably rounds out the lead cast.

General Director and Conductor José Luis Moscovich reveals his pluck in this undertaking with its challenging casting and heavy reliance on the chorus. But the company attracted a chorus of 30, which produces substantial sound and quality when whole.  The women’s side holds up well when singing alone, but the men lack a strong bottom and sound thin.