Actor's Playhouse at the Miracle Theatre 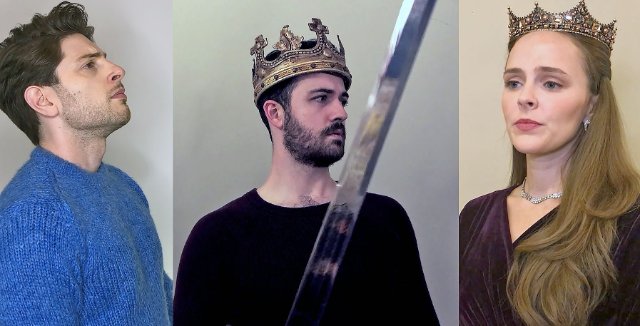 Photo courtesy Actors' Playhouse at the Miracle Theatre Pictured here are the trio comprising the “love triangle” in Camelot. Appearing from left are Nick Fitzer as Lancelot, Britt Michael Gordon as King Arthur, and Kayleen Seidl as Guenevere. 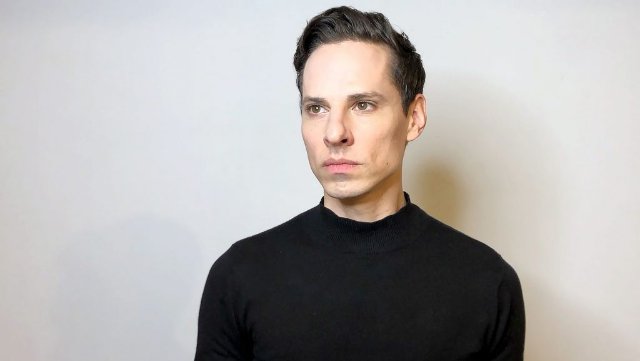 Picture this: Community leaders and politicians sit in a circle while calmly discussing policy and various issues. While they may not all agree, they’re listening intently to each other. Further, there is no name calling or any other kind of mudslinging. Indeed, if you had to describe the atmosphere in one word, “civil” or “respectful” would both work.

Especially in today’s divisive world, the aforementioned scenario sounds like a kind of ‘Camelot,” don’t you think? The aforementioned is the type of picture that might form in your head today, in 2020, while watching Alan Jay Lerner and Frederick Loewe’s classic 1960 Broadway musical, Camelot. Certainly, with everything going on in the world, many of us need Camelot, like a much-needed massage. We need to travel, if only in our mind, to an idyllic, problem-free, if pretend location that can serve as our go-to “happy place.”

Fortunately, the multi-award-winning, highly respected regional company, Actors’ Playhouse at the Miracle Theatre in Coral Gables, remained committed to bringing us Camelot (part of the company’s pre-pandemic season) even after COVID-19 shuttered theaters.

While the physical theater remained closed, cast members shot the action remotely from their homes before coming together to rehearse on Zoom for a week. The result is a scaled down, but no less glorious and polished, virtual production.

Four leading characters comprise the version of the musical that Actors’ Playhouse is offering. It’s a shortened version of one that David Lee created about a decade ago. And it’s available only this week online, on demand.

You won’t find elaborate scenery or costumes. Indeed, the actors have filmed themselves in simple, modern-day clothing. Moreover, they are performing against unadorned backdrops. But the simplicity of it all allows the cast and Artistic Director David Arisco to concentrate on the characters and the story-line. This version of the musical focuses more on the love triangle comprised of King Arthur, Guenevere , and Lancelot. The show lasts 80 minutes. That’s compared to the 3 ½ hours for the original production, and 2 ½ hours for Lee’s version.

But despite the significantly scaled-down version and much shorter run time, Actors’ Playhouse is presenting the musical with those same glorious, memorable songs by composer Loewe. Also present are Lerner’s clever lyrics, in addition to his compelling book. And close-ups allow us to more clearly see the actors and their telling facial and bodily expressions.

Speaking of the actors, they’re offering emotionally sincere, well-rounded performances. Mostly, they do not feel forced. And segues from spoken word to song and back are always smooth.

Leading the cast, Britt Michael Gordon presents a very human King Arthur. Gordon’s royal man is a modest, young, and fair individual. Further, he is not too proud to openly convey humility and vulnerability. As a matter of fact, he doesn’t even always wear a crown. Gordon makes us keenly sense King Arthur’s anguish when, for example, he learns that his supposedly trusted knight, Lancelot, is in love with Guenevere – the king’s wife. We see real tears stream down Gordon’s face, and his choked-up voice sounds authentic. At times, the actor speaks in a loud whisper. It gives Arthur’s emotions a quiet intensity. And it’s hard to look at the pained, torn expression on his face when King Arthur must confront his wife’s misdeed, but is hesitant to punish her.

Gordon possesses an expressive and pleasant singing voice, and the actor employs telling facial expressions and gestures. This is particularly true at the beginning, when an obviously stressed, weary King Arthur, his face a bit red, sarcastically and amusingly sings “I Wonder What The King is Doing Tonight.” Impressively, Gordon convincingly conveys King Arthur’s annoyance, while still  singing the song with humor, charm, and vulnerability.  In short, Gordon’s Arthur is the kind of fair, modest, yet firm ruler we’d all like to call our own.

Speaking of Seidl, she presents a spirited, dreamy, and loving queen who radiates joy. But Seidl also plays the character as a woman ahead of her time; she isn’t afraid to assert herself when necessary. In addition, the performer possesses a rangy, clear and expressive singing voice. It serves the queen well in songs such as “The Simple Joys of Maidenhood,” and ‘The Lusty Month of May.”

Meanwhile, Nick Fitzer delivers a vivid, intense performance as Lancelot. His wide, fierce eyes, and lowered eyebrows suggest dogged determination. At first, Fitzer’s Lancelot is proud, arrogant, and dramatic (perhaps a bit overdone). But the performer also transitions seamlessly into a fiercely loyal, sensitive, and emotional knight. Like Gordon as King Arthur, Fitzer is able to produce real tears. They drip down his face during particularly emotional moments. You never once doubt Lancelot’s sincerity.

Neither in this production do you doubt the sincerity of Mordred. He is Arthur’s illegitimate son who arrives in Camelot and considerably darkens the proceedings. In stark contrast to the other characters’ sunny, positive demeanors, Sean Patrick Doyle, appropriately clad in black, makes Mordred a devious, cunning villain. With his watery, icy eyes and sly voice, Doyle’s Mordred is like a sneaky snake.

Doyle doubles as a narrator. Curiously, in this role, the performer speaks in a dramatic, dark voice. It’s the kind you might expect from a person narrating a murder mystery, not a romantic musical. Is Mordred actually the narrator? If so, Arisco and Co. do not make this clear. On a more positive note, Arisco directs with sensitivity and attention to detail. Impressively, he helps the actors unearth the humanity in these characters, particularly King Arthur. Credit is due Arisco; he received more than 500 pieces of video after the characters shot the action from their homes. He and his technical team narrowed it all down to an 80-minute show.

One thing that has become clear about Camelot is this: It’s a musical with a split personality. The first half is bright, romantic, and sometimes humorous. Meanwhile, the second is considerably darker.

While some may complain about this, you might look at it this way: The idyllic kingdom of “Camelot,” in the second act, starts to slowly fall apart. Darkness and harsh reality replace it after Guenevere sins by committing treason. By the play’s end, the peaceful paradise we’ve come to know as the kingdom of Camelot is gone. War and disorder replace it.

Of course, “Camelot” cannot exist in real life. However, the character of Tom of Warwick might symbolically suggest that each of us must strive toward creating, or re-creating, a more just, peaceful, civilized world. As people who’ve watched the musical or the 1967 film version of Camelot know, Tom is a stowaway lad. His only desire is to grow to manhood and become a knight of the Round Table.  Arthur knights the boy. Then, he sends him running behind the lines, charged with spreading the story of Camelot. That way, future generations will know that this wonderous place called “Camelot” existed. Child actor Orlando Rodriguez offers a convincingly brave, and determined performance as Tom.

Fortunately, Arisco keeps Tom in this production. After all, his presence could symbolize the notion that children may, in some instances, need to lead the way in efforts to improve the world.

Actors’ Playhouse production of Camelot is available on demand thru Sunday, October 25. To purchase tickets, visit showtix4u.com. For more information about the show or Actors’ Playhouse, visit https://www.actorsplayhouse.org/