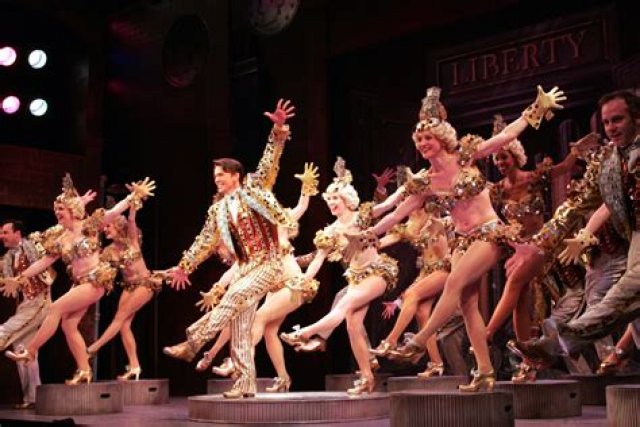 I couldn’t stop smiling, tapping my toes and wanting to sing along with the absolutely delightful production of 42nd Street at Goodspeed through Sunday, Nov. 6.

If we all need something light and warm, you could not ask for more. I certainly both needed this show and was enchanted with it.

From the opening number right through to the curtain calls, I wanted more.

The musical is based on the Busby Berkley film (that was actually based on a novel by Bradford Ropes) about Peggy Sawyer, fresh off the train from Allentown, PA with the dream of starring on Broadway.  It’s a backstage look at creating a musical during the heart of the depression complete with the producer who needs a hit and an ensemble that needs a job.

The best-known line from the film – and the show – is the now cliched, “Sawyer, you’re going out a youngster, but you’ve got to come back a star!”

Randy Skinner, who not only appeared in the original Broadway version in 1980 but was choreographer Gower Champion’s dance assistant both directs and choreographs this production, something he has done before. His expertise shows. He totally captures the spirit of the work.

Skinner shifts the focus from Peggy Sawyer (a fine Carina-Kay Louchiey) to the Dorothy Brock character. She is meant to be the star of this new show until an accident puts her on the sidelines. The shift in focus adds depth to the show; too often, Brock is played as either washed up or as a bitchy diva. Kate Baldwin shows us why she has multiple Tony award nominations and surprises with her tap-dancing ability. Baldwin creates a three-dimensional character instead of a plot device – showing us her mere tolerance for her wealthy boyfriend, her regrets, and in the end her basic humanity.

“The Shadow Waltz” has always been one of my favorite numbers and Baldwin does it proud. But this production gives her more dancing, and she shines whether it is “We’re in the Money,” or “You’re Getting to be a Habit With Me.”

These songs — they are all from the period — were written by Harry Warren and Al Dubin. You are bound to recognize many of them – from “Lullaby of Broadway” to “I Only Have Eyes for You” and others.

Skinner has ensembled such a terrific cast that you want to single out every performer. Blake Stadnik plays Peggy’s love interest, the performer Billy Lawlor who meets her and immediately is smitten. Stadnik manages to make this stereotypical character (the juvenile as it was called) into something more. Plus, he has a fine tenor voice that he uses to advantage in “Young and Healthy” and “Dames.” He can dance up a storm and lead the ensemble in dance numbers. He is so good that I am reluctant to mention that he does all of this while legally blind. Reluctant, because it seems to diminish the pure talent he displays. He is terrific with or without sight.

One of my favorite performers, Max von Essen plays producer Julian Marsh, which in the original musical was played by Jerry Orbach. Von Essen doesn’t get to show off his voice as much in this role, but he does get the big number – “Lullaby of Broadway” and utters the well-known line “Allentown! You’re going back to Allentown?”

Lisa Howard and E. Clayton Cornelious play the writers behind the show. Howard could tone it down a bit, but it is a minor flaw; she is one of the “comic” characters that every show of the period needs. She and Cornelious have a delightful duet in “With Plenty of Money & You.”

I haven’t given Carina-Kay Louchiey her due as Peggy. She makes the implausible story and the character seem real with terrific dancing and just the right combination of confidence, eagerness and uncertainty.

Skinner doesn’t let the small Goodspeed stage handicap him. Though the ensemble might be smaller than other productions of the show, they create the feeling of a cast much larger. He uses every inch of the stage; the choreography creates such patterns of dancers that you are convinced at least 20 or more are in the numbers.

Eloise Kopp who plays Annie (one of the chorus girls) always caught my eye with her dancing, singing and charm.

This production would not be so spectacular if it wasn’t for the costumes by Kara Harmon and the scenic design by Michael Carnahan. Harmon has designed ‘30s-inspired outfits that at intermission everyone was talking about. Her designs for Dorothy, including a fur coat at the opening, are just right for a star.

The projections and the equipment used – which I’m told were very expensive – by Shawn Duan really helped to create the setting and the locations without taking up room on the stage. I wanted to “ooh” and “aah” at them

I know I have left out many others from the cast and production team that should be praised.

42nd Street  is a show I would love to see again. Get tickets at Goodspeed.org.