It’s a Grand Night for Singing

Songs of Rodgers & Hammerstein at Goodspeed 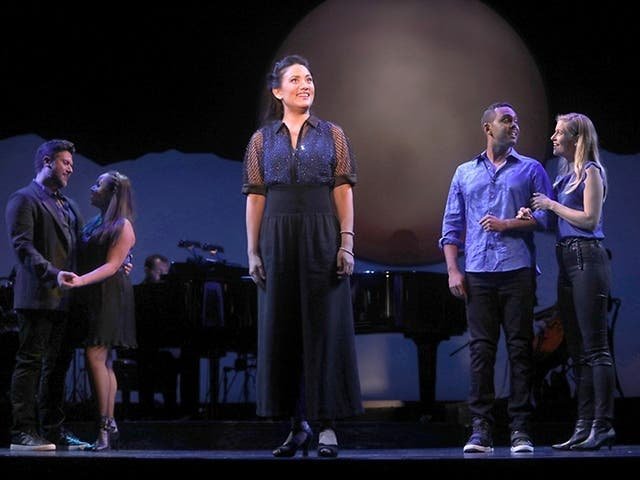 BRAVO – to Goodspeed, Rob Ruggiero, Adam Souza and the talented cast that make It’s a Grand Night for Singing such a delight.

Goodspeed is known for its high quality productions and director Rob Ruggiero is known for his ability to bring freshness to familiar material.

Both have exceeded expectations in this production which runs to Sunday, Nov. 28

You might consider a review of the songs of Rodgers & Hammerstein to be “old hat;” why bother seeing a show with songs that are so familiar to all of us.

See it because Ruggiero and the cast take these songs and bring a newness to them with sometimes subtle twists that carry them in the 21st century.

What does that mean? No, none of the songs become hip-hop or rap, none are jazzed up beyond recognition.

What Ruggiero and his cast have done is to be respectful of the wonderful Rodgers melodies and insightful Hammerstein lyrics while still making them sound fresh and new.

Sometimes, it is just a matter of who is the singing the song that gives you the “ah-aah” moment. A terrific example is the song, “I Cain’t Say No” from Oklahoma! Rather than have it sung by a girl to her boyfriend, here it is the boyfriend who is singing it. Or from the same show, “Kansas City” is now sung by a trio of women who are amazed at the big city.

It’s the little things like these that make it so delightful.

While many very familiar songs are included, the show also recognizes some of the fine Rodgers-Hammerstein songs from less successful shows – Pipe Dream, Me and Juliet, Allegro and Flower Drum Song,

One of the highlights of the show for me, was “Something Wonderful” from The King & I which is first sung in English and then Spanish by Mauricio Martínez, a fine baritone. He also shines in “Hello, Young Lovers.”

Ruggierio and Martínez gives “Maria” from The Sound of Music a fresh feel when it is about a smitten lover talking about his girl rather than the Mother Abbess singing about a would-be nun. It forces you to really listen to the lyrics.

Thirty-two plus songs fill the two hours (including intermission) in a way that causes you to want it to go on. You might argue why some songs were omitted, but it is a blend of the familiar with the unfamiliar, with a slant towards familiar songs. I would have liked a few more of the lesser known melodies but I wouldn’t have omitted anything that was included.

Scenic designer Brian Prather has created a simple set that features a large circle that can become, the sun, the moon or anything else. He’s left plenty of room on the stage for the musicians – a six piece ensemble – and the performers. Lighting designer Alan C. Edwards takes full advantage of the flexibility of the set to establish mood. Special praise to Jay Hilton for his fine sound design. The balance between the voices and the ensemble is perfect.

The cast is top notch and each has his or her “moment in the sun.” Jesse Nager uses his tenor voice to advantage in “If I Loved You” and “Love, Look Away,” while Mamie Parris is touching in “We Kiss in a Shadow” and in the ensemble work. Jasmine Forsberg showcases her versatility with “Shall We Dance?” with Jesse and “The Surrey with the Fringe on Top.” In that number, Jesse’s reactions are terrific. I can’t forget to mention Diane Phelan whose work in “All at Once You Love Her” is touching.

The musical ensemble includes a harp and cello as well as the more usual reeds, bass, percussion and piano.

For tickets visit Goodspeed.org which also lists the Covid protocols.