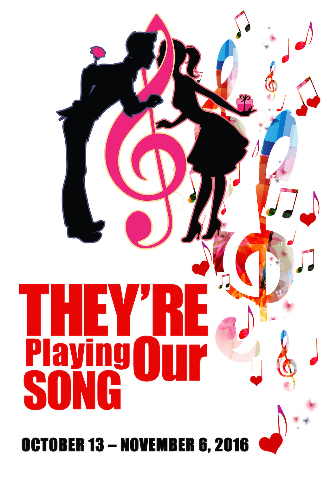 She originated the role of Annie in the musical with the same name in 1977.

Today, almost 40 years later, you’ll find Andrea McArdle on the Wick Theatre stage, co-starring in a musical that made its Broadway debut just about two years after her Broadway bow.

It’s little wonder that The Wick Theatre is the place to be for Boca Raton-area theatergoers now through Nov. 6. That’s the last day for the Wick’s current funny, touching, sweet but not sugary production of the Tony-nominated musical “They’re Playing Our Song.”

Add the fact that the musical’s book was penned by Neil Simon, one of the theater’s most popular, prolific, funny and successful playwrights, and this show has become one tough ticket. Calling this production South Florida’s “Hamilton” may not be too much of a stretch.

McCardle and James Clow, who’s also appeared on Broadway and is no stranger to Wick audiences, are delightful in “They’re Playing Our Song.” It’s based on the real-life working relationship between the musical’s composer, Marvin Hamlisch and its lyricist, Carole Bayer Sager.

Part of the musical’s humor stems from the fact that Walsk continues to be her kind, disorganized, modest self without realizing how much it annoys Gersch. She only learns how much it irritates him after he aims one of Simon’s signature wry one-liners at her. Like a perfectly shot dart, each sarcastic line lands in bullseye fashion. Walsk is sensitive, but none of the sarcastic zingers pierces her heart. She’s just made temporarily aware of her eccentricities, only to repeat them all over again.

There are plenty of times when the two appear to have run out of patience with each other. But as the musical proves, relationships trigger positive moments and aggravating times.

It’s nothing we don’t already know. “They’re Playing Our Song” isn’t groundbreaking in the romantic musical-comedy genre. But it’s an honest, relatable portrayal of two people who, despite their differences, are trying to make their collaboration work. The duo keeps forging ahead. That’s one reason why they’re easy to root for.

One area the show doesn’t focus much on is the collaborative process between composer and lyricist. We gain little insight into that creative process. However, such insight is reserved for shows such as “Sondheim on Sondheim.” “They’re Playing Our Song” is more about how personalities at times clash and mesh in relationships.

It would be a mistake to portray Gersch as an overtly arrogant SOB, but Clow, under Norb Joerder’s astute direction, never falls into that trap. He nails the one-liners with just the right ironic tone without overdoing it. Clow also conveys a sense of superiority without being unlikable and invests Gersch with a tenderness, affability and sincerity during appropriate times.

McArdle disappears into her role, transitioning smoothly from a naïve state to insecurity, sympathy, anger, nervousness and sexiness.

Each character has a “Greek Chorus” of sorts, representing different aspects of themselves. Unfortunately, in the production, the performers in the chorus do little to differentiate one personality from another. They’re also dressed alike, which fails to reinforce their differences.

Both performers are blessed with expressive, emotionally-heartfelt singing voices, which they wrap around Hamlisch and Sager’s music and lyrics, accompanied by a vibrant live orchestra. The songs range from the delicate, romantic “When You’re In My Arms,” to the upbeat showstopper “They’re Playing Our Song.” The lyrics, meanwhile, are tender and expressive.

Hamlisch is perhaps best known for composing the music to “A Chorus Line,” for which he shared a Tony and Pulitzer with the show’s other creative artists.

Sager co-wrote many of her 1980s songs with her former husband, composer Burt Bacharach and was inducted into the Songwriters Hall of Fame in 1987. She’s received many awards.

Simon needs little introduction. His keen insights into human behavior, knack for writing comedy and finding the humor in moments of pathos are legendary.

In “They’re Playing Our Song,” his humor ranges from the sardonic to the light-hearted. As he’s done with some of his best work, Simon combines funny with serious material.

Attention-grabbing aspects of the production include the varied set designs of Kimberly Wick. Her depiction of Gersch’s upscale Manhattan apartment is luxurious and detailed. By contrast, Walsk’s apartment is cramped and older, suggesting her finances aren’t as deep as those of her song-writing partner.

Linda C. Shorrock’s costumes are appropriately upscale, while Josieu Jean’s projection designs include a gorgeous depiction of Manhattan and a breathtaking, elegant and romantic nightscape.

Benjamin Weill’s contrasting lighting is bright during upbeat songs such as the title number and darker during more romantic, gentler songs.

At one point during the show, Walsk, sensing her relationship with Gersch isn’t running smoothly, wonders aloud what’s wrong with them.

The answer’s simple: Nothing. Relationships have their dark and light moments. It’s how you react during the tough times that will ultimately determine whether the relationship lasts, Simon seems to say.