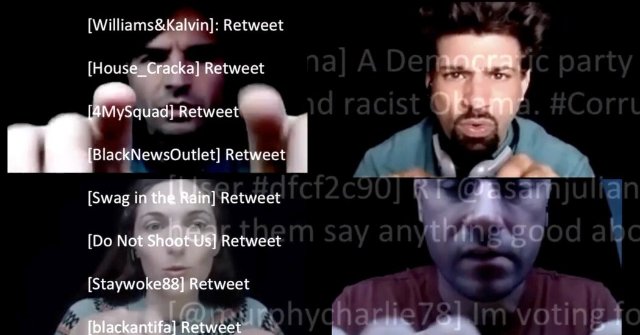 TheaterWorks is streaming live a production of Russian Troll Farm – A Workplace Comedy by Sarah Gancher. It is available through Nov. 2; the actors are performing from three different sites.  It’s a coproduction with TheatreSquared of Fayetteville, Arkansas and in association with The Civilians.

In the Covid era, any live theater should be cheered, but this play and this production pointed out some of the difficulties in attempting this.

But first let’s look at the play itself. While it is billed as “a workplace comedy,” it is a very dark comedy and could more accurately be subtitled “a political nightmare.” The play is set in Russia in 2015-16, where the security services are employing a group of tech savvy people to promote the candidacy and election of Donald J. Trump. (They all have been to the US.)

Some of us may think of Trolls as those Scandinavian dwarf mythological figures from childhood stories. But the word has a different meaning relating to social media. As Meriam-Webster dictionary defines it: it is to “antagonize (others) online by deliberately posting inflammatory, irrelevant or offensive comers,” or “to harass criticize or antagonize (someone) especially by provocatively disparaging or mocking public statements, postings or acts.”

So this group is using social media to achieve their ends. They send out thousands of tweets, Instagram and Facebook posts with provocative hashtags and links to dubious sites. We see them starting a thread and then developing it, taking a rather innocuous post and blowing it up into a scandal.

One such that Gancher shows us takes a statement that there are tunnels under Disneyworld (I have no idea if this is true at all) and blows it up to tunnels that are kidnapping immigrant children from as far away as Colorado (the tunnels supposedly extend that far) and then tying it to the fabricated idea that Hillary and Bill Clinton are pedophiles who are involved in running a ring.

Some of you may recall that a similar rumor started in 2016; that a pedophilia kidnapping ring was being operated out of the back of Chinese restaurant in Washington, D.C. This is still making the rounds of the dark web.

The play focuses on four workers in the unit — Egor who is obsessed with achieving higher and higher numbers of daily posts; Masha, the newcomer and former journalist; Nikolai the supervisor and Steve, brash and sardonic. In addition there is Ljuba, an older woman who oversees the operation. She has survived the various Soviet regimes dating back to the 1950s.

If we look at it as a workplace comedy, we have the budding relationship between Masha and Nikolai, Egor’s obsessiveness (and lack of humor) and Steve’s scheming and manipulating everyone. In fact he enlists Egor’s help in first bringing down Nikolai and then bringing down Ljuba.

Given my feelings about the last presidential election and the subsequent claims of Russian interference and the fact that we are just weeks away from another presidential election, it was hard to see humor. Rather than comedy it was more a horror story, perhaps appropriate for the Halloween period.

The play was directed by Jared Mezzocchi and Elizabeth Williamson, who has been associate artistic director at Hartford Stage.

The actors did a very good job with the material, but some of the directorial choices were more questionable.  The directors tried to convey the idea that we are looking through the computer screens at the various workers; this means that we have practically all close-ups and some extreme close-ups as someone leans into the screen to look at something. The costuming was modern street dress but there little attempt at scenery.

Ian Lassiter plays Steve as any office know-it-all with vast ambition while Haskell King’s Egor seems almost oblivious to what is going on around him. The most interesting performances were Mia Katigbak as Ljuba and Danielle Slavick as Masha. Both endowed these characters with more humanity while maintaining the cynicism with Masha and the devotion of Ljuba to the Russian cause. Of course, we learn more about the backstory of these two which makes them more interesting.

With any live stream, you to accept that there might be technical glitches. It is just part of the technology and so you must go with the flow.

The problem when that occurs is that if you aren’t totally engrossed the work, you can get distracted and have difficulty refocusing when the technical issue is resolved and the stream begins again.

Visit TheaterWorks for information about tickets to see this production.