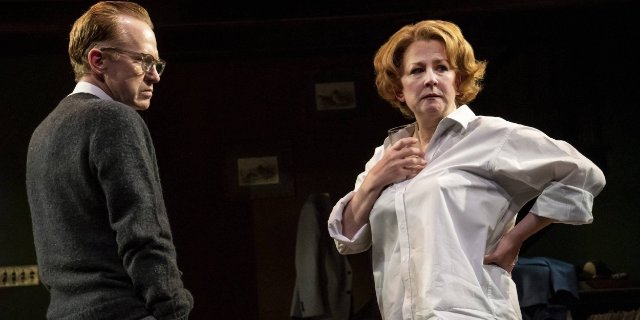 Edward Albee’s Who’s Afraid of Virginia Woolf? hit the Broadway stage in 1962 like a nuclear bomb. This was a searing depiction of a couple eviscerating each other with graphic language and physical conflict.

Yet, it is a comedy.

The audience at the Yale Rep laughed more than they gasped in this production directed by Artistic Director James Bundy that runs through Saturday, Oct. 29.

Each production – cast and director – brings out something different in the play. At first glance, this story of a boozy night with a dysfunctional but long-married couple and the collateral damage to their guests (a young married couple) can feel like a horror story.

George, a professor of history at a small New England college, and his wife, Martha who is the daughter of the longtime president, arrive home after an obligatory faculty party hosted by her father. Both of them are the worse for drink, but Martha shows it more.  It soon escalates into a fight that seems all too common to them. It’s 2 am when Martha announces she has invited a newly hired faculty member and his wife to stop over. George is horrified, but the doorbell rings and there are Nick and Honey

The booze keeps flowing and like a truth serum, secrets, grudges, and perhaps even the truth emerges.

The question for the audience is what will happen after the dawn comes and the guests depart? Perhaps Martha and George have broken through the lies and self-deceits and are ready to move on. Will Nick and Honey’s marriage be able to withstand the truths that were revealed?

Director Bundy and René Augesen and Dan Donohue as Martha and George, manage to convey that these two people – as dysfunctional as their relationship may be – truly and deeply love each other.  In other productions this often  gets lost in the fighting, obscenities, insults and lies that they hurl at each other. Because of this, the play in this production ends on a more optimistic note.

Yet the same is not for Nick and Honey. When they finally leave – the sun is coming up – you feel they are defeated. They have been forced to confront their self-delusions and the truths they have tried to deflect.

In that sense, George and Martha are the most honest. (Parenthetically, Albee may have been making a subtle reference to our first president and his wife in the names of the characters).

This is not a play for romantics. Usually, the older audience members laugh the most while the younger couples seem the most shell-shocked by it all.

Augusen and Donohue may initially look young for the roles, but these two experienced actors know how to pace themselves. Augusen is not afraid to make Martha the uninhibited – even lascivious – character she is and a nasty drunk, with a belittling way. As Albee wanted, you feel sorry for George who seems to be trapped by his middling talents as a history professor (another subtle reference) and the fact that her father controls his job prospects.

Donohue begins his performance on a lower key than Augusen, perhaps because he is a quieter drunk or just quieter in general. But he slowly takes control, first making mincemeat of Nick and later almost destroying Martha.

Nate Janis as Nick and Emma Pfitzer Price as Honey seem unable to totally inhabit their characters. We get the physical postures and gestures, but the underlying truth seems to be missing. It is hard to feel sorry for the neurotic Honey while Nick appears to be both arrogant and calculating.

Overall, this is a very good production of an important American play and playwright.