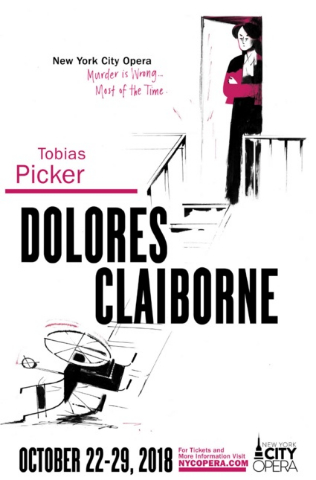 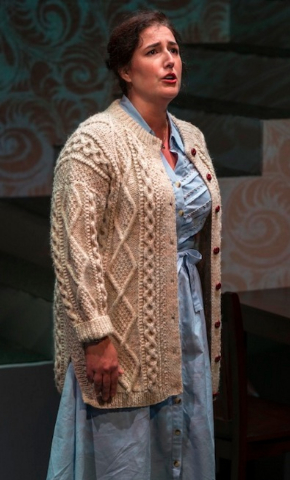 Dolores Claiborne is a 2013 opera by one of America’s pre-eminent composers, Tobias Picker. He picks good stories, An American Tragedy and Thérèse Raquin among them. Death is usually central, but this is opera, and being pushed into a well and tumbling down stairs to a certain end feel just right. This is the first story Stephen King has given permission for a translation into opera. His confidence is rewarded.

The newly revived New York City Opera made a wise choice in venues for Dolores Claiborne. 59E59 Theatres has a reputation for excellent productions. NYCO fits in.

Theatre A seats 196 and is steeply raked. From the top, you look down at the stage, but in the brilliant conception of John Farrell, you look directly at a balcony where a ferry deck plows through the sea, and at laundry wafting in the breeze and trees waving as an eclipse starts.

The cast throughout is first-rate. Lisa Chavez, familiar to NYCO audiences in Florencia in Amazonas, takes on the lead role, and dominates the stage.

In one of those superb Farrell touches, we first meet her being interrogated for the murder of her employer. We can see her reactions up close as she is photographed on stage and projected large onto the wall behind the stage right platform area. The set is rich in detail. From the worn white walls on the exterior of Dolores and Joe's less than modest home, to the tall bay windows framed in honey-gold wood with glass subtly stained, the worlds of the poor and the rich are created.  The drama is in part about class. The title role is a servant in the home of a 'high and mighty' employer. Over time the women become friends, bound by a common background of spousal abuse.

Chavez has a large, clear voice, but she can bite into words. The dialogue with her husband is full of low life language we seldom hear on the opera stage. It works for the drama.

The opera is difficult to do well. To keep the psychodrama and reveal character in action is a challenge. Michael Capasso, the general director of the company, takes the helm here. In a piece that could well drift or drop into camp and squirmy moments, he navigates the treacherous emotional territory with music as his guide.  He accents scenes with Dolores picking up a bottle to swig, just as her husband did.  An elegant dinner she serves will be her husband's last supper.

Picker with his librettist J.D. McClatchy, expose and underline the dilemma of a man deprived of sexual satisfaction, and a woman who provides the family’s bread and butter. This is not the usual opera fare.

Lianne Gennaco sings the couple’s daughter Selena. In her life arc, from a young girl who is being abused by her father, to a successful Boston lawyer, her voice remains sweet. Sections are hardened when she leaves home and carves out a successful career. Men come and go, suggesting the consequences of her father’s transgressions. She has the opera’s loveliest aria  delivered from the upper region of the stage. Her need for her mother who she resents for eliminating her father, abuse or not, is palpable in her lyric lines.

As the father, Thomas Hall captures the raw vitality and disappointment of a man buried in booze and desire. He and his daughter share a playful but also ominous song based on “Ding Dong bell, pussy’s in the well." Here, "Daddy is in the well,” with all of the images ‘well’ provokes.

Mistress of the grand house portrayed by Jessica Tyler Wright is commanding at the start. She demands that every order be delivered with precision by her maid, Dolores. Yet the women bond as time goes by, and both of them show the sweetest part of themselves in their close relationship.

This NYCO production is the world premier of the chamber version, which suits the music and story well. When only a tuba underpins a vocal line, the texture seems spare. Overall, the orchestra under Pacien Mazzagatti brings forth the complex textures of the composer. It evokes a tough world where, from time to time, bits of loving kindness come through gritty struggles.

The grating often dissonant lines of Dolores and Joe are contrasted with the romantic tones of Selena and Vera. The trio and quartet are rich moments.

Cherry picking venues is a smart tactic for NYCO. Smaller venues can be used to test the viability of a work. Dolores Claiborne deserves a broader audience and longer run. It is superb opera in a terrific production.