One Night In Miami 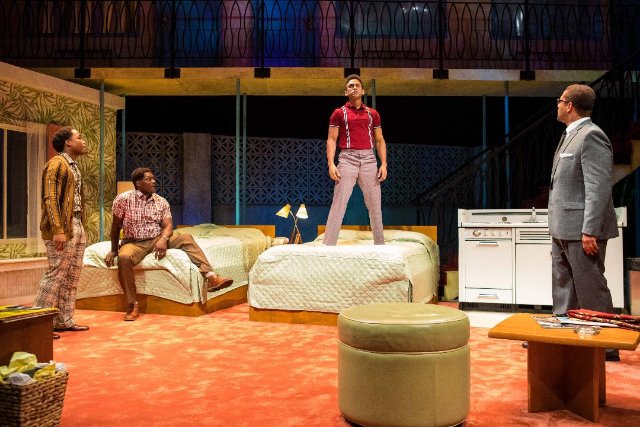 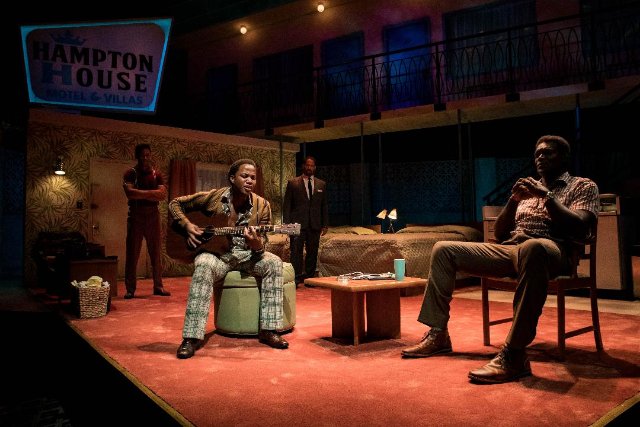 Photo courtesy of Miami New Drama. Soul singer Sam Cooke (Leon Thomas III) gets lost in his music as the others either listen or look on in One Night in Miami. 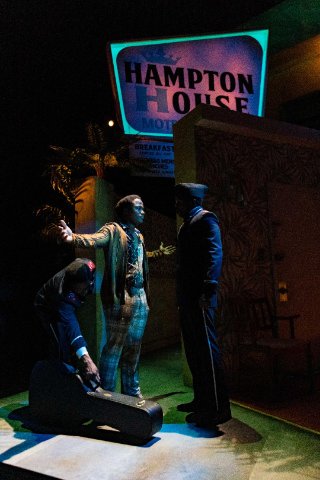 One Night in Miami is about a celebration following an underdog boxer’s victory in a big battle.

To be sure, the play can instill hope.

However, in Kemp Powers’ taut, tough, poetic and complex work, there’s a much larger battle facing the characters and others in 1964 Miami.

The epic struggle depicted extends well beyond a boxing ring. Furthermore, it bears a frightening similarity to today.

Miami New Drama opened a strong, stirring mounting of the play at Miami Beach’s Colony Theatre. It was eerily the same day that a suspect shouted anti-Semitic slurs during a service at a Pittsburgh synagogue before opening fire. Tragically, 11 people were killed and others wounded.

Previously, on Wednesday, a white man with a history of violence allegedly shot and killed two African Americans, apparently at random, at a Kentucky Kroger store. According to news reports, the shooting occurred after he failed to enter a black church.

But that wasn’t the end of this harrowing week: A jittery nation remained on edge as someone sent pipe bombs to prominent officials critical of President Trump. On Friday, authorities arrested a suspect who’d reportedly ranted against Democrats and minorities. Indeed, with all that’s happened recently, it’s easy to envision guards patrolling places.

With this in mind, theater has a responsibility to reflect what’s happening in the world and encourage reflection and response to improve the world.

And so, in a wise, symbolic directorial choice by Carl Cofield, guards stand at attention on either side of the stage. They face us, even before the play starts. There is no curtain.

Of course, the responsibility of these fictional guards is supposedly to protect the real-life historical characters in Powers’ slice-of-life bio-drama. Specifically, that character is Nation of Islam preacher Malcolm X. The play depicts one night in his life, boxer Cassius Clay (soon to call himself Muhammad Ali), NFL star running back Jim Brown and superstar soul singer Sam Cooke. They’ve gathered at a Miami motel one night in 1964 to celebrate Clay’s improbable victory in Miami Beach against Sonny Liston to capture the world heavyweight title.

Of course, the men cheer and holler -- Clay was a huge underdog.

But there’s also tension and rancor between these historical figures as they grapple with a variety of issues and questions. For instance, at the time, should an African American use his or her talent to help bring about change? Or, should he/she merely seek to entertain? These questions set up one of the play’s major conflicts. It pits Malcolm X against the younger, boastful Cooke. The preacher wants the performer to use art to improve the plight of black people, rather than merely put on a show.

Powers, whose play could benefit from more exposition, continues to use battle language well into the play. It reminds us of today, when people are speaking out and taking stands through advocacy in other ways.

Sam: I can’t count how many times I wanted to just reach out and punch somebody.

Malcolm: Then why won’t you strike with the weapon you have? Your voice! Black people are standing up, speaking out. You have possibly one of the most effective outlets of us all and you’re not using it to help the cause.

While the conflict of advocacy-driven art vs. entertainment is prominent, it’s not the only one. In fact, in his less than 90-minute play, Powers seamlessly blends multiple plot strands. In addition, One Night in Miami doesn’t seem jumbled. Rather, themes of tenacity in the face of adversity, the power of community and friendship and following one’s heart coalesce into a character-driven drama about planting seeds of reform.

Without a doubt, Miami New Drama, like the play’s characters, is a bold company that doesn’t shy away from controversy or staging daring works. More specifically, the company aims to reflect the diversity of its community and stage plays telling Miami’s story.

In this case, many might be unfamiliar with that night’s gathering between these young men who would become world famous.

While the celebration happened, Powers’ play imagines what the men said and did at the Hampton House Motel & Villas in then-segregated Miami. They’d wanted to party and stay in Miami Beach. However, segregation laws didn’t allow that.

By the way, it’s probably no accident that these individuals ate vanilla ice cream that night. At least one or two characters roughly sink their scooping utensil into the container. It’s as though they’re taking out their frustration on something white. The ice cream becomes a sort of motif.

Although these men would become legendary figures, Powers doesn’t deify them. Instead, he portrays them as ordinary individuals. Sure, the often-controversial Malcolm X sometimes uses strong, even shocking terms. But, even he experiences vulnerable moments that can make us sympathize with him.

For instance, at one point, the preacher senses an aura of foreboding. It’s a feeling much like we’re experiencing today, with vitriol, divisiveness and destruction of life creating a helpless and hopeless sensation among many.

Malcolm: There’s been this feeling permeating the air as of late.

At another point, Malcolm remarks that “people are quite literally dying out there on the streets.”

Still, even though the play contains unsettling dialogue, Powers leavens it with humor and an upbeat mood.

On opening night at times, the performers spoke too fast and the dialogue seemed rehearsed. But generally, the acting is commendable and, except for a brief blocking issue, the staging is impressive.

For example, consider a boastful, fast-talking Kieron Anthony as Clay/Ali. At times, he leaps onto one of the two beds, and remains while speaking, as though he’s on top of the world. The actor is nimble and imbues his character with relatable traits. These temper his love of himself, so that Clay/Ali doesn’t seem arrogant.

Similarly, Leon Thomas III endows Sam Cooke with an equally fast-talking, easy-going quality. And can Thomas sing! His honeyed, mostly high-pitched, yet varied voice will win you over. Thomas mostly sounds like the late singer, although he’s missing some of the late great’s raspy quality. Thomas, too, finds a serious, sensitive side to the singer that further endears him to us.

Meanwhile, as Brown, a hulking Esau Pritchett conveys a joyfulness that’s contagious. The actor also invests the former football star with an indomitability and toughness characteristic of his running style.

Some might be surprised to learn where Brown’s from. In the play, he talks about it in a Wilsonian-like passage. Pritchett speaks with such a familiarity, it sounds as though he’s just experienced his character’s earlier days.

A formally-dressed Jason DeLane, in contrast to the casually-dressed other actors, presents Malcolm X as the most formal and business-like, as the playwright intended. While there’s a hint of a preacher’s voice and expression, DeLane never overdoes it. Of course, he speaks forcefully, especially to the young, naïve, Cooke. Still, it’s clear he doesn’t do so out of spite.

Clearly, Powers, DeLane, director Cofield and assistant director Rodriguez stress the positives of the Nation of Islam. Of course, they never vilify the “Nation,” but there’s also a hint of its controversy. The playwright expresses this through the character of guard Kareem (a vigilant, shady, cold and suspicious Jovon Jacobs).

The performers recreate this night on scenic designers’ Christopher and Justin Swader’s realistic, detailed depiction of the motel. There’s a darkish, 1960’s look to the place. Clearly, it’s not the fancy, bright kind of place these men were envisioning celebrating Clay’s historic victory. Nevertheless, they had to obey the laws at the time.

Even so, there’s a line in one of Cooke’s songs that instills hope of better times to come.

We so sorely need that line today.

It’s been a looooong, a long time comin’, but I knooooow a change is gonna come. Oh yes it will…

Miami New Drama continues its production of One Night in Miami through Nov. 18 at the Colony Theatre, 1040 Lincoln Road in Miami Beach. For tickets and showtimes, call (305) 674-1040 or visit miaminewdrama.org.