Berlioz' Damnation of Faust at BSO 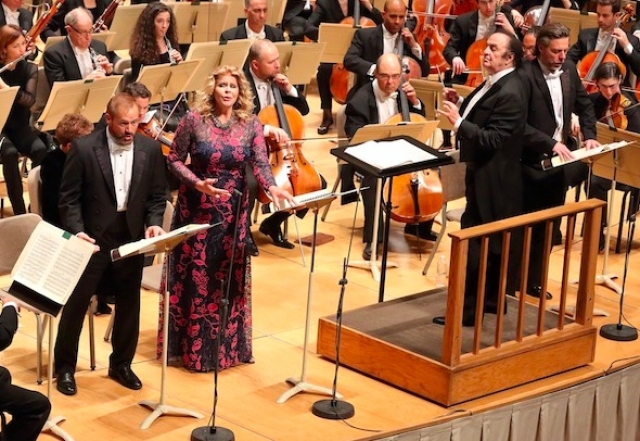 The Damnation of Faust, a dramatic legend by Hector Berlioz, became an audience favorite shortly after its premier. It received a spectacular performance at Symphony Hall in Boston. The Boston Symphony Orchestra, joined by soloists Paul Groves, Susan Graham, John Relyea and David Kravitz captured the characters the composer had carefully etched. In fact, Relyea came subtly to attention as he responded to the grating sound of three trombones and a piccolo, Berlioz’ announcement of Mephistopheles’ arrival on the scene.

Damnation began with Groves as Faust singing of the beauties of nature, a canvas filled with the spring sunrise, breezes, birds and rippling waters. Already we can hear in Groves' familiar lyric voice, a hard edge with suggests his mournful state. This helden quality will serve him well when he rides over a large orchestra and is joined by the voices of over one hundred members of the Tanglewood Festival Chorus. They gave the sense of a religious-themed oratorio in the work’s magic rug journeys across central Europe and to more daring places like Heaven and Hell.

In David Kravitz’s charming rendition of the 'Rat Song', the chorus chimes in with a dozen ‘Ratatouille’ Amens, a witty play on the death of a rat. Berlioz is not all doom and gloom. In fact, the Faust legend, told by one of the composer’s three favorite authors, is rich in the beauties of the natural world and the richness of the love experience.

It is the wish to have the enduring love of a special woman, Marguerite, that leads Faust to Hell. What we will trade away for love is one of the deep ironies of life.

Marguerite is sung by Susan Graham. For her, this is a signature role. Graham has a huge voice, which can respond to the demands of a line, of dynamics, and emotion. We first hear her full-throated as she sings the 'Ballade of the King of Thule', where we imagine Mephistopheles hidden behind the curtains of her boudoir.

Mephistopheles, as portrayed by Relyea, as always is a gravelly, very deep bass, evil incarnate in notes of the lowest register.

All the singers used their hands dramatically. Perhaps inspired by the conductor's motions, soloists would point out at the audience for emphasis, gesture close to the body and also to the heart. It enhanced the drama and added a moving touch to a production that was not staged.

The orchestra was a marvel. Conductor Dutoit has conducted the work often, but it felt as fresh as if it had been composed on the train rides where Berlioz marked his notes on papers supported by his knee.

The delicate quiet often created on the violins was memorably sweet and smoothe. The drums pianissmos, often ending an aria or section, were a highly unusual and ear-catching way to fade out of a scene.

These soft movements set up the surprise of the roaring pandemonium of Faust and Mephistopheles’ ride to hell, and were particularly apt in the coda when Marguerite ascends to heaven, a good place for this dramatic oratorio to end.

Musing on how to attract people unfamiliar with Berlioz and the BSO to come to hear this music which is sure to entrance, we wondered if hiring someone like Godfrey Reggio, or another video artist who is as steeped in music as choreographer Mark Morris, to provide projected illustration might be an answer. It is a dangerous course, and when Gil Shaham tried to illustrate six Bach solos for violin, the results were mixed. Yet the Damnation music suggests not specific scenes of nature, but rather textures from which abstract forms in motion might emerge.

Singing in choruses on stage with the Boston Symphony decades ago, I was struck by the acoustics of Symphony Hall. The sound on stage and in the audience is as splendid today as it has ever been.  It is well worth a visit.