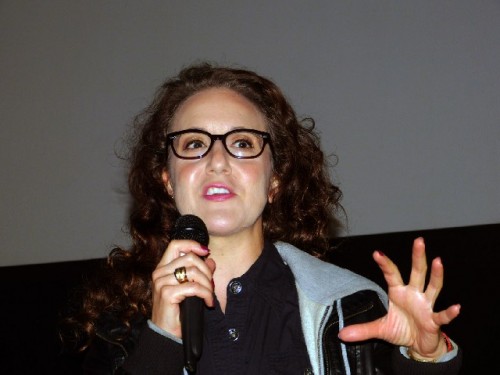 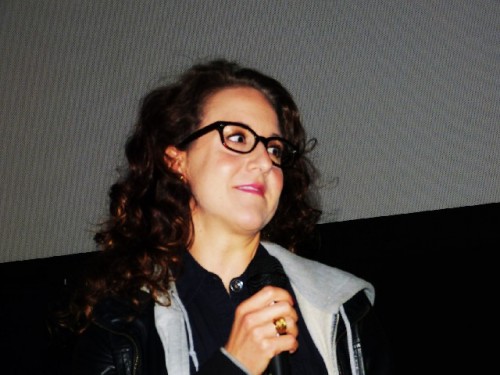 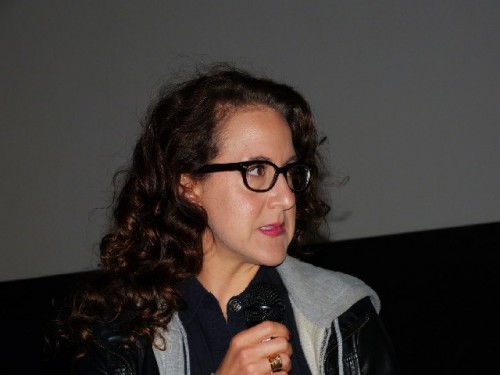 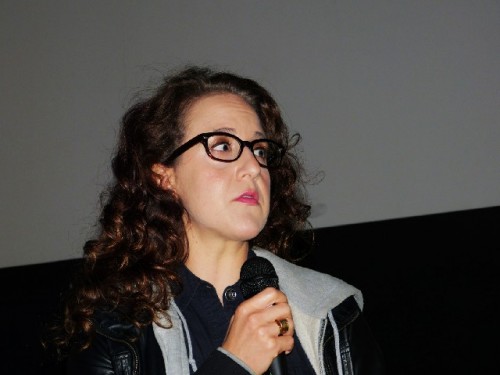 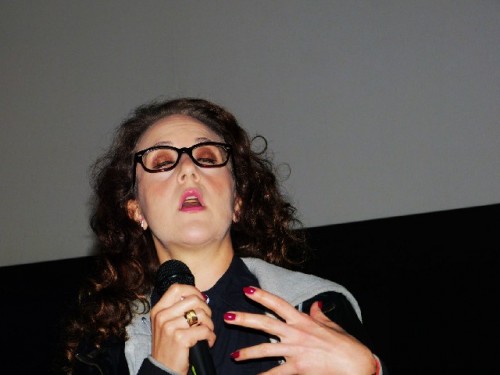 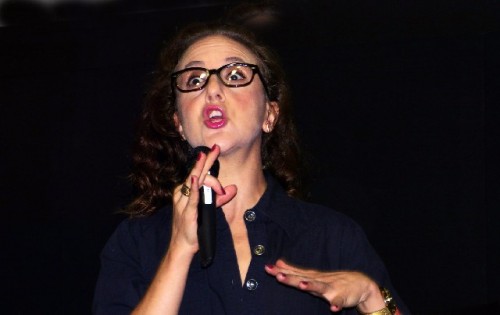 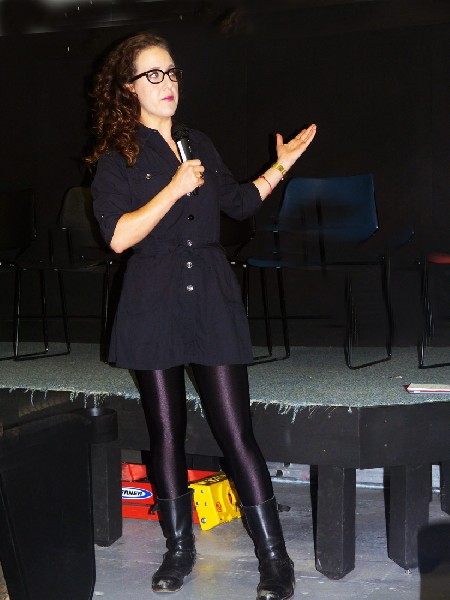 These boots were made for walking. 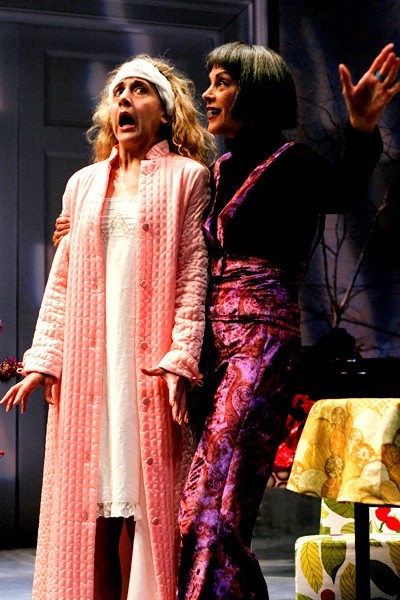 Harris left with Wendie Malick in Blithe Spirit milked the role of the maid. 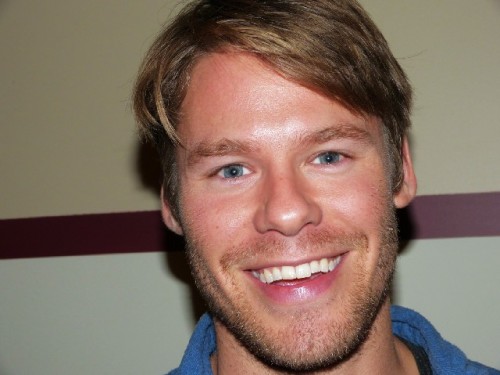 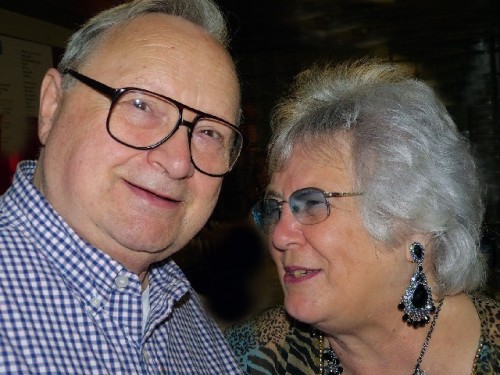 For the brilliant young comic, Jenn Harris, the indy film, Gayby, which was screened at the recent Williamstown Film Festival may be her breakthrough.

The hilarious film that has her character trying to get pregnant with a gay buddy was written and directed by Johnathan Lisecki who has a small but hilarious part. It is doing well on the festival circuit and enjoyed a brief commercial release in New York. The DVD is due in December.

During a post screening discussion with the feisty actress we learned that she spent several seasons with the Williamstown Theatre Festival. It seems that I gave her a rave review for a minor role as a maid in the 2007 production of Noel Coward’s Blithe Spirit.

In August, on a Monday when she and Randy Harrison had a night off from the hit, off Broadway comedy, Silence The Musical, the edgy QWAN group appeared at the Colonial Theatre.

We wanted to know more about QWAN and other projects.

Hanging in on our chin wag was the legendary Countess who provides a home away from home, with complementary nips and tucks in every room, for Harris, Randy Harrison and other young stars passing through the Berkshires. She is an angel for young talent who is celebrated and loved by all.

Charles Giuliano Can we talk about QWAN and the Brooklyn Scene of very young theatre which you are involved with. In Gayby we saw about five seconds of Randy Harrison.

CG QWAN came to the Colonial Theatre in Pittsfield. Can you talk about that?

JH QWAN is a company that me and Matthew Wilkas, Christian Coulson, and Randy Harrison who’s a big Berkshire face, started QWAN. It stands for Quality Without a Name. We do dramatic staged readings of films that we parody. We’ve done (Larry Murray link) Notes and  Swan.

(Based on the film Notes on a Scandal and SWAN!!!, based on the film Black Swan. Both pieces were created and performed by Christian Coulson, Jack Ferver, Jenn Harris, Randy Harrison, Phillip Taratula and Matthew Wilkas. Time Out NY’s Adam Feldman calls NOTES!!! "Uproarious…pure camp gold.")

It’s very high comedy. Just me and five gay guys. That’s my QWAN company. We met in the Lower East Side. When I first came to the city. I graduated BU and went to Williamstown Theatre Festival.

It’s about how do you make art when you’re not like, you know, famous. You’re right out of college and have no money. Which is, what, 99% of the population of artists in New York City. You find people who have the same, in this case, humor. And work ethic. You get together and just put stuff up. You find people who like your stuff.

A lot of what we do is high comedy. Parody. Things like that.

CG Can you talk about how you are redefining theatre. It seems like a very different kind of theatre with a young sensibility.

JH I would say honestly, of course, parody is nothing new. I just finished a run of Silence The Musical. It’s a parody of the film Silence of the Lambs. I do think it’s something we’re seeing a lot more. It’s happening in films and TV. Again, we did not make up parody. But it is something that’s becoming a lot more wide spread. My generation is really taking hold on that. The aspect of sending something up. At the same time parody, in my opinion, is never making fun of something. It’s finding stuff that we love so much that I just have to put my take on it. Which is the films that we do like Silence of the Lambs. I did a show called Our Hit Parade. It had a huge dream sequence with Randy Harrison.

We had this huge cabaret and that whole scene is a lot of what you’re talking about. Which is a very experimental art form, cabaretesque sort of theatre scene which we do in New York City. It’s very definitely not all gay but a very open community. I do find myself very accepted in gay culture. I tend more toward that.

Q What about the gym culture in Gayby?

JH I just grew up with sports and Johnny (Writer/ Director, Johnathan Lisecki) knew that about me. He just wrote it into the script that I did stretches in bed and crazy upside down things. He is also a great fan of comics and goes to the comic book store every Wednesday. He has a huge collection. He really wanted to bring the comic book scene to life and put it on the screen because he knows it very well. It’s a hobby of his and also a very accepting culture. Green Lantern and all these early things have alternative aspects to them. I don’t know comics very well so I can’t speak to it. It’s a hobby for him and he really respects that culture because it’s open to him.

Q There are a lot of crossover issues in Gayby that appeal to more than just the gay community. The fertility issue for instance is something that any couple can relate to.

JH Our world is becoming different. Hopefully we’re more accepting. It’s really expensive and really hard to have a baby. I know couples who have spent thousands of dollars. It’s such a heart break. It’s also a comedy. A couple of critics have gotten hung up on the idea that a gay guy would never have sex with a woman. Uh! It’s a comedy. All these straight comedies are out right now where the dumb guy gets the hot girl. Come on. To me that’s more unreal. That’s my own personal opinion.

CG Can we explore further?

Countess He’s one by my biggest fans. He gave me more press than Randy (Harrison) in an article he wrote.

JH As he should.

CG Were you involved in Found?

CG Did you come to Pittsfield during their residency?

JH No I was doing a show in New York.

CG Can you talk a bit about Louis (Cancelmi) who played the eccentric house painter in Gayby. He was here this summer in two productions for Williamstown Theatre Festival.

CG Then there’s the woman who plays the herbalist in Gayby who is Mandy Patinkin’s estranged wife in Homeland.

CG The casting is interesting.

JH Yeah. That’s Johnny. He just like knows a ton of great actors. Being in the circuit. He did a show with Sarita and Sam Rockwell ironically, a couple of years ago, called Woman in Burka (2008, 20 minutes). Before he did Gayby. Doing the film circuit he met a lot of people, actors, directors, it’s how he found his DP (director of photography). He’s known Louis (Cancelmi) for years. Johnny used to work with a management company. So that’s also how he knows Sarita and Louis. Because he used to work in casting with management. Along with being an actor and now doing more writing producing and directing.

CG The Brooklyn scene seems very intense with so many actors living and working together.

CG Every time we mention Randy it goes viral round the world.

CG She’s already viral. But there’s a difference between viral and virus.

CG Can you talk about your time in Williamstown?

JH When I graduated from school I auditioned and became a part of the Act One Company. I returned the following year as a part of the non equity company. I came up again for non equity and I turned equity in a play up here.

CG Were you in any WFF plays?

JH I was here a couple of years ago and did Blithe Spirit.

CG I remember that.

JH Yeah with Wendie Malick. I played the little maid who ran around. That was me.

CG Didn’t you steal all the scenes?

("…the fabulous Jenn Harris who milked ever moment of the small part of the maid Edith, she was absolutely hilarious as she mugged and camped her way through a minor role." Charles Giuliano, 2007, Berkshire Fine Arts)

That little maid. Yeah, she runs around and gets hypnotized in the end. Yeah. That was me. It was really fun. I love Noel Coward. I love high comedy. Five doors slamming on and off. Falling down. I love banana peel comedy. I do. I really, really do.