Oi Vey Such a Play 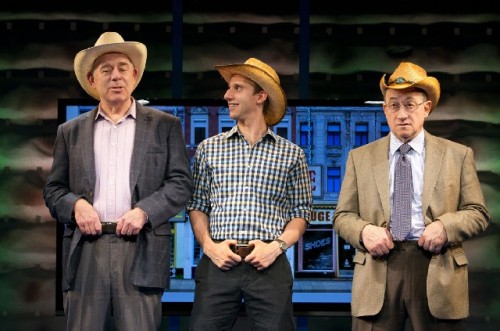 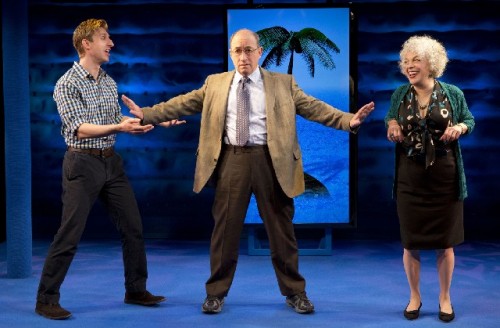 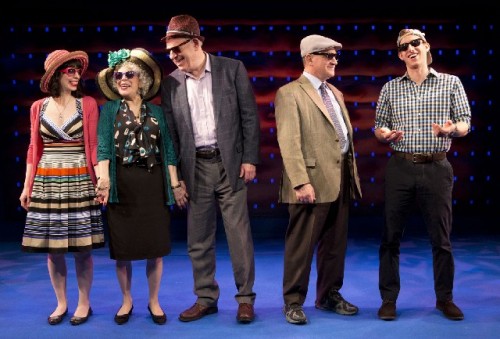 Forget about Next Year in Jerusalem and get off your butt – tokhes if you are Jewish – over to the Westside Theatre to see Old Jews Telling Jokes. Whatever your persuasion, religious or otherwise, unless you are made of stone – and in that case stay home – you will leave the theatre laughing.

You will also be repeating, calling and emailing your favorite Old Jew jokes du jour to family, friends, and enemas for weeks on end, that is, if you can remember them. If you cannot remember zilch, and there must be close to 100 furiously flashing funnies – Old Jews Telling Jokes CDs – a perfect gift for the mishpocheh - are for sale in the lobby.

Not exactly a play, Old Jews is more a revue consisting of hilarious skits – both short and longer — a slew of one liners delivered machine gun style, touchingly true to life monologues warmly delivered by each performer, and a bunch of delicious raunchy jokes, the type usually heard at Friar’s Roast.

Heading the ensemble by sheer will and a rubber face is Emmy, Obie, and Bistro award winning actress Marilyn Sokol, a fine comedic actress with a wide range of body language and facial expressions that would make a monkey jealous. With more than a bit of mugging which the audience loved to death, Sokol adroitly channels the classic Jewish mother, the local yenta, a crying baby, and all women of questionable age.

Playing the long in the tooth— fathers, friends, brothers, sons, doctors, rabbis, and assorted schlemiels and meshuganas, are Broadway veterans, Lenny Wolf, and Todd Susman. Adding youth to cover all of the stages of man – a very wise move on director Marc Bruni’s part – are Bill Army and Audrey Lynn Weston. They get to play those characters younger than springtime.

One wonderful moment, totally unexpected, as well as eye-opening, is Todd Susman’s singing of "Ole Man River" in a thick Yiddish accent. By slowing the song’s delivery to a crawl, he turns what is essentially a Negro spiritual, originally sung by Paul Robeson in Show Boat, into one long Jewish Kvetch. All I can say is who knew?

Adding a humanistic touch to the revue, as well as a temporary rest from all of the laughing, each actor breaks the fourth wall by delivering a fact-filled monologue that reveals the path that brought them to the stage.

We learn that Sokol, though very funny from a very early age – at least her mother thought so – never wanted to be funny. “I wanted to be a business woman.” So she starts her own ad agency. And wouldn’t you know it the first account that she lands, fodder for a great many jokes, is Tampex.

Todd Susman grew up in Brownsville, Texas, not particularly a Jewish haven. His place of worship was directly in front of the television where the Three Stooges, Soupy Sales, and Groucho Marx introduced him to humor. Jewish humor came later with the likes of Woody Allen, Mort Saul, and the records of Shelly Berman and Allan Sherman.

As far as the others! If you want to know more, like how did Audrey Lynn Weston end up in Scarsdale with a Jewish husband and two children after dating a gorgeous blond goy that single handedly carried her refrigerator up three flights of stairs, well, go see Old Jews telling Jokes. You will not be sorry!

Before I leave, I must tell you a joke. In fact, I am going to tell you three Old Jew jokes as I am eager to hear them again myself.

My boyfriend got the phrase, “I love you” tattooed on his penis. I told him, “Stop trying to put words in my mouth.”

An old Jewish man walks into a New York restaurant. He looks up at the Maitre d’ and says “Pardon me, how do you prepare your chicken?” The maitre d’ says “We tell ‘em right up front they ain’t gonna make it.”

A drunk at a party goes up to the hostess and says, “Say, do you have green toilet paper that says, ‘Have a nice day?” The hostess says, “No, of course not.” And the man says, “Uh oh! I think I just wiped my ass with your parrot.”

I hope this sends you running to the Westside Theatre. If you do so, the Westbank Café (407 West 42nd Street, 212- 695- 6909) right around the corner on 42nd street, is the place to go for pre and post drinks and dinner. Don’t be surprised if you run into Joan Rivers. She tries out all her new material at the Laurie Beechman Theatre situated on the lower level in the same building.