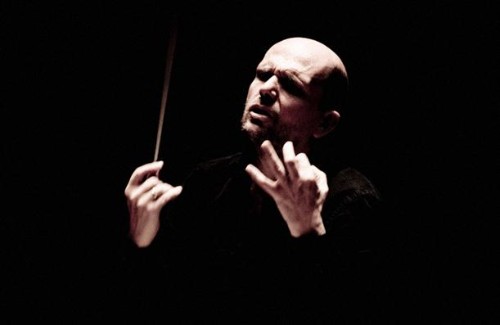 Jaap van Zweden, a favorite conductor of many orchestras. 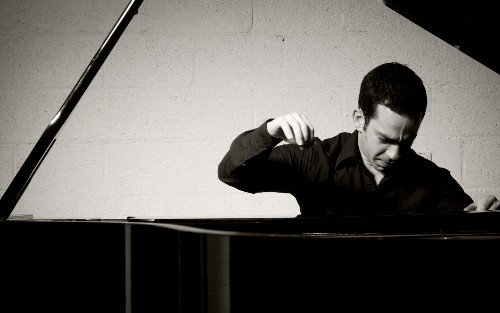 Barnatan used his hands like the conductor he is. 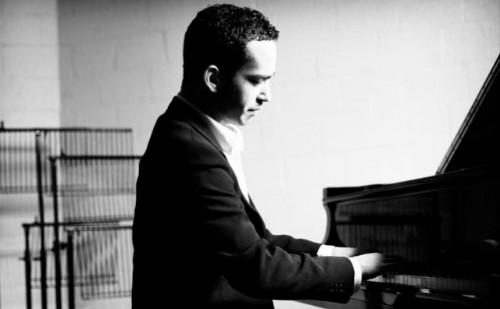 The air was crackling with excitement in David Geffen Hall as Jaap van Zewden strode onto the stage to conduct the New York Philharmonic. Van Zweden is a daring conductor as he reveals classics in often surprising and always thrilling takes.

In the program for this visit from his Dallas Symphony home, the renowned woodwinds and brass of the Philharmonic would be on abundant display. Yet every instrument would have its due under the van Zweden baton.

Van Zweden is a vibrant coil, like Riccardo Muti, whose Chicago Symphony loves playing under van Zweden.  Springing into action, both conductors are always contained and disciplined.

While he never loses sight of the whole, van Zweden works in large arcs giving instrumentalists ample opportunity to express themselves  The orchestra comes alive with the sound of music.

Recently in Chicago’s Symphony Center we sat in the terrace seats on stage and faced Van Zweden for several performances.  For all the fierce force of his conducting, you could see his intimate relationship with instrumentalists, opening up space for them, appreciating their transformative moments.

Sitting in the large auditorium in New York his back was to us.  This added mystery to his brew.  In a commanding performance by the orchestra, who, whether or not they agreed with the conductor's very brisk pace in Beethoven, gave him their all.

The Britten Sinfonia was written in an aborted (but paid) commission for Japan in 1940.  Britten conceived it more as a tribute to his parents who had both recently died.  If it is possible to have mournful joy that is the effect achieved by this requiem.  The brass showed its stuff quickly.  Movements are played without a break.  They formed layer upon layer, each bursting on the other and accumulating power in the percussions.

Next onto the stage came one of the great pianists of our time.  Word had gotten around when he first performed in New York at Washington Irving High school. A few nights later, Inon Barnatan was at Poisson Rouge playing with violinist Janine Jansen. The place was packed. A woman sitting on a stool next to me said she had cancelled all her evening appointments to come and hear Barnatan again after hearing him only a few nights before.  And so it has gone, one triumph after another.  The Chamber Music Society, orchestras throughout the world, and now an artist-in-association position with the Philharmonic.

Barnatan's consummate musicality is also acknowledged.  For the CMS he is the only performing artist who has done programming.  But in the presence of his performance all you can think about is the music.  He is modest as he sits to listen to the orchestra, which performs the perfectly-balanced opening bars of the Mozart alone until the pianist's entrance as the gracious theme returns.  Mozart's written cadenza at the end of the first movement was full of eye-catching power.  It ends in sudden quiet as the full orchestra produces a loud conclusion.

A demanding three octave leap in the adagio movement, a sad dance, suggests great singers.  Even when he is subservient to the clarinet and flute in free canon, Barnatan glistens.  He participates in dialogues between the woodwinds and strings.

Mozart’s A Major Piano Concerto is, in addition to its great beauty, a drama of orchestra and soloist.  Van Zweden and Barnatan were matched protagonists.  Both are commanding, but yield to the music.  Barnatan notably trusts the piano, always respecting it, but deriving pleasure and seemingly free of fear or a need for insistent pyrotechnic demonstrations.

Van Zweden encouraged the strings to fill out harmonic progressions.  He finds another kind of dialogue between legato winds and staccato strings.  Everywhere the music talks: loud and quiet, soft and forceful, staccato and smooth.

The evening ending with bang-up Beethoven.  More seasoned members of the Philharmonic orchestra were particularly passionate in their playing.

The audience stomped, cheered and whistled.  This evening’s performance deserved the accolades.