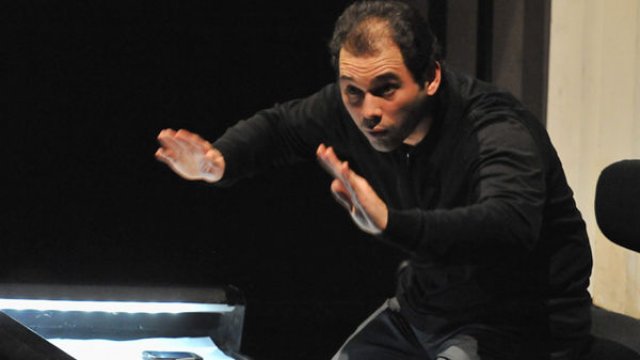 Prior to this week, the  Russian conductor Tughan Sokhiev was an unknown quantity at the New York Philharmonic. Currently music director of the Bolshoi Theater and the Orchestre Nationale du Capitole de Toulouse, he made his debut on the podium at David Geffen Hall, armed with a triptych of works from his native land by Borodin, Prokofiev and Tchaikovsky.

Friday’s matinee concert started with Alexander Borodin’s In the Steppes of Central Asia, an expressive tone poem that brings Russian folk songs into juxtaposition with the romantic melodies that Borodin is known for. A member of the Five or “Mighty Handful” of Muscovite composers, Borodin was a part-time musician who nonetheless produced a small quantity of  effective finished and unfinished workers. Steppes has a searching, singing quality, building from a sweet first statement in the violins to a muscular central crescendo, powered by surging horns and sonorous trombones.

Next the orchestra was joined by frequent collaborator Gil Shazam for Serge Prokofiev’s Violin Concerto No. 1. What was remarkable about Shaham’s performance was how his dry, somewhat ascetic tone underlined the wit and parody woven into this virtuoso solo part. His violin sang, slithered and side-winded through difficult, narrow passages, chasing the orchestral accompaniment before laughingly running away.

That unconventional sonority was even more apparent in the middle movement, a parody of metronomic writing which Shaham used as a springboard to unleash more serpentine figurations. The finale’s opening pages mock the drama of other concertos, but the demands placed upon the soloist are no less stringent, This is the early Prokofiev burning with the white-hot fire of inspiration, touched with wry humor and the occasional juddering slide down the fingerboard.

It was followed by an enchanting encore: Shaham and concertmaster Frank Huang playing one of Jean-Marie Leclair’s duets for two violins. This bit of musical legerdemain and comradely good fellowship was the perfect antidote to the sophisticated sarcasm of the Prokofiev work, and a reminder that the man at the helm of the Philharmonic first violins is a virtuoso in his own right. (Mr. Huang will be the soloist in next week's program featuring the lone Violin Concerto by Samuel Barber.)

Tchaikovsky’s Symphony No. Four is a victim of its own success. It is performed often, too often, and remembered chiefly as an outburst of vulgar brass showmanship and a conductor’s aerobic heroics. Both of these are well-loved by audiences, but they threaten to sink the work under its own considerable weight. However, Sokhiev delivered an analytic performance that employed the orchestra’s strengths and familiarity with the score but successfully underlined the interconnected nature of these four movements and the totality of the composer's achievement.

It sounds very zen to say that the most important thing this conductor did was nothing, but there it is. He put negative space between the delicately plucked third movement and the tempestuous finale, adding a long pause for breath where most conductors go all out and play attacca. This little pause was a very good idea indeed, giving players and audience a chance to breathe and process before the final assault started. The result was a triumph, as the the happy closing music  won the day over the fatalistic fanfare of the work’s beginning. It was a complete and thrilling success, and a strong debut for this talented conductor. (Reprinted by permission from Superconductor.)