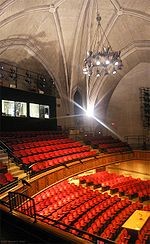 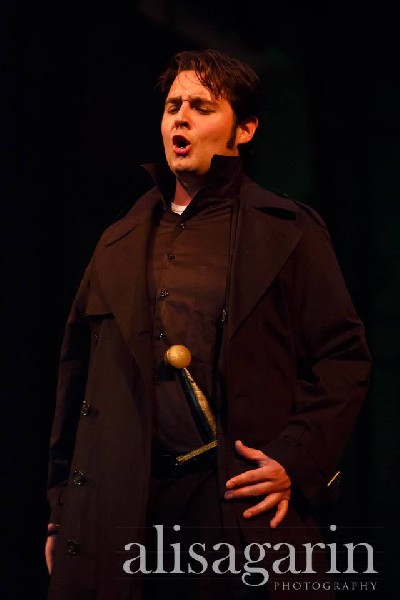 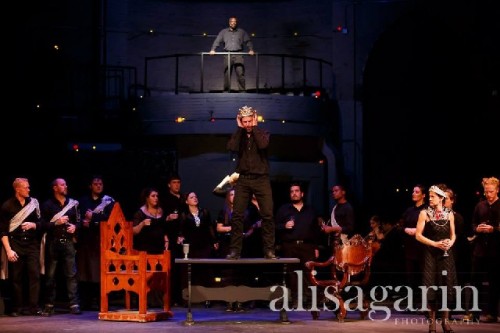 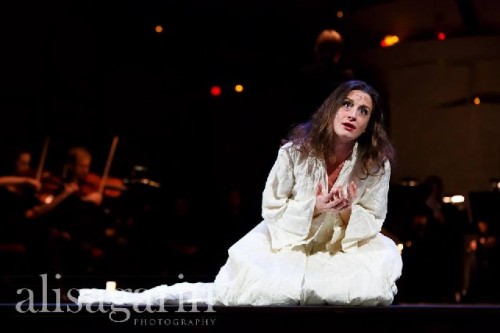 Lady Macbeth, Amelia D'Arcy: Is this a spot of blood? 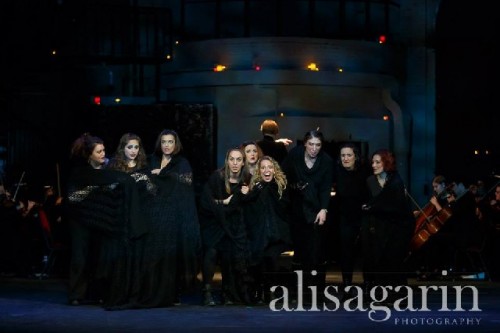 Congratulations are in order to the newest upstart performance company in Pittsburgh, Resonance Works.  Under the expert guidance of American Prize winning conductor, Maria Sensi Sellner, a thrilling maiden production of Verdi’s Macbeth came to life at the Charity Randall Theater this past weekend.

Not every future production will be performed here, but as a coming out venue the space could not be beaten.  Designed as a theater but masquerading as a church, the soaring cathedral architecture lent a grandeur to the piece, imparting a sense of awe that is quite appropriate for the dark and twisted plot of human aspirations and weaknesses.

Pleasantly, the air was devoid of the lingering chill dampness one might expect from most Gothic buildings, and the cushioned velvet seats perfectly offset the ping of the music against the fluted walls and vaulted ceiling making for a crisp, clear sound.

Blood-red curtains opened onto a twenty four piece orchestra, ensconced in back by the seated cast whose faces glowed eerily as if witnesses to the tragedy about to unfold.  There was no set to speak of, the only adornment being red and white candles that flickered on the bare backdrop of the building.  Kudos to director David Gram for using his limited space well.

Every level was utilized, from the raised balcony behind the orchestra which served as King Duncan’s death chamber, to the floor in front of the proscenium where the soldiers lay in wait before leaping on-stage to attack the innocent Banquo.

The singers appeared mainly in their own black clothing, dressing it up with various accouterments to indicate a change of scene.  An overall timeless abstract effect was achieved and while obviously a budget-sensitive choice, it was, for the most part, not distracting and added to the overall bare-bones gritty-ness of the piece.   A smattering of symbolic props also complemented Gram’s post-apocalyptic take with an interesting dark levity.

One such instance was a fleshy thighbone (presumably dinner) that was one of the many weapons used to club Banquo to death.  The other was a simple modern day teddy bear that MacDuff returns to the ghost of one of his children scattered dead at his feet.  These are decisions that may not please all operatic theater goers, but the choices were clear, and that is to be commended.

After the full-sounded satisfying overture, the witches commanded the first scene, infiltrating the stage via narrow pathways carved out of the orchestra.  The nine “weird women” split into groups of three, surrounding Macbeth and prophesying his future as would a Greek chorus.  They carried strips of black gauze used effectively to make them seem more otherworldly and shrouded in darkness.

In Act III the same gauze becomes the confines of a large cauldron center stage around which the hexen danced.  The voices were even and strong, the music solid, and the staging haunting.  A particularly fun moment came near the end of Act III when the witches suddenly turned all attention to the podium to greet the arrival of a new spirit.  The multi-talented Sellner surprisingly took the spotlight while conducting to sing the brief Herald lines, appearing and disappearing with great dramatic flair.

Among the coven of notable mention was Brooke Larimer whose credited role of Lady-in-waiting by default also made her lead among her wicked brethren - a vibrant mezzo Hecate in full force.  The dual casting stirred the plot to greater intensity by adding a demonic double agent perspective to the loyal servant.

Galen Bower turned in a sensitive yet powerful performance of the title role, skillfully tapering his large baritone voice to blend with his counterparts and capture the finer nuances of each scene.  A consummate actor, he was entirely believable as the uncertain villain; part coward, part enraptured lover, part bloodthirsty warrior.

Jonathan Stuckey did well as the ill-fated Banquo, his smooth deep voice imparting both foreboding uncertainty and then courage as he defends his son, the future king, against Macbeth’s assassins.  Later when he reappears as an apparition during a royal feast, Stuckey, now silent, deftly shifts his character to that of comic ghoul, completely in charge of manipulating the mind of his murderer.

The light lyric lines of acclaimed tenor, Joseph Gaines, more than did the bewildered Malcolm justice and Chris Lucier embodied the bereft hero, MacDuff to perfection. Is it possible for an aria to be tender, hollow and impassioned all at once?  With his Italianate tenor, Lucier combined the emotions as perfectly as they exist in the human soul after suffering a great loss.  We don’t see much of MacDuff until Act IV, and, at least with Lucier at the helm, one wishes that Verdi had thrown a bit more material his way.

This brings us to the leading lady, played with great vivacity and zest by Pittsburgh native Amelia D’Arcy.  The soprano certainly has a voice to be envied with soaring pianissimo hi-wire lines that could effortlessly nosedive into chesty declarations full of emotion.  Her evocative note-perfect rendition of Lady Macbeth was marred slightly only by an over-reliance on the monitors (remember, the orchestra is in back of the singers).

The score is incredibly challenging even with such a talented conductor as Sellner, and with this short a rehearsal period, some crutches can surely be forgiven.  Thankfully, the fallout was not that D’Arcy seemed disconnected or out of character, but her turning out did imbue her with a preemptive air of insanity.

I have always thought it important that Lady MacBeth appear as a cold-hearted, power hungry climber, completely in command of her faculties in the beginning.  This is what makes the tale of MacBeth so chilling - the thought that we all can make incredibly cruel, misguided but rational choices in pursuit of our goals.

Appearing off-kilter before her time would undermine the impact of the sleepwalking scene where guilt actually does drive Lady MacBeth to madness. However, this was not the case with D’Arcy. In a compelling twist, Lady MacBeth’s  “Una macchia è qui tuttora!” stood out not just for her impeccable singing but because it turned out to be the most tragically rational and real piece of her character.  It was not that she was going insane, but more that she was finally coming to her senses.  This piece alone was worth the price of admission.

Thank you for a lovely evening of great music and theater, Resonance musicians.  Here is wishing you many more fruitful seasons to come.