One Flea Spare by Naomi Wallace 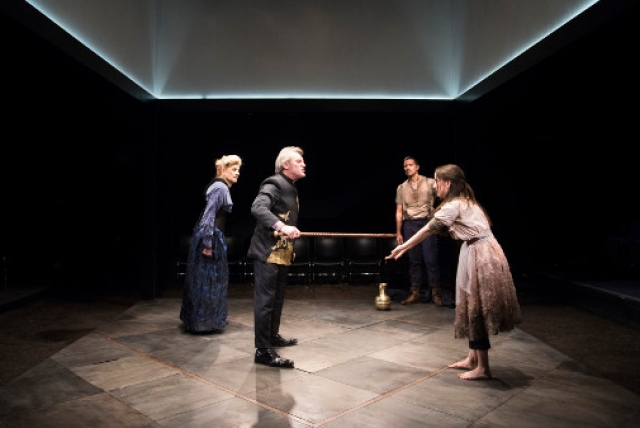 You might not want to wear your best shoes to Playhouse Creatures Theatre Company's riveting Off-Broadway production of Naomi Wallace's play "One Flea Spare."

Your footwear will get muddied before the afternoon or evening is over, due to a smart directorial choice by Caitlin McLeod, who is helming a 20th year anniversary Off-Broadway production on-stage through Nov. 13 at the Sheen Center on Bleecker Street.

To get to your seat, you must walk through a mud pit, which not only extends into the audience seating area but is an extension of the stage.

One could say the purpose of the mud pit is to purposely make part of ourselves dirty, in order that we may look inward into the less-clean, rougher aspects of ourselves. "One Flea Spare," which is set in 1600s London, concerns a couple forced to live with two strangers during the height of the plague.

In the play, the plague literally refers to the disease that killed off countless individuals. But for the purposes of the play, the term also metaphorically suggests the seemingly never-ending "plague" of human cruelty; how we belittle those whom we consider below us, socially or economically, remain locked in a state of intolerance and even torture each other, physically and/or emotionally. In short, we're all, to one degree or another, "mudslingers."

The audience sits in a "theater-in-the-round" configuration within the Sheen Center's extremely intimate black box theater. The action seems to swirl around us and further implicate us in perpetuating the "plague" of human indecency.

We have mud on our person literally and figuratively once we leave the theater.

Leaving the home in which the multi-award winning play is set isn't an option for upper class couple William and Darcy Snelgrave, who've chosen not to flee their home before the plague invades their city. A mysterious man named Bunce, calling himself a sailor and an even more enigmatic 12-year-old girl named Morse have, through creative means, found their way into the home.

The title of the play, which feels like a cross between Tennessee Williams and Harold Pinter's work, comes from words in a poem by English poet John Donne (1573-1631). Another way to look at the title is that the couple decided not to flee their home, but are stuck with the man and girl. It wouldn't be a stretch to say the husband and wife consider the strangers little more than fleas.

Just as all four are stuck inside (the doors are bolted from the outside), the characters are locked in their bitter, wary, inhospitable state of mind. If they're not infected with the actual plague ravaging 17th-Century London, they're inflicted with the "plague" of indecency, lack of feeling for the less fortunate and the drive to hurt.  Fear, paranoia, hostility, mistrust and immorality exist between the four.

The plot details are complicated and at times murky, potentially leaving some audience members feeling lost or confused. The lines that end the play are particularly baffling. Playwright Naomi Wallace's cerebral, muscular language can make the story hard to follow at times. But the words have a lyrical quality that one can enjoy even while being confused. The language is a kind of music, albeit harsh, to one's ears.

Under director McCleod's astute direction, the characters rise, repose and kneel, creating variety in their movement, so that the proceedings never feel static for too long. McLeod has created some striking stage pictures to keep us riveted to the stage.

The plague (the literal one, not the aforementioned "plague" or cancer" of human hostility) doesn't afflict us in 2016. But we can identify with the play -- not so much because the characters are likable, but because we understand the term "fear" in our unpredictable, scary world.

As Morse, the 12-year-old, Remy Zaken reverts practically into a feral state, with her dirt-streaked face. At one point, she crawls toward the others like a sneaky cat. Zaken's sometimes subtle, playful demeanor carries dark undertones.

As skillfully played by Zaken, who's not a child but a college graduate with several Broadway credits, Morse comes across as a Dickensian character whose time spent on the streets has toughened her, turning her into a mocking, sarcastic, precocious urchin (think Gavroche in "Les Miserables.")

Joseph W. Rodriguez invests the sailor, Bunce, with a common demeanor. He excels in a natural, multi-faceted performance that calls for him to act, at appropriate times, submissive and on the other extreme, deadly aggressive.

Concetta Tomei, by contrast, has a refined, glamorous and peace-keep aura as the lady of the house. When her character panics, Tomei significantly lowers her voice, speaking in desperate, hoarse tones.

Gordon Joseph Weiss never fails to rule the stage as a wide-eyed, wary man of the house. He brandishes a stick and isn't afraid to slam it down to remind everyone of his authority. Weiss' Mr. Snelgrave is convincingly playful and affable at appropriate times. But once the strangers or even his wife do something he doesn't like, he reverts to a Scrooge-like nastiness and bitterness.

The guard Kabe is played by Donte Bonner as a clownish, laid-back person. The character's role is obviously to ensure that those who didn't escape their home stay put.  But he also relishes his role as the keeper of the keys (remember, the doors are locked from the outside) and Bonner has fun with this aspect of the character.

Aaron Porter's lighting is at times harsh, suggesting the serious situation into which these characters are locked into. The lights darken and blink during other moments to create a foreboding effect and are non-realistic during scenes that call for an otherworldly aura.

"One Flea Spare" won't appeal to all be every theatergoers, particularly those looking for escapist, light-hearted, accessible fare. But it's hard not to be impressed with the high-quality acting. These performers invest their characters with a sense of urgency and intensity without overacting.

The performers, and the playwright's lyrical language, are worth the price of admission.