At the Wake of a Dead Drag Queen 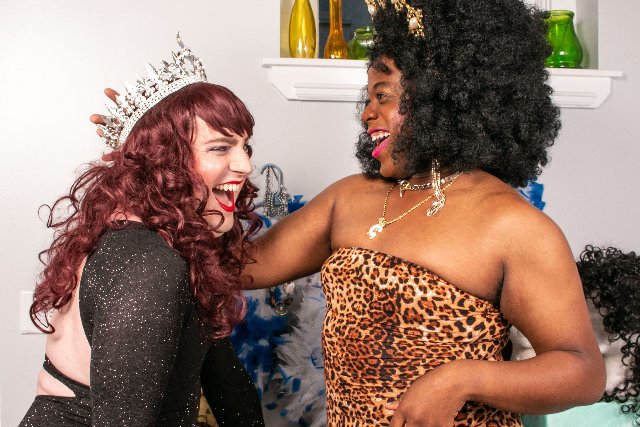 In seeing the title of this play, many a theatergoer might ask, “What’s in it for me?  It sounds like it could be depressing or preachy, and it’s not really in my area of interest.”  Regrettably, the title not only misleads, but it could discourage potential audience.  As declared by Courtney, the main character – “If you’re expecting something depressing, you’re in the wrong place.  Go see ‘Philadelphia.’”  Only by seeing the play’s promotional literature will you learn that it is a multidimensional dramedy.  Only by seeing the play itself will you learn that the wake is only figurative.  The narrative is a flashback of the central character’s last months with a focus on relationship.  You will also learn that other than the quirkiness associated with men portraying flamboyant women, that they share the same joys and sorrows as the rest of us do.

Appropriately, Theatre Rhinoceros presents “At the Wake of a Dead Drag Queen” in its new, intimate home in The Castro.  Their choice of play to christen the new venue fits like a glove.  Thematically, the suitability is clear for the longest running LGBTQ theater company in the universe.  And in a setting where the audience can reach out and touch the performers, a small two hander where the actors’ every small gesture can be seen works well.

“At the Wake of a Dead Drag Queen” transcends the boundaries of its genre and can be broadly appreciated.  It doesn’t hurt that the play is an affective and effective character study of two people grappling with an inordinate number of life’s challenges.  And by the way, it’s a very thoughtful play with generous doses of humor and pathos; well produced and directed; and acted with consummate charm and authenticity.

Anthony, AKA Courtney, is an experienced black drag performer in small city Georgia.  Hunter, AKA Vickie, is a white drag newcomer who Courtney takes under her wing and more.  It is the beginning of the AIDS epidemic, and both suffer from its threat – a fitting corollary to the current pandemic.  Courtney is played by Devin Cunningham with great panache and gusto – flashing a smile and false eyelashes with the confidence of one who is a sexual magnet.  But while the character can seem blithe and flighty, she has a hard edge.  Having lived under the dark clouds of discrimination and fear for her 23 years, she is cynical, self-indulgent, and sometimes thoughtless.

Credit playwright Terry Guest for investing well in the second character to provide great balance.  Mario Mazzetti plays the more sensitive Vickie with complete conviction, and she can be very engaging and empathetic.  Though she has suffered many of the afflictions that Courtney has, she still retains some optimism and aspiration.  Is it perhaps because she is white, or is it because she is not at death’s door?

The girls dress with the full signature accoutrements associated with drag queens – over-the-top makeup, flashy wigs, garish wardrobes.   They also delight with classic drag queen entertainment.  There’s plenty of lip syncing, with the most memorable being a duet to Shirley Brown’s “Woman to Woman” and Vickie’s rendition of Mozart’s “Queen of the Night” (how appropriate!) aria from “The Magic Flute.”

In this production, talented Director Tanika Baptiste multitasked to also cover costume design and choreography.  One of the pleasant little surprises is the choreography and execution of the dance numbers, which includes a nice dance duet and a sassy solo by Vickie of Shania Twain’s “Man!  I Feel Like a Woman!”

Between the diverting entertainments, the drama of the relationship ebbs and flows from sweet nothins’ to bickering and avoidance.  As their personalities are exposed, so are broader issues that the playwright addresses.  These are the contrasts between black and white, rich and poor, gay and straight in a state that simultaneously lurches toward inclusive harmony and retreats to all manner of divisiveness.  And in one of the sad and more telling truths, Vickie observes that poor whites and poor blacks have so much in common that they could fight together, but a chasm between them is created by the likes of the NRA and Big Pharma.  Unfortunately, this lesson is lost on the masses, who if united, could institute real change for the better.

“At the Wake of a Dead Drag Queen” is written by Terry Guest, produced by Theatre Rhinoceros, and plays at Spark Arts, 4229 18th Street, San Francisco, CA through November 14, 2021.