The Theatrical Version of the Board Game and Movie 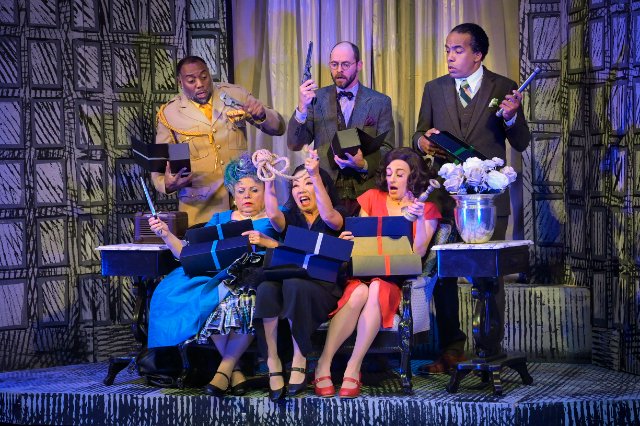 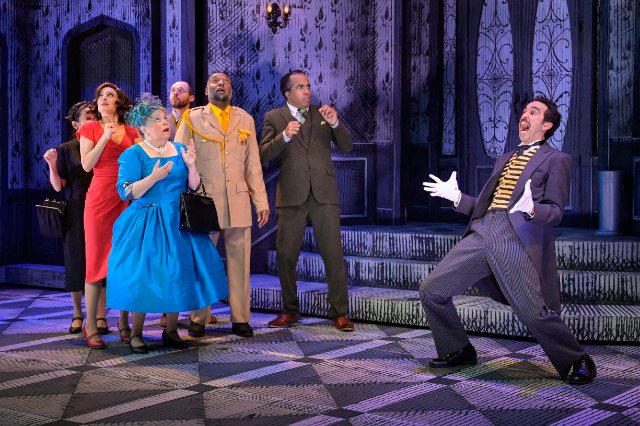 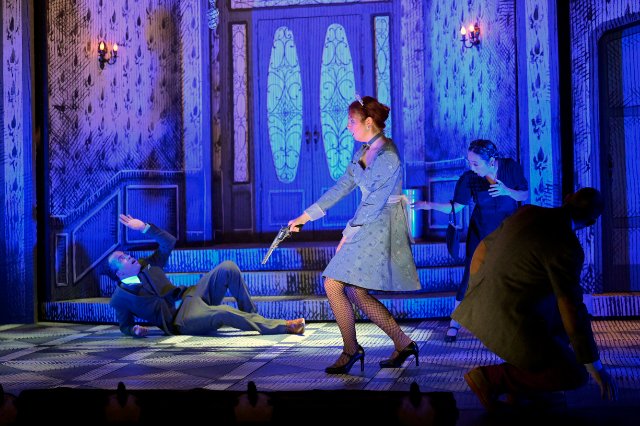 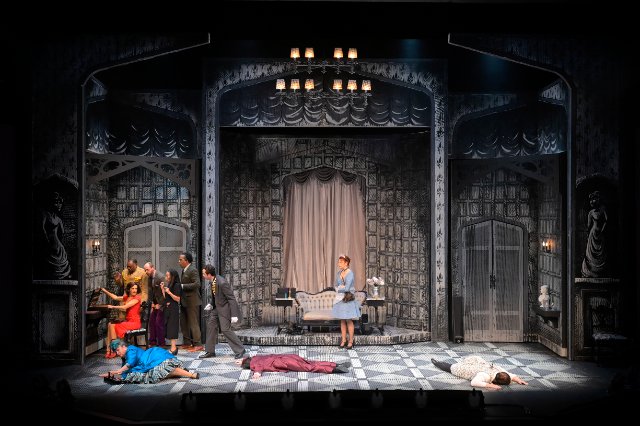 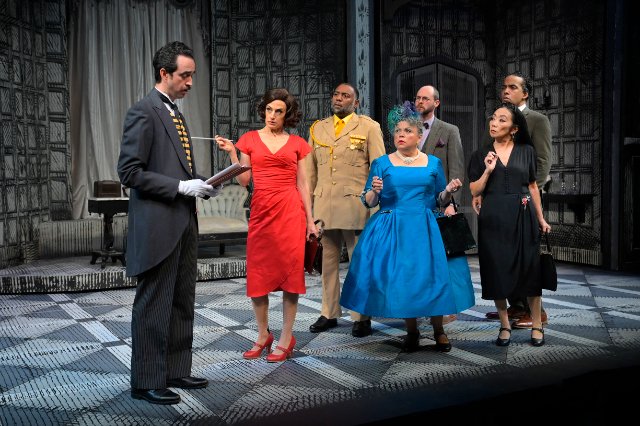 Murder!  Mystery!  Mayhem! are the order of the day (er – night) as Center Rep takes on the classic trapped-in-a-scary-mansion who-dunnit?  Did the butler do it?  In a play that relies on style rather than gravitas, Director Nancy Carlin pulls all the right strings to make for a fluffy and entertaining ninety minutes.

The premise of “Clue” consists of the genre standard.  Several characters unknown to one another are invited to a gathering at Boddy Mansion by the mysterious Mr. Boddy.  Guests are identified by color-coded monikers rather than their real names to protect their identities. One common connection is that they are all being blackmailed, but only Miss Scarlett, who runs an escort service, will admit it.  Guests are locked in, and murders occur.   The challenge is to determine who is (are) responsible for them.

The success of the narrative depends first on the cleverness of the mystery.  To enliven matters, there is not one central thread, but multiple murders with various presumed motives, so the plot is suitably complicated with many twists and turns.  Evidence will suggest plausible explanations for some of the killings, but they may be red herrings.  To add socio-political heft to the proceedings, the mystery takes place in the Washington, D.C. area, with the House Un-American Activities Committee investigations as a backdrop, but this aspect is not properly developed in the story.

The other requisite is humor, and it flourishes.  The overall tone is farcical, with considerable physical comedy ranging from characters floundering about to corpses being propped up to seem overindulged rather than dead.  Of course, the invisible host wouldn’t be styled as Boddy if there weren’t bountiful opportunities for plays on words with the name.  There are plenty, as bodies keep falling.  Each character has odd quirks.  Brady Morales-Woolery deftly portrays Boddy’s butler, Wadsworth, the central figure and orchestrator of activities or herder of cats.  A variant of John Cleese in “Fawlty Towers,” he’s in control –  except when he’s not.

Perhaps the funniest character is Colonel Mustard, played in amusing dimwitted fashion by Dorian Lockett.  The Colonel constantly interjects eye-rolling non sequiturs and admits that when he doesn’t get things that he is “not very good at nuance.”  He and Wadsworth share a set piece reminiscent of Abbott and Costello’s “Who’s on first,” built around the Colonel’s wanting to know if there’s another body (Boddy?) in the house and getting more confused with each of Wadsworth’s ambiguous responses.

All principal characters are well-drawn, each with amusing schtick that provides the little filler laughs.  Sarah Mitchell as Miss Scarlett shakes her booty; Wilma Bonet as Mrs. Peacock shrieks; and Keiko Shimosato Carreiro sulks and glowers.  Overall, the cast is up to the task with exaggerated gestures and good timing.  Most of the gags prompt laughter in the right places.

Repetition is used effectively to bring laughs to several situations.  The assembled often move en masse from one room to another (but ending up in the same space on the stage), so they enact galumphing slow-motion movement on a dimmed stage to arrive at their destination.  Otherwise, various characters, one-at-a-time, provide conflicting scenarios of what has transpired.  After each tale, characters rewind, lurching backward to return to their previous positions.  Even though the audience comes to expect the device, it works successfully several times.  Finally, because matters have become so convoluted, Wadsworth gives a full review of everything that has come before, and as unlikely as it would seem, the recitation plays for laughs.

This type of comedy also relies heavily on staging to enhance effects.  Kelly James Tighe’s single-set stage design transports the audience to different venues within the house by the use of three large set elements that revolve, exposing different rooms, albeit in the same graytone colors and pattern.  Cliff Caruthers’s soundtrack is almost constantly present and includes an abundance of atmospherics like ominous music and crackling thunder to create an eerie sensation.  Similarly, Jennifer Fok’s lighting creates the light and dark to amplify the sense of foreboding.

“Clue” is written by Sandy Rustin; from the screenplay “Clue” by Jonathan Lynn; based on the Hasbro board game of the same name; is produced by Center Repertory Company; and plays at Lesher Center for the Arts, 1601 Civic Drive, Walnut Creek, CA through November 20, 2022.