Bluebeard's Castle at the BSO 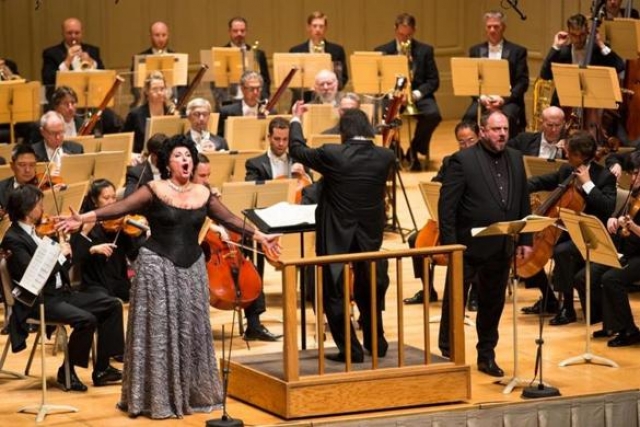 I’d never thought of “Bluebeard’s Castle” as a Halloween opera, a limited genre with Verdi’s “Un Ballo in Maschera” occupying the place of honor, but after Saturday night’s performance of this Hungarian outlier at Symphony Hall, it makes perfect sense. Note to opera company directors everywhere: schedule the symbolist work for a late October date as soon as your schedule opens up. With its creepy title character, his closet full of wives swathed in jewels, and his gloomy castle that drips blood, sweat and tears – a haunted house! - it could become a Halloween classic. Some of the younger members of the BSO audience were in on the concept: I noted a prince of church squiring a sexually ambiguous fashionista, and a nurse and her bloody patient sat next to me in the orchestra. At intermission I saw an otherwise conventionally dressed young man who had dyed his beard blue, one hopes with an easily washed out vegetable dye.

“Bluebeard” (composed in 1911, first produced in 1918) is Bartók’s only opera, and, other than the fact that it was indifferently received by the public of his time, after a long delay in getting it produced at all, you can understand why he never gave the genre a try again. With only two characters who sing at each other, mostly about the castle and its mysteries, it is not dramatic – everything happens in their heads. As a form, it is more of a secular oratorio, which is why it is mostly done, on the rare occasions when it is, in concert form. Yet the fact that it contains such alluring descriptions of what lay behind the seven mysterious doors Judith, Bluebeard’s latest wife, opens one by one, it is frustrating that we can’t see them with our eyes but must rely on our imaginations. Some in the audience will create full pictures in their minds of the armory filled with weapons dripping with blood, while others will envision every setting of the blood-spotted diamonds, rubies and pearls that fill the treasury, but others will not. With contemporary video projection liberating set-designers to create the most fantastical scenic images, this is an opera that begs to be visualized with images hitherto unrealizable on stage. (We saw how well that technology can work recently in the “Ouroboros Trilogy” at the Cutler Majestic.) And wouldn’t we love to see how Bluebeard dresses in his own home with seduction on his mind? I see Johnny Depp playing the part in the movie, louche, decadent, cheesy.

Bartók must have realized that his future success lay in instrumental music rather than opera and he went on to create some of the most dynamic chamber and orchestral works of the early 20th century, rhythmically and coloristically informed by the folk music he had seriously studied.

But “Bluebeard” remains, a curiosity, revived from time to time in the concert hall – the BSO did it as recently as 2011 – because of its lush, compelling and still exotic-sounding music. The BSO made sounds unlike any I have ever heard before, the eerie sound of a sigh made with strings, celesta, wind and percussion not one I should soon forget.

The story is rooted in folklore. Charles Perrault, the 17th century French writer who gave us “Little Red Riding Hood,” ‘Sleeping Beauty” and “Cinderella,” wrote it down in his moralistic collection of fairy tales. (His moral is basically that curiosity killed the cat.) It is a story that appeals to composers of symbolist/allegorical bent – Paul Dukas, he of “Sorcerer’s Apprentice” fame, wrote an opera on another version of the legend a dozen years before Bartók.

It is, I have to admit, a story that does not really engage my imagination, and I come up blank trying to create meaning out of the seven worlds behind the seven doors Judith opens on her first night in the castle. The first room is a torture chamber, the next, an armory, the next, the treasury filled with jewels and gold; there is a lush garden behind the fourth door, and Bluebeard’s domain in all its glory is revealed behind the fifth. The sixth door opens to a lake of tears and the seventh door opens to a room where Bluebeard’s previous three wives live with each other and their jewels. Others have labored to explain what it means, and if you’re interested you can refer to the BSO’s program note, as always a helpful guide to the concert goer. I won’t go into it here.

The mysterious rooms and their vastly different contents do give Bartók an opportunity, however, to create impressionistic sound pictures and to define Judith and her relationship with the enigmatic Duke in different circumstances.

Psychologically the Duke is easy to figure out. He’s a man who collects women, along with things – amazing things! rooms full of things! I can hear someone running for President say - improving his take with each new acquisition. When Judith first sees his former wives, she exclaims that they are more beautiful than she, and Bluebeard assures her that she is the most beautiful of all. (Did he say that to all the girls?)

But Judith is more difficult to figure out. Why is she there? How did she and Bluebeard meet? Is she a masochist, getting a thrill flirting with danger? Why doesn’t she leave when she sees the secrets of the seven rooms? It doesn’t seem to be for love, and it certainly isn’t for sex. Is it for the money? She asks, when she sees the treasury, “How rich are you Bluebeard?” In any case, neither is a character you identify with, the key to what seems successful drama in today’s film and television.

After a slow and sluggish start, the drama, and the music, pick up toward the end. (It is only an hour long, so you don’t have to wait long.) And Bartók’s allegorical intention’s come closer to being realized. When Judith opens the fifth door, to Bluebeard’s Kingdom, the orchestra creates a blast of ravishing sound, with a full battery of shimmering strings. Four extra trombones and trumpets standing at the rear of the stage herald the magnificence, while the majestic BSO organ, so seldom used, resonates through the hall, creating vibrations you can feel through the soles of your feet. It’s the WOW moment.

Only at the seventh, final door, which opens to the chamber where his former wives dwell, do the two show any human emotion. Bluebeard asks for a kiss, and Judith responds, “Bluebeard, love me!” As he opens the door, the orchestra pounds out the sound of dread. And as the wives come forth, dripping jewels, Bluebeard tells Judith that he met his first wife at dawn and that she is all dawns, that he met his second wife at noon and that she is all noons and that he met his third wife at eventide, and that she is all evenings. Judith, he tells her, he met at night and she will be all nights. She accepts, enters the room, the door shuts and the orchestra takes over at full volume in rich chromaticism, finally dying away on the lonely figure of Bluebeard who is once more alone.

The success of the opera depends on the two vocal soloists and the orchestra, which is really the protagonist of the work, not the scenario. As Judith Ildikó Komlósi was as magnificent as the role demands. Regal in bearing and with a stentorian voice that cut through the orchestra, she reminded me of a Hungarian soprano of an earlier era, Eva Marton. Komlósi commanded the stage, although the authority she projected makes one wonder why her character would wish to submit to a saturnine Duke and resign herself to life in a gloomy castle. But that’s the way Bartók wrote the role, not Komlósi’s problem.

Despite the simmering menace inherent in his character, Bluebeard comes across as something of a cypher, inarticulate, solipsistic, sinister. German baritone Matthias Goerne did nothing to give the character greater nuance. He sang with a steady, centered voice, although his voice faded away in the lower passages. With his performance you wonder even more why Judith would want to spend the rest of her life in his castle, all the jewels of his kingdom at her command, or not.

The work opened with a brief spoken text. Local theater person, George Meszoly, did what was demanded, certainly better than the ham who took the role in the BSO’s 2001 production.

And Charles Dutoit, long a regular presence on the podium here, and celebrating his 80th birthday this year, led the orchestra, which excels at this kind of late romantic music, in a driven, committed performance, exulting in the scintillating chromaticism of the score.

The concert opened with Mozart’s 39th symphony, the first of his final three. Some people try to make a big deal about “late” Mozart, but since he didn’t know that he was going to die so young – at age 35 – I think that’s wasted energy. In any case it is charming as is most of Mozart’s music, which is why WCRB plays it incessantly when it isn’t playing Vivaldi, but it lacks the high profile expression of the two that come after it. It was also a curious concert opener. It seems to have no direct or indirect connection with “Bluebeard’s Castle.” But it was charming, as I said above. Dutoit turned in a fine, if slightly pro forma, performance. When the music danced, Dutoit danced – in the first movement, he bounced on the podium like a kid, not a gentleman entering his ninth decade.