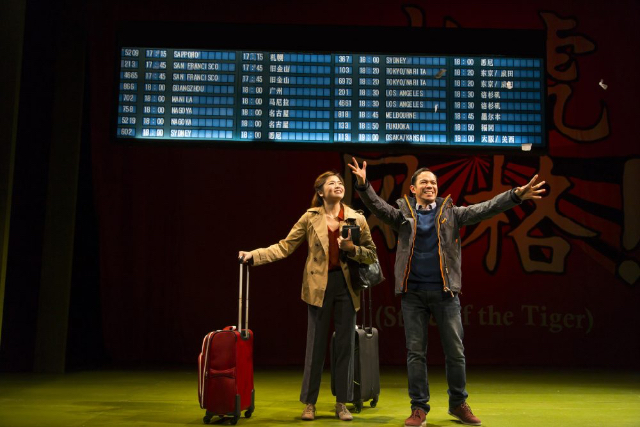 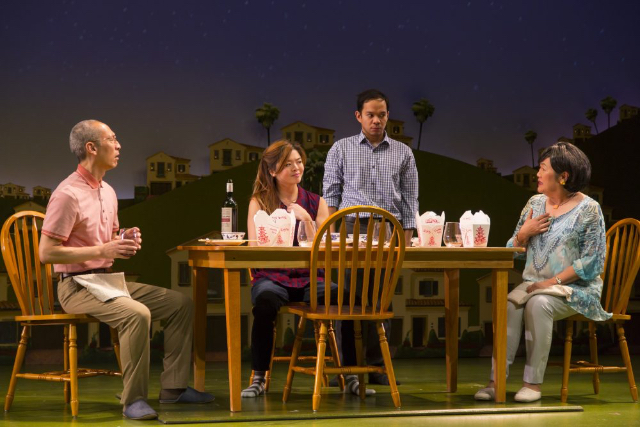 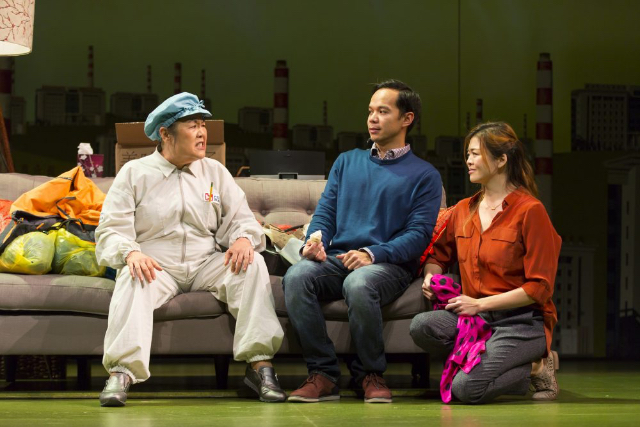 Hyphenated Americans have existed since the time of the American Revolution. Early on various ethnic groups in America have been showcased and featured in plays, radio shows and television series. So, it is not surprising that another hyphenated American play be produced. This time it is a new comedic work about contemporary Chinese-American overachievers by playwright Mike Lew, Tiger Style! It is being presented at the Huntington Theatre Company’s Calderwood Pavilion in Boston’s South End.

The story focuses on two somewhat miserable, perhaps depressed, brother and sister who were raised in the Tiger Mother method. This was articulated several years ago in the book by Amy Chau, The Battle Hymn of the Tiger Mother. Chau claims that this was a tongue-in-cheek account, but it was forever marked as a strict upbringing method that pushed Asian-American children beyond acceptable Western norms--a child's bootcamp experience to be the best that they can be.

Raised in a similar fashion by parental drill instructors to go to Yale, playwright Lew has many occasionally funny lines and even more that evoke groans, either internal or aloud, from the audience. Here is a wordy, once in a while clever culture clash. And this is filtered through an awkward, perhaps naive quality to the two Chinese-American sibling leads played by Jon Norman Schneider (Albert) and Ruibo Qian (Jennifer).

The brother and sister strangely live together in Irvine, California (supposedly for tax purposes). She is a researcher medical doctor (MD/PhD) oncologist, and he is a software code writer. Jennifer continues to high achieve while computer geek Albert seems heavily anchored in a dead-end job. Presumably both make pretty good Millennial money that would afford them housing by themselves. Also, they both went to Harvard and previously performed together in concert at Carnegie Hall. Oddly, it appears that they have and had no friends other than each other.

Jennifer is a bit more satisfied with her lot in life than Albert. But then her rough-hewn, undereducated white boyfriend of 3 years dumps her. And she appears miserable as well. Both Albert and Jennifer blame their parents for their lives not following the master plan of achievement laid out in their childhood.

With much complaining, whining and even moaning, they eventually view their lives as pathetic. They grieve over their ethnicity. They feel that they have been so burdened by it that they decide to be “white.” The first step is to confront their parents because this is what white kids would do to their over bearing parents. This is pretty much a disaster. Their parents Emily Kuroda and Francesa Jue, who play several additional roles, parry and thrust away their children’s pointed verbal sword attacks. Somehow the parents seem quite rational and pleased with what they achieved. The fault lies with the children not the parenting. Being whitely aggressive gets the brother and sister nowhere.

At work, Albert goes all “Western” and shirks his responsibilities and yells at his Asian boss at his software company. He is fired. Stereotypes, both Chinese-American and Anglo White, fly fast in word descriptions but not so humorously.

Somehow, Albert convinces his sister that they need to pivot and go full “Eastern” and travel to China. Of course, they don’t speak Chinese. She resigns her high profile, but laborious job. The end of Act One has then leaving for China.

Act Two set in China is more a cartoon than choreographed narrative. With the two siblings quite lost in the new culture, the play is often more of a clown car that lets out a lot of scary clowns rather than clever insights. The Shenzen Special Economic Zone is no paradise but an unsolvable puzzle. Toto, we are certainly not in Kansas. With much twisting and turning and needless intrigue, they somehow redirect themselves home.

At the end of the play, Jennifer and Albert realize that home is where the heart is and everything is tied up in a neat bow. However, the playwright does not teach us anything by the Quixotic journey. Though a good wordsmith, Lew does not give us any real insights into assimilation, identity and what it means to be an American. Perhaps, his word play got in the way of evocative story-telling? This is sitcom without much situation or comedy. It could have been seriously funny or semi-serious, but it just kind of meanders out of control with an unsure context.

Act 2 is just silly with its pratfalls and cartoonish situations or is it a dream sequence? It does not work very well with Act 1.

To be fair, there were a few very high notes in the production. Like almost all stagecraft at Huntington shows, the projections (by Alex Koch) and sets were first rate (created by scenic designer Wilson Chin). Also there were actors who stood out. The only non-Asian actor, Bryan T. Donovan, in the production plays three roles: the ex-boyfriend, the boorish software colleague and the officious customs agent with just enough bravado. His roles could have been broadened on so many levels into wonderful foils.

Frances Jue also plays several roles. His old Chinese man and software executive are more chewing the scenery than subtle acting. However, the most authentic expression in the entire play was his father character telling his family's American Dream story to his children. Playwright Lew missed a great opportunity here by not doing more with this characterization and authenticity.

Satire is an ancient form. It not only can tickle the funny bone but can also stimulate the intellect. Tiger Style! does not really do either. It is as if we are waiting for a long while for the tide to come in so we can surf, but when it arrives, instead of high enjoyable waves, there is only low tide froth.