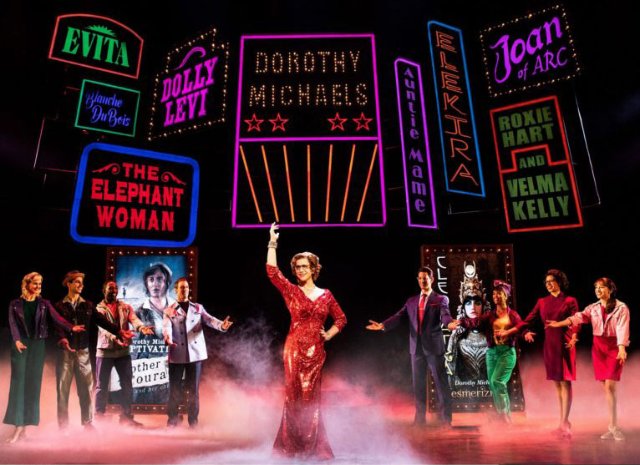 What is it about a man in drag as a matronly woman that can be so endearing? Comedian Barry Humphries has made a six-decade, satire career of it as Dame Edna, who skewers every wrong in society; Robin Williams’s title character in the movie Mrs. Doubtfire does it as a way to get visitation with his kids who live with his ex; and in the movie Tootsie, Dustin Hoffman’s Michael Dorsey becomes Dorothy Michaels as a way to get an acting job.

Now, Michael/Dorothy comes alive on Broadway. The updated book by Robert Horn in the musical version of Tootsie shifts the action from the soap opera world to that of Broadway and improves the narrative and dynamics. David Yazbeck’s pop score with sparkling and penetrating lyrics adds another dimension with a sharper focus on female empowerment. The result is a standing-ovation charmer with loveable characters and a heart of gold. The show has also earned critical recognition on the awards circuit, including 10 Tony nominations and 2 wins.

Although the update recognizes the changing political landscape and addresses #MeToo issues, it remains a comedy that doesn’t want to lose its edge with political correctness or preachiness. Thus, Michael, as a talented and principled perfectionist who can’t keep acting jobs, takes one away from a woman without an equitable offset. Also, while in real life, women in the workplace are held to higher standards than men, in this case, Dorothy actually gets away with the same kind of behaviors that Michael doesn’t. She stands up to the demeaning director, telling him that she’s not Honey or Sweetie or Tootsie, and wins the respect of her fellow cast members. The reason she can do that, however, is because the producer of the show in which Dorothy is cast happens to be a woman who is supportive.

The play is really about relationships, with the central ones involving Dorothy. Michael/Dorothy are played by Santino Fontana who manages the often frantic and clumsy wardrobe, voice, and affect changes with consummate skill. Michael as Dorothy reveals a comforting feminine side, but driven by his male yearnings, he falls in love with vulnerable fellow actor Julie, portrayed by charming and smooth-voiced Lilli Cooper. The one possible discordant note in the casting is the notion that in real life, people of similar attractiveness appeal to one another. Yet Dorothy seems more like a kindly aunt to Julie than a potential lover.

But how does Michael maintain the ruse when Julie shows affection for Dorothy? Their reaching for each other is affectingly divulged in the touching solo/duet “Who Are You?”

Another key but antagonistic relationship involves director Ron Carlisle. Self-indulgent, pompous, and lascivious, he looks like an aging, beatnik Mitch Miller (younger readers can check Google Images) with the electrocuted hair style of Kramer from the TV series Seinfeld. Played with flair by Reg Rogers, he has banned Michael from any of his shows, and later harasses Dorothy because she stands up to him.

Several supporting parts are significant and played with great hilarity. Andy Grotelueschen as bald and fuzzy bearded Jeff, Michael’s roommate, displays droll, sardonic humor and is the king of the deadpan stare. Meanwhile, the hilarious Sarah Stiles plays Michael’s friend, squeaky and ditsy Sandy, who always seems to misunderstand what’s happening, and like him, is an unsuccessful wannabe near the aspiring actor expiration date. She sings the show stopper number about her plight, “What’s Gonna Happen?” in breathtaking, machine-gun style. Finally, John Behlmann is Max, a dimwitted, love-struck actor whose greatest skill is going beefcake by ripping off his shirt to reveal his sculpted torso.

In all, it’s a fast-paced and consistently funny evening spent with loveable characters who you’d like to see in the future.

Tootsie with music and lyrics by David Yazbek and book by Robert Horn plays at the Marquis Theater, 210 West 46th St., New York, New York on an open-ended run.

Posted courtesy of For All Events,