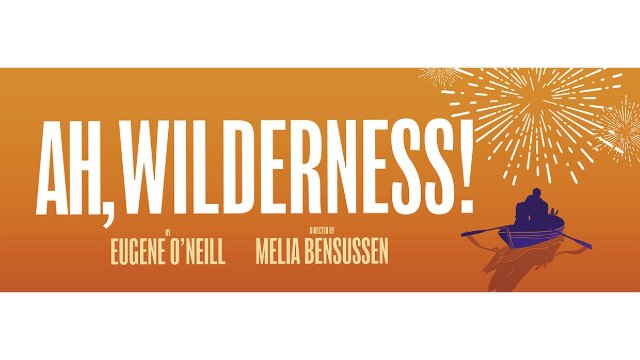 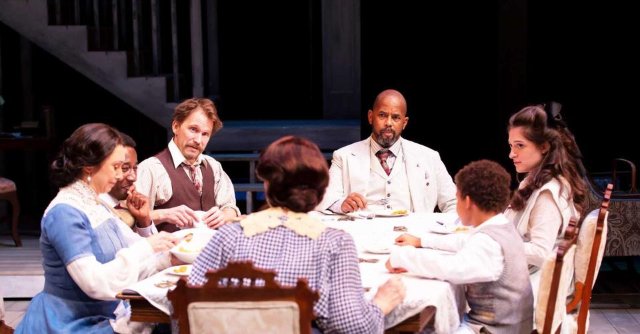 Melia Bensussen’s directorial debut at Hartford Stage was long delayed due to the Pandemic but well worth waiting for. Ah, Wilderness! was supposed to end the 2019-20 season, instead it is opening the 2021-22 season, running through Sunday, Nov. 7.

Bensussen demonstrates a sure hand with this Eugene O’Neill play set in Connecticut on July 4, 1906. In Ah, Wilderness!, O’Neill who is better known for his dramas of love, loss, disillusionment, self-delusion and alcoholism, shows his lighter touch. It is a family comedy about some of the same subjects but more upbeat.

It centers on the Miller family: father Nat (the editor of the local newspaper), his wife Essie and four children, plus the father’s spinster sister (Lily) and the mother’s alcoholic brother (Sid). Richard, the second son, a teenager of perhaps 16 or 17, is the center of the plot. He exasperates his mother by reading books she deems inappropriate, and challenges family values regularly. He is rebelling against society while discovering the inequities in it. So he spouts socialism, while also quoting love poetry.

It is these ideas that get him in trouble with the father of Muriel, the girl he “loves;” he has sent her letters espousing these ideas and quoting from the “Rubaiyat of Omar Khayyam”. When her father delivers a letter from Muriel breaking off the relationship, Richard tries to be cynical and tragic at the same time, to somewhat comic effect.

But while most O’Neill plays would end in heartbreak, Ah Wilderness! doesn’t. Richard and Muriel reconcile, he has grown up some, and he has realized that his parents’ ideas may be worth considering.

A secondary plot involves Lily and Sid. She loves him but won’t marry him; despite constant promises to “reform,” Sid just can’t stay away from alcohol which leads him to constantly lose jobs. But even if there isn’t a miracle ending for these two, you still feel as though it isn’t a tragedy either. They may never be husband and wife, but the affection, friendship and tolerance will continue.

Bensussen made a terrific choice when she decided to add some music to the play. At various times, members of the family sing period songs, just as many American families would do in that period, gathering around a piano. It isn’t intrusive or inappropriate. At the beginning, the entire company sings part of George M. Cohan’s “I’m a Yankee Doodle Dandy,” and later other songs are sung including the vaudeville hit “Waitin’ at the Church.”

The songs provide subtle counterpoints to the action as well as adding a light touch. (The play was turned into a musical in the 1950s – Take Me Along­ – starring Jackie Gleason as Sid and Walter Pidgeon as the father. A young Robert Morse played Richard.)

Michael Boatman provides the anchor to the cast as the sensible father, Nat. His level-headedness balances his wife, Essie’s concern about Richard’s reading material. But while he conveys understanding of youthful rebellion, that doesn’t mean he lets it go unchallenged. His scenes with Essie are masterful examples of small gestures and expressions conveying a great deal to comic effect. Antoinette LaVecchia, as Essie, doesn’t go overboard with the actions and reactions. This role can become a stereotype of the over protective mother and somewhat ditzy woman. LaVecchia keeps her grounded.

As Lily and Sid, Natascia Diaz and McCaleb Burnett bring warmth and regret to their roles. Burnett doesn’t overplay Sid’s behavior or actions while “under the influence” and seems honestly contrite afterwards though self-aware that the whole thing will be repeated again and again. Diaz keeps Lily from being a martyr. Her Lily is both self-possessed and regretful.

Richard is a difficult role if only because adolescents can be both annoying and oblivious; Richard is both – convinced of the correctness of his social and political opinions and unaware of his overly-dramatic view of his life. As Richard, Jaevon Williams doesn’t always succeed in balancing it all. In some scenes he is excellent, but in the third act during his soliloquy while waiting to meet Muriel, he just doesn’t ring true.

Bensussen made an interesting choice in casting Brittany Anikka Liu as both the prostitute that Richard meets in a “dive” the evening of July4 and later as Muriel. Both have limited stage time and Liu is very good in both, but there is a tendency to want to attach greater meaning to this decision.

The stage set by James Noone suggests both a summer house and the water with multiple levels and a slated backdrop. Through it you feel as though you can catch the summer breezes off the water. Wen-Ling Liao provides atmospheric lightinge. The costumes by Olivera Gajic are right for the period.

Overall this is an auspicious debut for Bensussen at Hartford Stage.

Go see Ah, Wilderness! It is as enjoyable as a summer day at the shore. For tickets visit HartfordStage.org.