Chehkov's Methods Revealed in a Romp 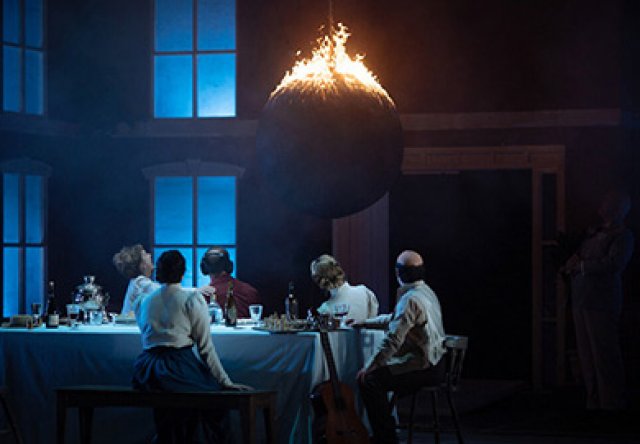 Dead Center: Chekhov’s First Play has had a jam-packed audience in its run at the Irish Arts Center in New York.  To be sure the city is crammed with actors who play Chekhov roles. This play is a tip to fathoming their secrets.  It is also pure fun for any theater goer.

Who would dare poke fun at the master?  Why, the master himself.  His path to humor is a tortuous one.  Ben Kidd and Bush Moukarzel tred it both delicately and at full throttle when that style seems right.

Every audience member will hear the show directly to the ears in a headset which, we are cautioned, must be set right for left and right sounds.  Why we need this set is less for amplification than for off stage commentary by one of the directors, Bush Moukarzel.

Yes, we are going to learn quickly what portraying reality means.  Chekhov wrote early on: the demand is made that the hero and heroine of the play should be dramatically effective.  But in life people do not shoot themselves, or fall in love, or deliver themselves as clever sayings. They spend most of their time eating, drinking, running after women or men, or talking nonsense. It is therefore necessary that this should be shown on stage.  This production spends most of its time as described above.

Platonov,  from the early play That Worthless Fellow Platonov, is central, although he may have no standing in the first Act. Self-dramatization makes it necessary for each character, including the director, to operate in their own world. To be completely self-centered makes social responsibility almost impossible  Morbid concerns dominate your thoughts and problems. This is what the characters and the director have in common.  Noone cares about what they say, just how they say it.

In addition to newly added witty and silly comments, the current adaptors now present two new levels of reality.  The director is really an element of staged production.  He gets to comment on how his talent is performing.  He kills himself.

In the second part, we will be moved into the reality of the present without commentary. Tuberculosis has become cancer. Formal  dress codes are stripped away. The Russian mansion is felled and one supposes everyone has left for Moscow. This is the real world Chekhov cared about, the world that exists under Pirandellian masks.

Chekhov made a big point about the gun.  If you introduce a gun, it must be used before the play ends. The director immediately wields a gun. It enters the play and is passed around the table, each actor taking a different approach to its use: Russian roulette, blanks, and a ceiling shot that results in cascading plaster.  The gun is not only used.  It becomes central.

The diretor and the actors try to be clever, as Chekhov does.  Yet on stage everyone is falling in love with everyone else like The Sea Gull.  (we hear seagulls on the sound track).  Their relationships are dull and true to life. Yet these relationships are never realized. We have the deep Chekhovian sense (picked up by Beckett) that we are in a place where nothing is ever going to happen.

After the director shoots himself, the play  catches up to the present, with semi nudity, guitar songs, and more conversation. It’s funny, not sad. The soulful, frustrated actors we see everywhere in Chekhov become a single actor who does voice-overs for an Irish bank and a rich man who wants to buy the estate and turn it into apartments. We are in the present with Chekhov.

We get to feel the steps Chekhov took to get to his truths. Text additions by Ben Kidd and the director outdo Chekhov in their ludicrous positions. They are static, isolated and disconnected statements of opinion and ironically true.

Like Chekhov, some remarks are incisive. Yet the characters do the opposite of the ludicrous statements they’ve expounded. Trilensky points out that “Mary is not really a fool, but merely a victim of his dissatisfaction” with his own life.

Chekhov learned to trust and believe in people. Otherwise life becomes impossible. We never feel the terror of isolation so common in Chekhov. Escape through coffee, vodka, brandy, religious belief, or sleep is so soothing.

Comedy is not Aristotle's, where characters of a lower type, whose faults are something ludicrous in them.  Rather than faults being ludicrous, phrases and sentences that are incongruous order of the dialogue. Self-importance suggests superficial chaos.

Deeper meaning where we laugh with a lump in our throats isn't here. Noone says, like Uncle Vanya:  It is a perfect day to hang myself while his mother is tending the chickens clucking “Chick, chick, chick.”

Chekhov makes no moral judgments. He finds none guilty, but he doesn’t acquit anyone either. The director does comment on the actors’ talents or lack thereof. He finds them guilt of failing to perform well. Until of course he shoots himself.

A wild and wonderful evening of theater at the Irish Arts Center.