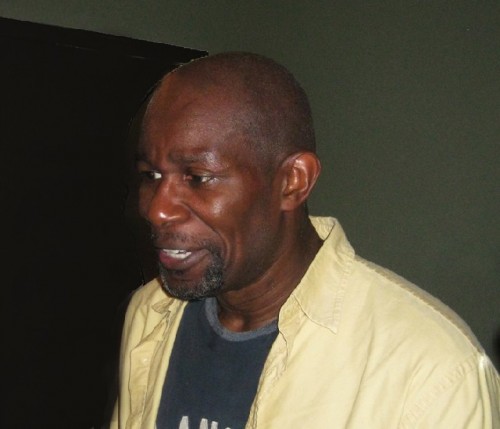 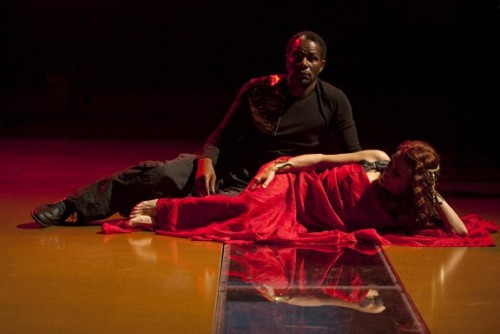 Today John Douglas Thompson and Kate Mulgrew give their final performances in Antony and Cleopatra at Hartford Stage Company.

For Thompson, this leads to much needed down time. There was literally a day between the end of his summer long performance as Richard III, at Shakespeare & Company, and rehearsals in Hartford. After some time off he starts rehearsals for Macbeth, Off Broadway, opening in February.

These past couple of years have been busy. For an actor there has been an enviable series of great and challenging roles. We first saw him three years ago, in Othello, in Lenox. It was a role he repeated last summer adding a three person contemporary play The Dreamer Examines His Pillow. We saw him that fall in The Emperor Jones which had a long run Off Broadway with great reviews. This summer, Richard III set attendance records for S&Co. He has a long association with the company and is a member of its board of directors.

Critics have come to describe Thompson as one of the leading classical actors of his generation. But Thompson started a career in theatre relatively late. Now 47, he is just becoming established with audiences and critics. While he finds regular work he has not yet become a marquee star on Broadway. Producers, with eyes on the bottom line, often cast Hollywood stars rather than lesser known stage veterans. This trend is reflected in the annual Tony awards which tend to roil the theatre community.

Given the pay scale Off Broadway, and the common practice of “Favored Nation” in which all of the actors get equal pay, it is very difficult to survive as an actor living in New York. Actors hope to find work on TV, movies, or supporting roles on Broadway.

In this dynamic nothing succeeds like success. Thompson has an expanding portfolio of performing the great roles in Shakespeare’s Canon. These stunning performances have evoked rave reviews from major critics including Ben Brantley for the New York Times. One senses that his career is poised for a major breakthrough. There is also frustration that performing those canonical roles are generally one shot deals. He talks about British actors, at the Royal Shakespeare Company, who say that by their fourth or fifth production of Antony, or Richard, they might start to get it right.

There is another level of frustration that, although we have seen artists of color perform Othello, he has never seen one perform Antony, Richard, or Macbeth. “That’s just not right” he commented. With my wife, Astrid Hiemer, we talked over dinner following his Sunday matinee in Hartford. In continuing to take on the great roles he hopes to open the doors for the next generation. There were a number of young, African American actors in the large Hartford cast. He spoke warmly of interacting with them and how they “picked his brain.”

What follows is the first of several installments focused on Antony and Cleopatra as well as the challenges of the canon. It is a segment of an ongoing commitment to engage in dialogues about challenges of the craft. The exchanges started with Othello, Emperor Jones, and, more recently, Richard III. By now. there is a lot behind us and ever more focus on the specifics of the work which we are exploring in depth. We plan to meet this winter to discuss The Scottish play.

Charles Giuliano In general I find the play hard to follow. Where would you put Antony and Cleopatra in the Canon?

John Douglas Thompson  I would put it as one of the lesser done plays. A problematic play also as well. But a play that needs more attention.  It needs to be done more to be put into our collective vocabulary. Theatres shy away from it because it’s a big play.

CG In what sense?

JDT It has more scenes than any other play. It has 43 scenes. You need a big cast to convey the expansiveness of it because it entails Rome and Egypt. Going back and forth there are other sites in the context of the play. That are mentioned and talked about.

CG What are the scenes in Rome?

JDT You might not have been paying attention. (laughter) It’s unyielding and it has a lot of scenes. More scenes than any other Shakespeare play. This has between 42 and 48 scenes where the average Shakespeare play may have 20. Some scenes are within the context of like four lines. There are two characters and they exchange dialogue then boom you are off to another scene. So it traipses all over the map. Or at least that part of the world during that time. I  think  that’s what Shakespeare wanted to do with Plutarch’s writings which were about Marc Antony. He wanted to make a play out of that.

CG Did you read Plutarch?

CG What did you get out of the historical Antony?

JDT It’s not like the Antony we are familiar with the iconic Antony. Conveyed by the movie with Elizabeth Taylor and Richard Burton. Or  the Hollywood version.

CG Which was one of the all time flops by the way.

JDT But still it stuck with people in the sense of that’s what they think of as Antony and Cleopatra. Until they come to the play, because it is never done. People rarely see the play unless they are serious Shakespeare goers, and have gone to see a lot of the plays, and are familiar with the canon. But those people who aren’t, and there are a lot of those people, they would have no way to look at this play because there’s nothing else like it in the canon. Unless they have seen the other Greek plays like Coriolanus, Titus Andronicus, some of the other Roman and Greek plays. If you haven’t seen those then, with Antony and Cleopatra, it’s oh didn’t Elizabeth Taylor play Cleopatra with Richard Burton? That’s what it’s about but it’s about so much more than that. So I think people just don’t have a vocabulary for the play. On the other side, I think a vocabulary should be developed. More theatres should do this play because it’s incredibly challenging. There are some good payoffs.

CG What do you mean by payoffs?

JDT Let me finish my thought. You can’t always go with the popular plays. And do those over and over and over again. Ad infinitum. Let us explore some of these plays which are not done a lot. What do we mine from them? One of the things I think is great about this is the political intrigue. A play like this has a lot of political intrigue. Similar to the history plays but this is all B.C. These are some of the only plays of his that were before B.C. Most of them are after that period of time so you are dealing with a whole different history if you will. To get involved with the particular aspects of this world B.C. is kind of interesting.

Also, you’re dealing with an adult love story. Unlike Romeo and Juliet. Not a lot of Shakespeare plays have adult love stories. You’ve got maybe Othello which is different. This play is kind of like Romeo and Juliet but for adults. With political intrigue. So, it’s pretty good. There’s stuff there to mine. It’s worth the effort of theatres to look at and try to raise a production of it. I don’t think you think so Charles.

CG So now you think for me?

JDT It’s something for Shakespeare and Company to explore and educate theatre goers. Here is one of Shakespeare’s plays that’s rarely done but there is merit. If you are willing to look into it. First of all it’s a great role for a woman. There are not than many in Shakespeare and this is the largest woman’s role. On that basis alone, for one of the actresses in your company looking for a big role, this is it. This is the largest. There are no others which come within maybe a hundred lines.

CG Tina Packer played it but it was before our time.

JDT Yes, maybe four or five years ago. I remember seeing that. We have had a lot of S&Co people coming through. It was done in Boston at the Shakespeare Project. The Royal Shakespeare Company is doing it. It will be done in NY over the summer so the play is getting done more.

JDT So it merits doing. Depending on where you do it you will have varying levels of sophistication. Of those people who have seen it, or experienced it, or have  any knowledge of it. I think the people who don’t have any knowledge of it can look at it in two ways. Oh, this is exciting, but I don’t think it’s among his best plays.

CG Do you have any misgivings about taking on a role like this? Or is it more a matter of if I get offered a Shakespeare lead I’m going to do it no matter what?

JDT Oh no, no, this is something I wanted to do.

CG What is the decision making process knowing this is a more difficult, challenging role? How does it fit your ambition to work you way through the major roles in the canon?

JDT You have to do these too. I wanted to do it because I knew it would be challenging. I remember doing another production of this at Theatre for as New Audience. I played Enobarbus.

JDT It’s a great role I loved it.

JDT He’s wonderful, So we did that and I said wow some day I would love to play Antony. I knew how challenging it would be. I wanted to do it straight on right after doing Richard (III). I don’t want to shy away from things that appear to be or are difficult. Part of my process is I know I want to do this and I know it’s going to be hard. Lord knows. But I want to do it.

Astrid Hiemer Is there any documentation of how this play was done during Shakespeare’s time?

JDT I don’t know and that’s a good question. I haven’t come across anything but I suspect that even back in Shakespeare’s time it was not done so much. As like the majors R&J, Macbeth, Midsummer’s Night Dream, The Henrys, the History Cycle, that sort of stuff. I haven’t done the full research.

CG As I understand it they didn’t often repeat. They played a few performances and that was it. That he more or less wrote a new play for each season.

JDT Certain shows were brought back on a regular basis. The same thing with us now the Othellos, the Macbeths, Romeo and Juliet, King Lear. Continually repeated. The Tempest.

(There are a lot of flies. John swats at them)

JDT They are so annoying. I hate to kill any living creature.

JDT I never kill critics. Never have, never will.

CG Just give them a hard time.

JDT There’s another one (fly). We have to get this one. Where were we? What’s your next question? I’m listening.