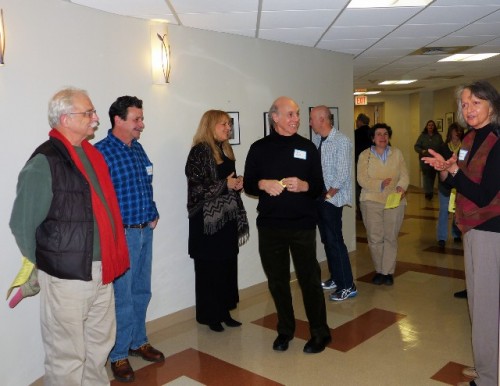 Curator Sharon Carson, right, leads guests on a tour of the hospital installation. 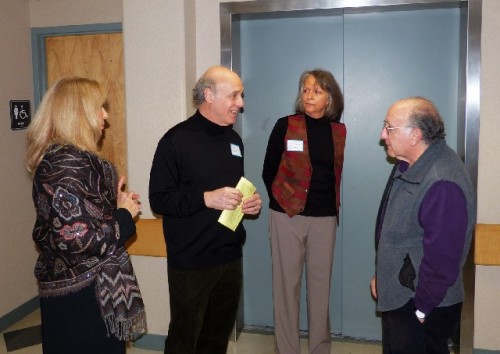 Carson takes the elevator with guests to the next floor. 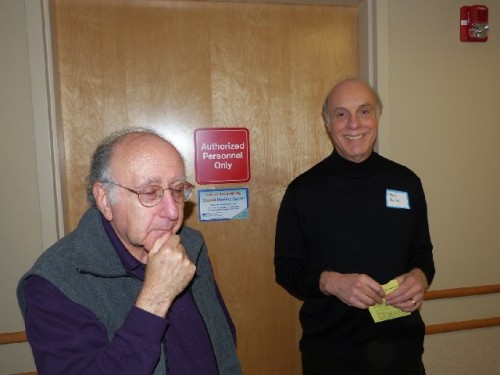 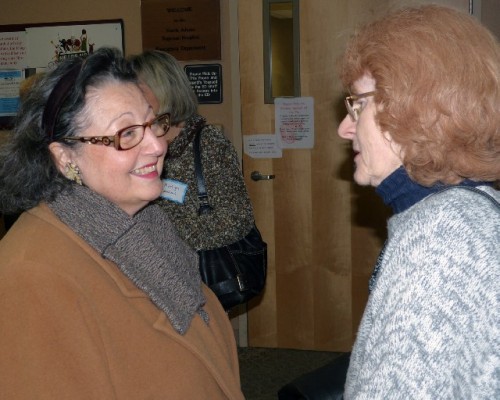 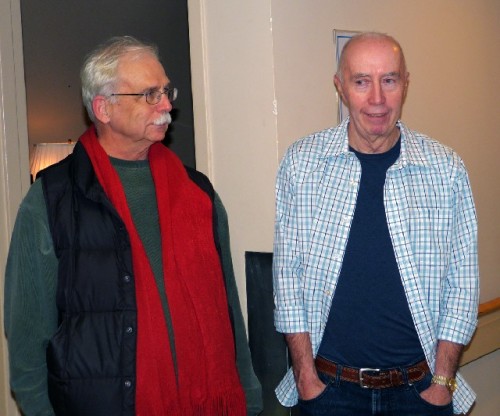 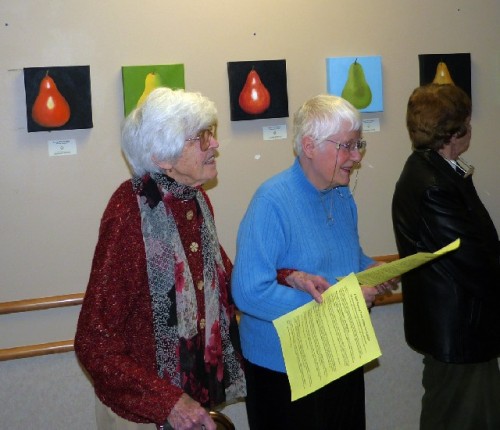 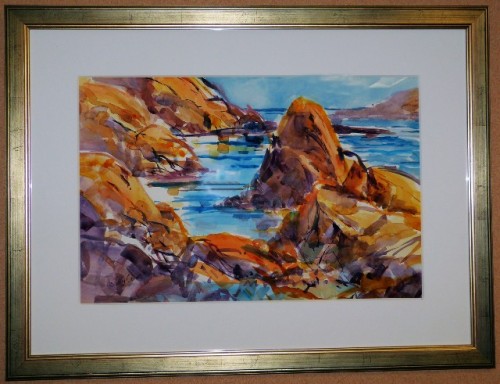 A landscape watercolor by Tony Conner. 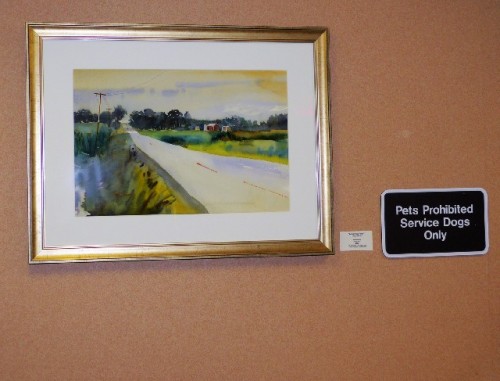 Another work by Conner. 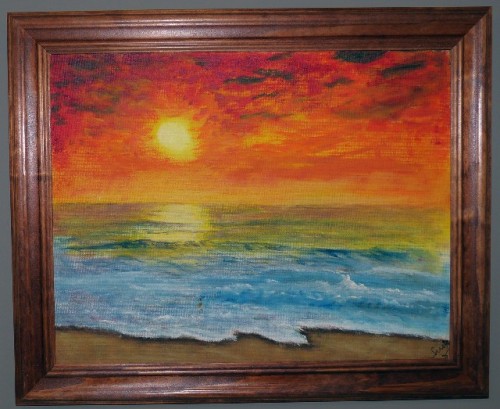 A dramatic sunset by Susan Stanton. 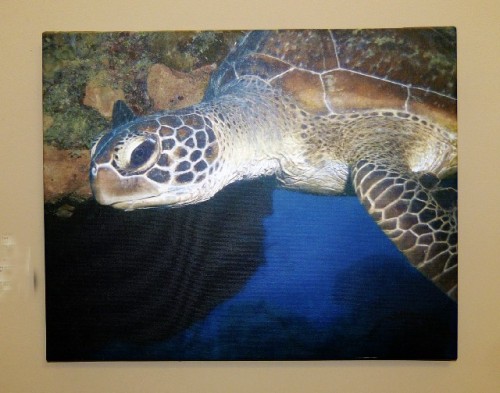 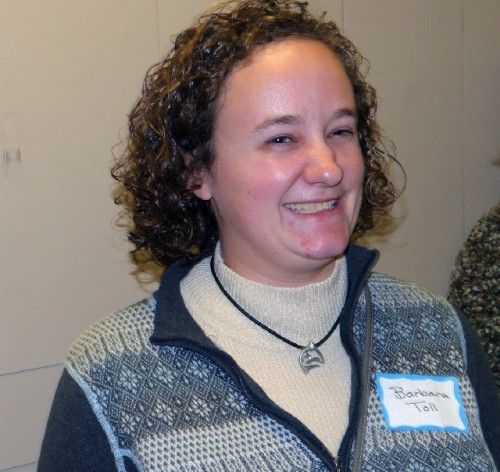 Barbara Toll is showing images she shot during a visit to Australia. 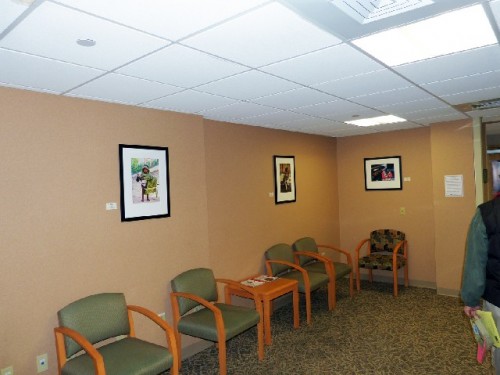 A waiting room displays photographs of India by Bonnie Guild. 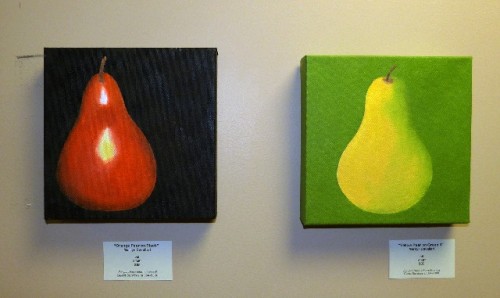 From a series of pear paintings by Marilyn Cavallari. 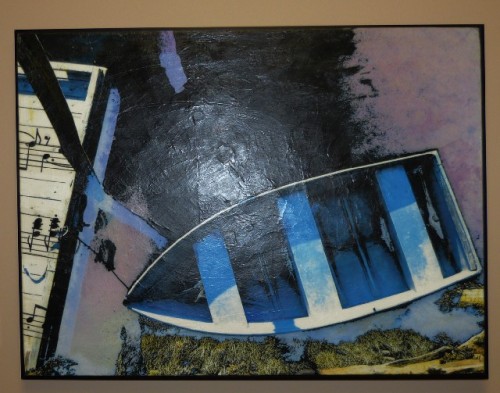 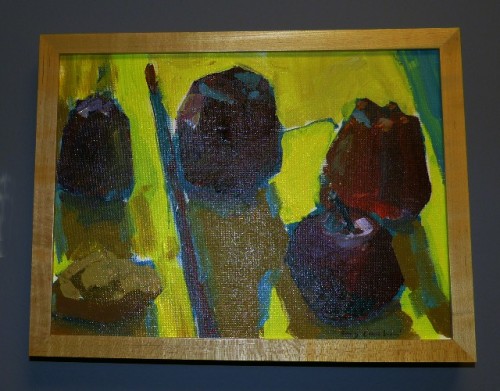 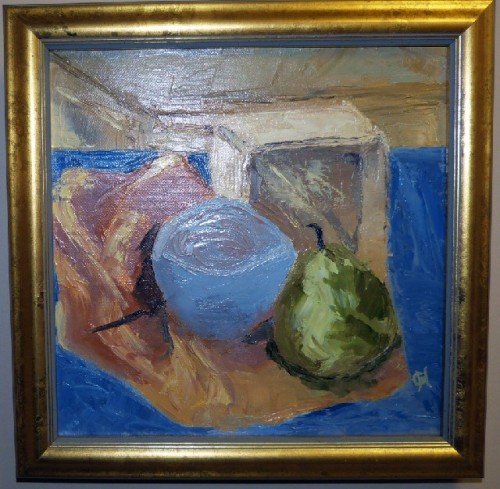 A still life by Ghetta Hirsch. 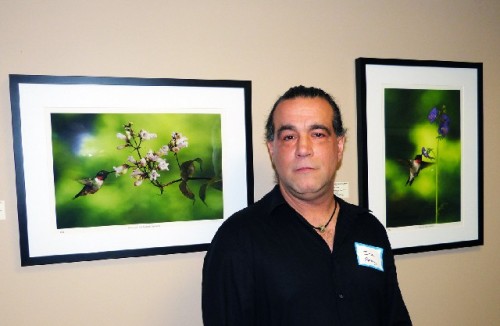 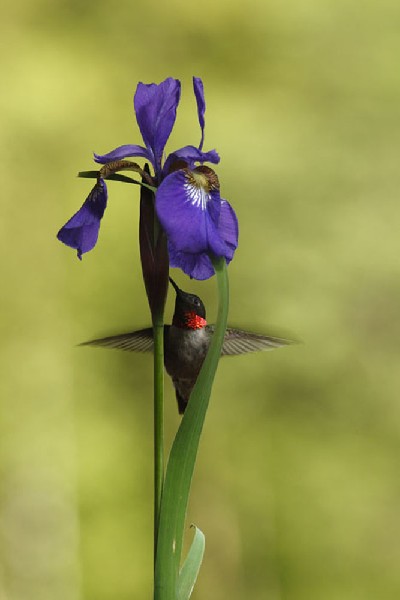 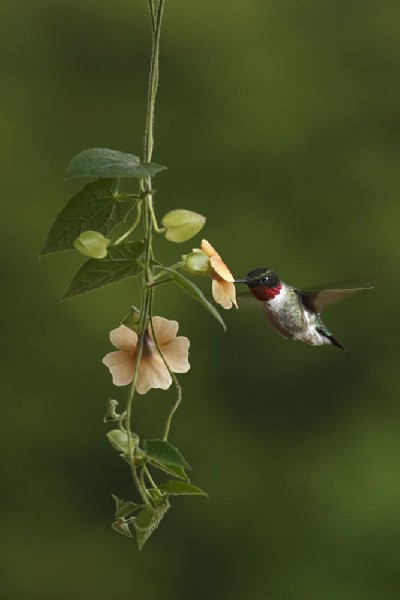 Grey ’trains" the birds to pose for him. 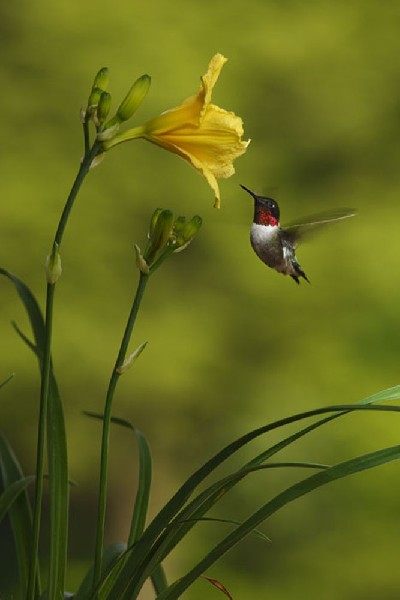 It has taken several years to assemble a handful of portfolio quality images. 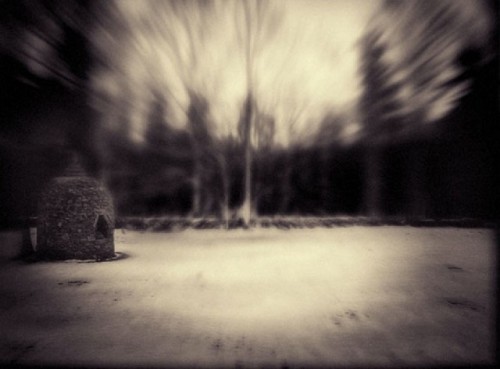 Cherish the Silence by Bill Guild. 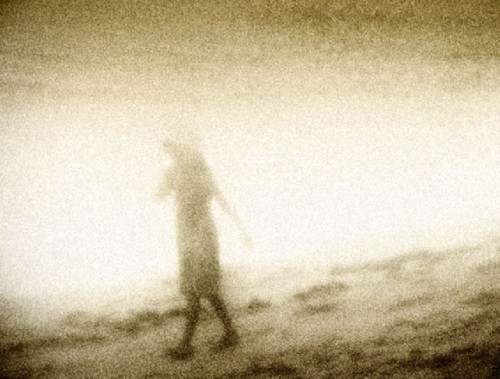 Merging into Joy a pin hole photograph by Guild. 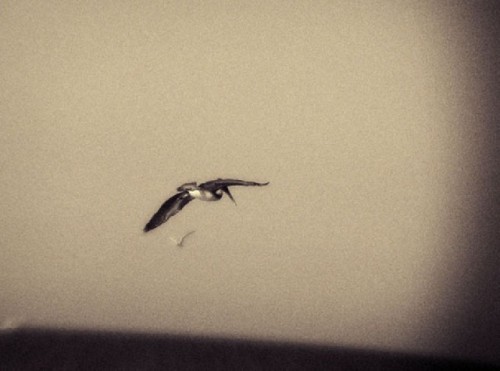 The Soul Loves to Soar by Guild. 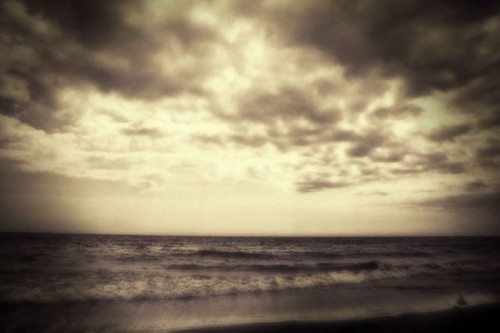 Emptiness Is What Every Soul Wants. 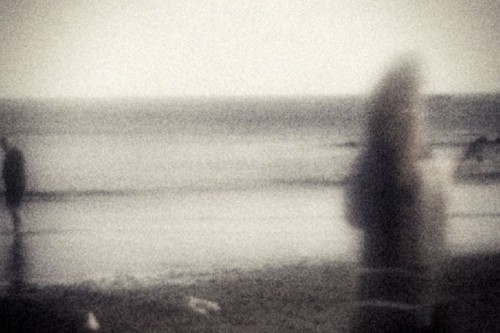 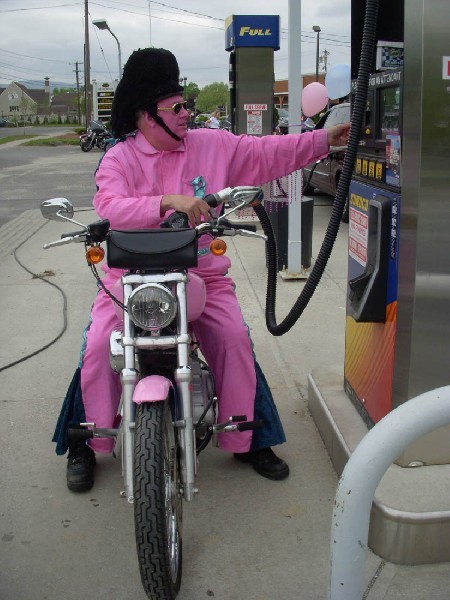 Elvis at the Pump by Gillian Jones. 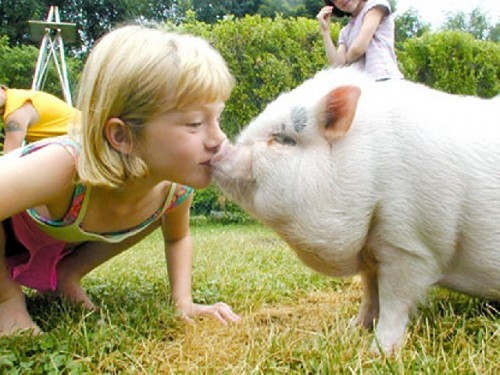 From the Twenty Year Retrospective of Gillian Jones. 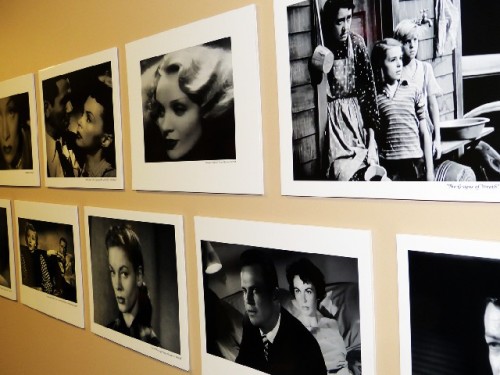 A visit to the hospital evokes concern and anxiety for patients or accompanying loved ones. In an institutional context works of art tend to be benign and decorative. Often there are framed generic prints of works by the impressionist masters.

For the past several years, however, the North Adams Regional Hospital has taken a different approach with semi-annual installations of its Community Art Program.

Initially, the hospital hired the artist Debi Pendell to organize a call for artists and oversee an installation throughout the hospital. There was a stipend involved, until facing budget cutbacks, the administration decided that it could no longer afford to pay a curator.

“Since taking over as curator in 2009,” the current curator Sharon Carson informed us “I've kept the program going at no cost to the hospital.  The current show has been funded in part by the Local Cultural Council of Northern Berkshire, as well as funds from previous years fundraising efforts and also voluntary donations from artists who sell work at the exhibits.”

That would appear to be a win win for the hospital as well as an opportunity for the thriving regional arts community to have their work seen.

After a cancellation because of Hurricane Sandy, the opening reception and a tour of the latest installation, was rescheduled for this week.

As Carson points out the hospital is not a commercial gallery or museum. As a community driven, grass roots effort, the results while eclectic and uneven, always includes enticing surprises.

The most significant change, this time, was a reversal of a taboo against the graven image. The introduction of the human element has resulted in a more diverse exhibition than one confined to nature studies and abstractions.

The mandate of the works on view is to be upbeat and life affirming as well as to reflect the unique beauty of the Berkshires.

For the most part the scale of the works ranges from moderate to intimate. Accordingly, it has taken many works, often a dozen or more by participating artists, to fill the many corridors and waiting rooms. It also allows for an opportunity to see the work of individual artists in depth. Overall, there are images by more than 20 artists and some 200 plus works.

The current installation will remain on view through April. All of the works are for sale and one artist informed me that he has already sold three pieces.

Many of the artists on display will be familiar from a range of community based exhibitions such as the Berkshire Salon at the Eclipse Mill Gallery, Open Studios, and the cluster of annual exhibitions representing DownStreet. It is always interesting to catch up with a new body of work by artists we have been following for a number of years. There were also several new artists some of whom are showing in the region for the first time.

Bonnie and Bill Guild spent time in India this past year. Images taken during that travel by Bonnie are displayed in a waiting room. The photographs are rich and colorful as one would expect given their subject.

The photographs by Bill Guild represent a new direction. They are created by a complex process of a pin hole over the lens of a digital camera. Many artists have used pin hole photography for its unique, impressionist manner of softening the landscape through a long exposure that also mutates the colors. Embracing this technique Guild has also been inspired by the Pictorialist movement of the late 19th and early 20th century. The exponents of the style attempted to expand photography beyond its function as a mechanical device and to seek aesthetic results on a par with fine arts media.

Guild comments that “In this display, Here so Lightly, I have used the properties of a primitive pin-hole lens coupled with a high resolution digital camera to subtly deconstruct our everyday reality. People and objects take on an almost ethereal quality.  Subjects may step off a defined path or exist only on the margins of the frame. The effect is further enhanced by carefully selecting a watercolor paper treated to create an archival printing medium.”

There was a sense of enchantment viewing the Film Noir series my first encounter with a witty and adventurous photographer, Stephen Danker.  There was a long wall of two rows of parallel, black and white movie stills from the Golden Age of Hollywood. What fun to see all of these iconic movie stars.

One does not expect to encounter a hospital based project that entails the cutting edge aspects of appropriation, conceptualism and deconstruction. But, bravo, voila.

In another area Danker is showing abstract photographs derived through Photoshop. Explaining a piece to onlookers he described how the grisaille image had been created entirely by manipulation of the mouse. This is interesting work and we hope to see it again.

Similarly, it was a thrill to see a display of Ian Grey’s remarkably complex and ambitious Hummingbirds Project. Grey lives in the woods just up Route Two in the hamlet of Florida.

During the “season” Grey puts in ten hour days with a digital camera and flash set up next to flowers and bird feeders. Over the course of several months he “trains” his feathered friends, all of whom he names, to very precisely hover next to flowers from which they extract nourishing nectar.

The frames are shot in burst of ten per second with coordinated flash which has been precisely calibrated. This results in a thousand plus frames each day. In an entire season of work, this past summer was particularly creative and successful. There are a handful of keepers or what he calls portfolio pieces. These are edited and enhanced through Photoshop and then printed.

This summer the North Adams Transcript photographer, Gillian Jones, had a twenty year retrospective of her journalistic images at Gallery 51. A selection of that now iconic body of work is on display at the Hospital.

This was our first exposure to the marine photography of scuba diver Barbara Toll. The resultant images are enticing with gorgeously fresh colors. During the opening she told us that some of the shots were taken in the ocean off the coast of Australia. While Toll was presenting the work her toddler was roaming about taking snap shots with an iPhone.

Perhaps it won’t be long before we get to see his work. Clearly he was inspired by the Community Art Project.