Waiting for Godot by the Druid Theatre 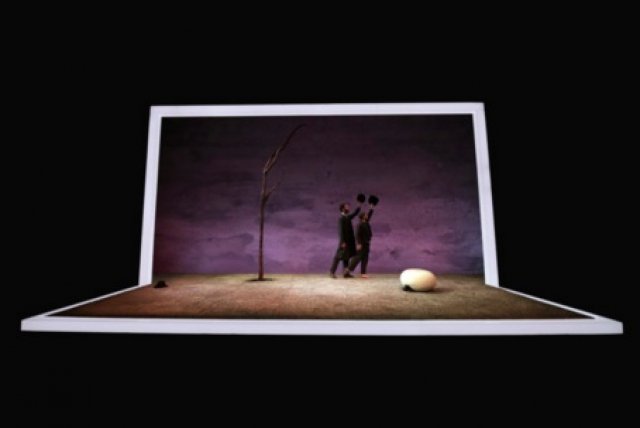 Waiting for Godot at the White Light Festival, Lincoln Center 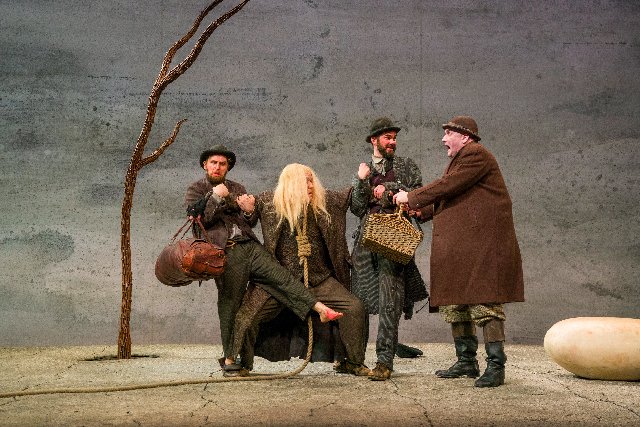 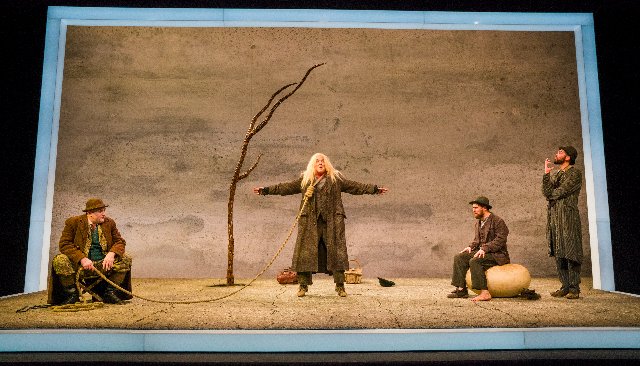 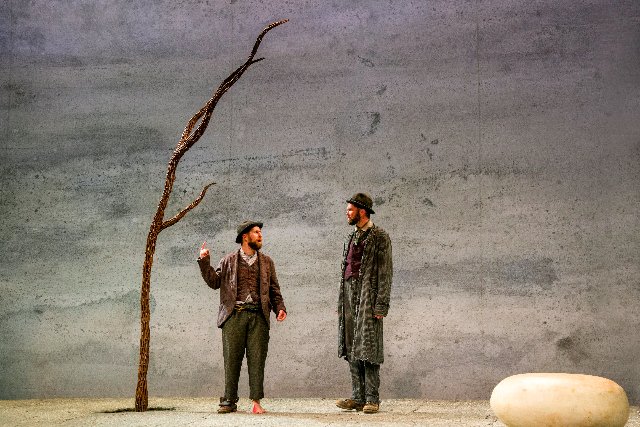 Small signs of hope. A leaf will emerge, as Aaron Monaghan and Marty Rea wait for Godot. Photo by Richard Termine

Waiting for Godot with the Druid Theater Company, directed brilliantly by Garry Hynes, is an evening full of laughs in a bunker’s claustrophobic landscape. Samuel Beckett, a member of the French resistance, escaped Paris before the Gestapo captured him. The terror of the years that followed is translated in Godot.  Its context is violent. The struggle to understand the beatings, the burnings and blindness the playwright witnessed is put on stage by a superb quartet to actors, Aaron Monaghan, Marty Rea, Garrett Lombard and Rory Nolan. Theirs is a struggle to understand. They both subtly and brazenly negotiate the space between nothingness and rooted balderdash.

Beckett also struggled.  Writing Godot, he said, “The expression that there is nothing to express, nothing from which to express, no power to express, together with the obligation to express” requires a new art.

Estragon sits on the stage for a full fifteen minutes before the lights dim, stalling the action, waiting for the narrative to begin and the show to start. Try anything as you struggle to speak. That’s what the Druid troop does.

Gesture is crucial.  Vladimir and Estragon leap up and drop down into spy position, hands alert over the eyes, back to back, looking east and east for the arrival anyone: Pozzo, Lucky or maybe if they’re really lucky, Godot.

Very broad humor like the attempt to assume a tree pose near the treasured tree, lone with a stone as scenic elements, falls wildly flat as the two tramps fail miserably and yet are crudely funny.  The playwright is too, as he whiffs farts and the soles of shoes which smell like limburger cheese.  Can crudity cut through pain of waiting?

The set for this production is framed as a laptop.  The screen area is the skyline, which moves from browns and siennas to a deep blue and then black.  The drama travels on the keyboard area, the floor of the stage.  Producers have resisted the temptation to add elements to the spare story. Only the rock and the tree, which blossoms a leaf heralded by the two featured tramps as jungle growth, adorn the stage. The leaf is like sprouting something new in words in Act II, largely a repetition of the first act, as the tramps continue to press on the limits of paralysis.

Hand-held props are emphasized. Chaplinesque hats are juggled, clownish shoes are left at the end of the day in the customary fifth position of clown posture, and outsized clothing falls off everyone. Vigilance is in the hand, not in the words.

Events through which the playwright lived are unspeakable, yet the magic of Beckett’s language in his own native Irish lilt is seductive in this production. Agonies and ecstasies are emphasized in the words held in special ways as they are spoken by all the actors.  Aaron Monaghan and Marty Rea dominate the language of the drama, and each relishes his lines, doing reverses on a dime, offering painfully long pauses which become a silent comment.  Garrett Lombard (Lucky) brings down the house with his brilliant speech.  For the moment, there is a story teller on stage, and then he disappears into silence. Rory Nolan (Pozzo) can barely move, although he has clearly memorized his whip and rope routines. The tramps prop him up so he can continue.

After an unspeakable experience, the impulse to think that it is over is understandable. The tramps consider death by hanging, but their rope is too short and turns out to be too thin. Death is an inaccessible option. Perhaps the tramps will figure out another method in the morning, which will never come, because we are out of time. Yet theater continues to exist in the hands of these compelling Druid artists at the White Light Festival.