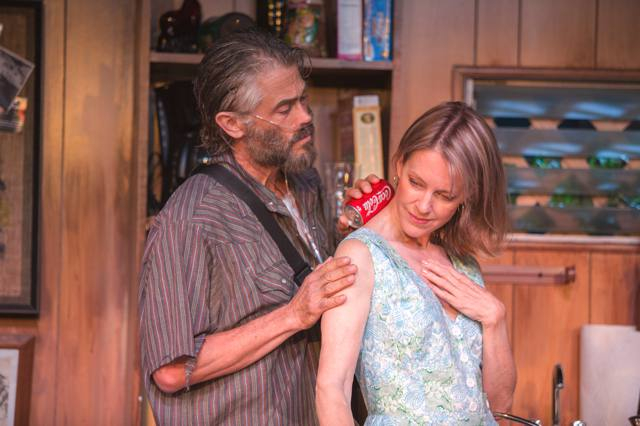 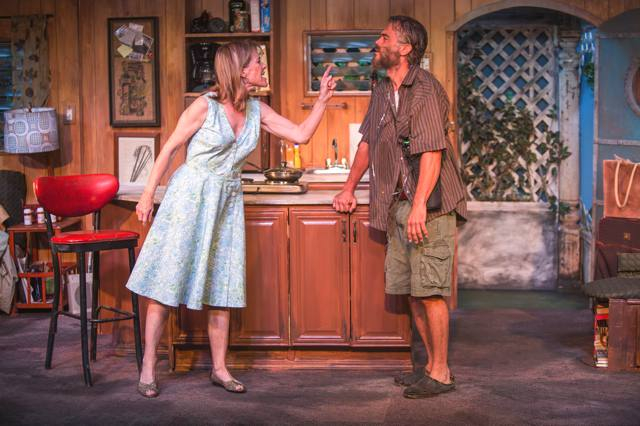 The bumpy road of love, marriage, and everything else in between, is often filled with potholes we call life passages. There are precious few rose gardens out there, promised or not, and some aren’t even worth taking care of. But Hope springs eternal.

In keeping with Celona’s promise to bring plays that address the 2016/17 season theme of “Love. Marriage, and Life Changing Events”, “Annapurna” is a bittersweet story of former married partners meeting after twenty years.

Emma (Anna Nicholas) tracks down her former alcoholic, poet/writer husband Ulysses (Eric Charles Jorgenson), to a trailer park in the middle of rural mountain high Colorado for a final reckoning. There are questions, deep hurts, and unresolved issues that force Emma to confront Ulysses after all these years.

The play begins with the disheveled, mountain man-like bearded Ulysses getting ready to prepare breakfast in his man-cave like digs, when Emma, his long divorced ex walks in the front door of his small, grungy trailer with two suitcases. He is not happy to see her despite a twenty-year absence. And she’s wondering if she made the right decision to confront him now that she sees him and his condition. For starters, he’s dying of emphysema and has an oxygen tube in his nose and is in a weakened, listless condition. But, he hasn’t lost his ability to yell and shout at her like in the old days.

Emma doesn’t push back against Ulysses’ boorish and bullying behavior. She appears calm and under control, going so far as to say this place needs a good scrub, and then begins to clean up. Then she opens up and tells Ulysses that she has permanently left her home and their twenty year-old son Sam (who is never seen only referred to) in order to alert Ulysses that Sam is on his way here to see his father after discovering a cache of letters that Ulysses had been sending to him via Emma’s mother over the last 10 years.

The ‘backstory’ is a bit fuzzy and melodramatic as to what really happened to Sam when Ulysses, in one of his alcoholic blackouts may have caused the deafness in one of Sam’s ears. This is one of the reasons why Emma wants to confront her ex. Does he remember striking his five year-old son? What happened? Ulysses says he has no recollection of anything that far back. He honestly can’t remember.

The narrative of White’s play is not its strongest asset. It’s the performances of the actors that win the day. There is good onstage chemistry between Jorgenson and Nicholas, and both are always in the moment. I won’t go so far as saying that some in the audience will find relevancy in the play’s subject matter, but parents in the audience might smile a bit as to the tug of war that goes on in all marriages, and especially where children are concerned when one parent is absent from the home.

There is light banter between Ulysses and Emma once the thaw begins. Perhaps, some vocal modulation between Jorgenson and Nicholas might better blunt the effect of yelling at each other all the time which becomes somewhat off-putting. At times, less is better.