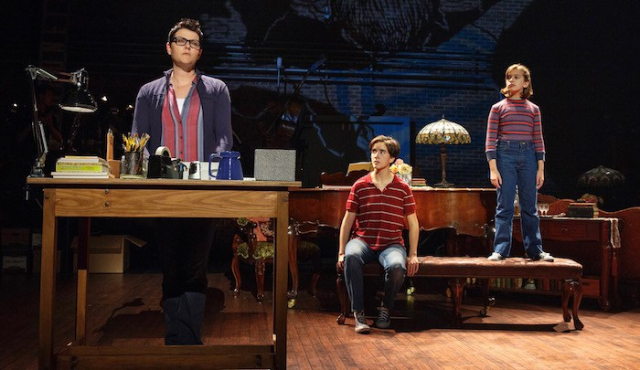 Fun Home, the prize-winning show (five 2015 Tonys including best musical), opened at the Oriental Theatre last week for a very short run. The play, based on Alison Bechdel’s best-selling graphic novel, is a story of growing up trying to figure out yourself and seeing your parents through new eyes as you mature.

Broadway in Chicago’s touring production, directed by Sam Gold, features Alison at three stages. Alison the adult (a lesbian cartoonist, as she describes herself) is played by Kate Shindle; college-student and medium Alison by Abby Corrigan; and small Alison by Alessandra Baldacchino. Alison’s father, Bruce, an artist, owner of the family funeral home (thus the title) and a closeted gay man, is a complex character sympathetically played by Robert Petkoff. Her mother, Helen (Susan Moniz), has long suffered with the knowledge of her husband’s disappearances to be with men.

Adult Alison, the storyteller, is an observer in all scenes as she tells her family story. She carries her sketch pad and frequently captions a scene.

Small Alison has two adorable brothers: Christian and John (Pierson Salvador and Lennon Nate Hammond. Their charming song-and-dance number in and around a coffin is a predictable show-stopper.

Alison’s family story is a memory play, as she sorts out her troubled relationship with her controlling father and comes to terms with her sexuality. As a college student, she makes sense out of bits of her past (hating to wear dresses, preferring sneakers to patent-leather flats). She falls in love with the confident Joan (Karen Eilbacher), sings “Changing My Major,” and comes out to her parents by writing them a letter.

The lovely reality about Fun Home is that it normalizes gay and lesbian family relationships as part of mainstream society. Gay and lesbian characters are real people with whom the audience can identify, not campy costumed misfits as they were often portrayed.

Its backstory further illuminates the dramatic changes in society’s attitudes toward gays and lesbians. Alison the lesbian cartoonist can be forthright about her relationships and her sexuality. Her father, from an earlier generation, comes to a tragic end because he felt he had no other recourse.

Fun Home is staged as a chamber musical with a small orchestra (guitars, bass, strings, reeds, keys and percussion) placed rear left on stage, directed by keyboardist Micah Young. Music by Jeanine Tesori with book and lyrics by Lisa Kron is low-key and tells Alison’s story effectively (although at times we had trouble catching the lyrics). Sound design is by Kai Harada and orchestration by John Clancy.

The scenic design by David Zinn spreads scenes of home, funeral home and campus across the wide stage with Ben Stanton’s lighting for emphasis. I’m surprised that drawings from the Bechdel book were not projected to enhance the story. This would have helped in this large theater as well as in smaller ones where Fun Home is playing on tour.

And why is the Chicago run so short? Fun Home may not be a traditional musical, but it surely would have a large audience in the Chicago area. If tickets are scarce here, check the national tour schedule to see it in other cities.

Fun Home runs 100 minutes without intermission. Performances are Tuesday-Sunday through November 13 at the Oriental Theatre, 24 W. Randolph. Tickets are $25 to $113 and can be purchased by calling 800-775-2000 or at Ticketmaster online or retail locations.