British Public Art Is For Sale 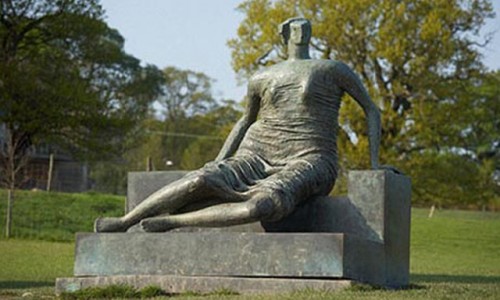 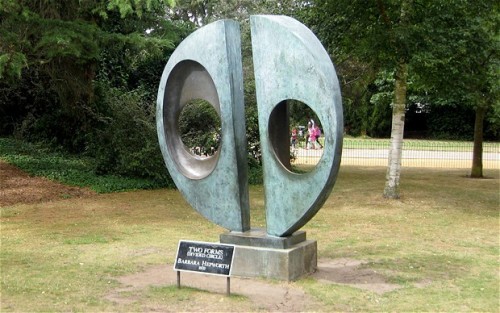 An Iconic Barbara Hepworth Sculpture that was stolen for its Bronze (worth about $1600). The sculpture was insured at a value of $500,000. 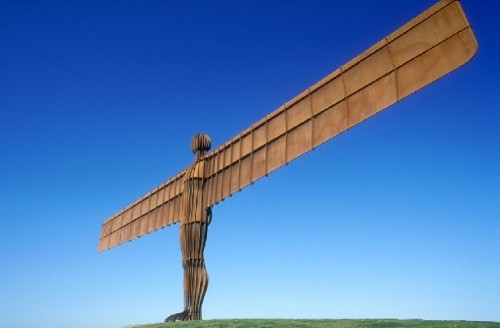 The Angel of the North by Antony Gormley , located in Gateshead, Tyne and Wear, England, Fabricated in Steel, 66’ tall x 1777’ wide 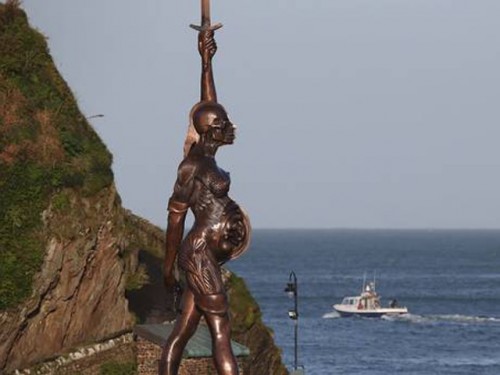 Verity By Damien AT Ilfracombe Bay, Devon. The controversial 66ft sculpture of a naked woman was erected in 2012. Cast in bronze, she holds a sword aloft and stands looking out to sea, apparently in a "modern allegory of truth and justice". But, half her womb is also hanging out. 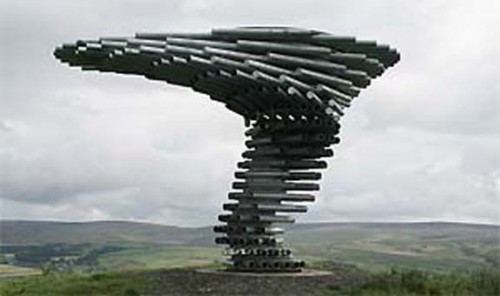 Set high above Burnley on the Pennine moors, Singing Ringing Tree By Mike Tonkin and Anna Liu in 2006. Not all the pipes create sound as some are just there to create the shape. The pipes that â€™singâ€™ create an unearthly choral sound, which is only audible at relatively close range on a windy day. 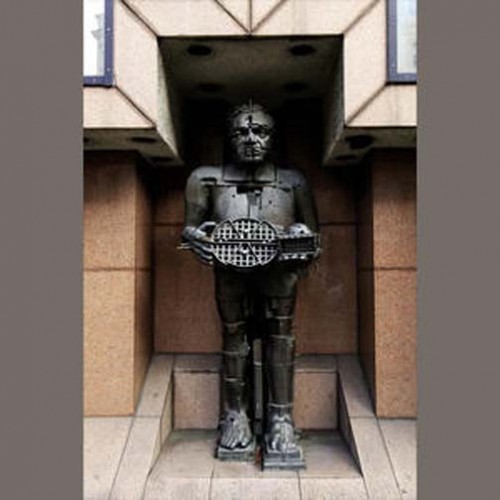 Bronze statue by Sir Eduardo Paolozzi (1924-2005), On Exhibit for 25 years in Camden in Central London is being put up for Auction. 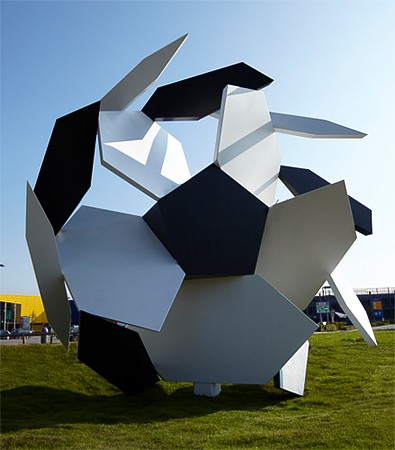 Set in the shadow of Wembly Stadium at the IKEA Store, this four meters high landmark sculpture , Angled Ball By James Hopkins, celebrates the community of Brent, and nearby Wembley Stadium, as the home of UK football (soccer). Funding for the artwork came from IKEA.

In Great Britain, it appears that the Philistines are not just at the gates but are living among the people and actually leading the communities. Recently, a local mayor of Tower Hamlets recommended that a large Henry Moore sculpture that had been donated by the sculptor be sold to assist with deficits of this rather poor community.

Now communities throughout the United Kingdom are thinking of selling and have actually sold their public art and artistic legacy. This is said to be due to the economic downturn. But it also can be said for the lack of significance applied to the visual arts.

Sound familiar? A couple of years ago, there was a major firestorm over Brandeis University's board of trustees' decision to sell off its art to raise money for the college's general fund.

Though Brandeis appeared to back down, apparently this notion of art as expendable resource is alive and well throughout the UK.

The mayor of the borough, Lutfur Rahman, decided to overrule the recommendation of his other councilors. According to Rahman, Moore’s Draped Seated Woman, nicknamed Old Flo, with an estimated value over $35 million, should be sold. Other officials felt that Rahman was going against the will of the community’s residents.

How very quickly money goes away by being spent, but the art can live for generations. Public art was not paid for from the general fund, but paid for from the National Lottery or donated by private individuals or corporations. But to many of those living in high rise housing blocks (projects), public art is personally inconsequential. This is not about enlightened self-interest. Public art and art in general add to the quality of life, the built environment and our sense of humanity.

Danny Boyle, a Tower Hamlets resident and the director of the opening ceremonies for the 2012 Olympics, strongly condemned the decision by the mayor.

"The value of art is diminished by being monetarised," Boyle said. "The Moore sculpure defies all prejudice in people's minds about one of London's poorest boroughs. That alone makes it priceless to every resident."

Mayor Rahman countered that the money raised would ease the £100m (about $165 million) budget cuts that Tower Hamlets, the home to some of Britain's poorest citizens, will face over the next three years. Temporary funding for daycare centers for both young and old, trash removal, and other services are badly needed since the draconian austerity cuts of the Conservative Government. Temporary balanced budgets trump permanent public art. Artistic heritage be damned.

Already, last year, Bolton, a community outside of Manchester, sold off some of its art. These included seven works of art; two etchings by Picasso, and a painting by John Everett Millais. The Gloucester City Council approved plans to sell fourteen works of art valued at nearly $650,000. Also, Newcastle City Council put over $300,000 of public funded artwork for sale on eBay. Really, eBay? And Leicestershire County Council has made $254,000 from selling some of its art collection.

Even in Central London, there is an effort to prevent the sale of a giant bronze statue by Sir Eduardo Paolozzi that has been on public display for 25 years. The sculpture is privately owned but was designed to stand in front of an office at 34-36 High Holborn. To remove it would be a major act of denigration to Camden's environment and to the UK's artistic heritage.

Visual art, especially public art, only seems to be representing a monetary value. It is true tastes in art change. More classical 17th and 18th Century figurative forms were superceded in the 20th Centry by more abstracted ones. Looking at Henry Moore's Old Flo, the piece may not be literally everyone's cup of tea in Tower Hamlets. But, symbolically, it stands for a great deal.

Henry Moore gave this sculpture to Tower Hamlets. Why did he do this? Because Moore was a socialist who believed in the 19th Century aesthetic philosophy of John Ruskin and William Morris. To him, art and beauty mattered just as much for poor people as for the rich.

Rather than being an artist whose works were only exhibited in the world's great galleries and museums, Moore believed that sculpture was a public art that enhanced the quality of people’s lives. To him, we all needed to be surrounded by beautiful objects.

This notion must be better articulated. In a most direct way, public art education must be part of the civic discourse. Proponents must speak to the overwhelmingly positive aspects of public art to counterbalance its various opponents and even the know-nothings in a thoughtful way.

Public art talking points must incorporate a series of understandable notions. These include the idea that public art can heighten awareness, be it provocative or visually soothing. Through form, scale and color, we feel a connection to the natural as well as the built environment. There is also a transformative aspect to public art that changes our civic and/or personal environments.

It can define a sense of place and underscore a pride of place. It can be a unifying energy that invites interaction and reaction. Without a doubt, it can make you feel and can delight. Recent studies have shown that public art adds to the healing environment as well.
Times may be economically tough, but our aesthetic tradition, our civic cultural heritage must not be destroyed or exchanged for limited , temporary financial gain. This lesson must be taught and taught well. This is a lesson that must be shared now.

For public art in Great Britain, this will not be a moment too soon.