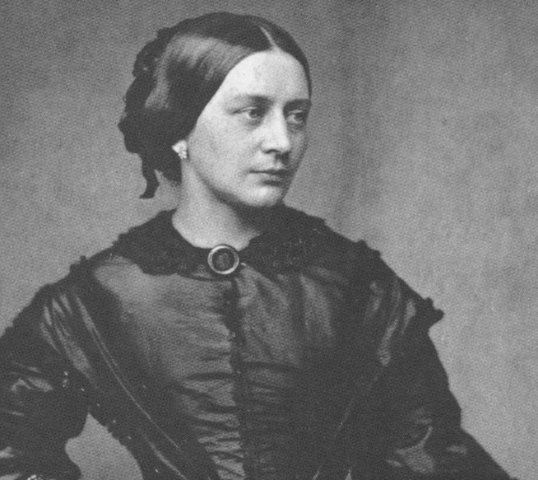 Victoria Bond's Clara was introduced to American audiences at the Leonard Nimoy Theatre at Symphony Space. German Forum presented the concert version.  Four rich scenes from the opera were bridged by narration from the composer, who also conducted.

A Clara Schumann stand-in, Babette Hierholzer, performed at the piano, in pieces Clara, a child prodigy, performed in concert. She also was a member of the trio, which included Yana Goodman on violin, and Thilo Thomas Kriger on cello.  They played the orchestration with evocative suggestion.  Bond's music bracketed the piece and was interwoven with phrases and passages colored like the music of the three composers who are characters in the opera.  Clara was married to Robert Schumann.  Johannes Brahms, the gifted tenor Heejae Kim was a member of their household for years.

Clara, sung by Christina Reber,  quietly notes that Brahms is very handsome.  Underneath the beard of his later years, he clearly was.  The extent of the pair's relationship is still speculated on.  The Schumann's eighth child, Felix, was born after Robert was institutionalized in an insane asylum.  Brahms never married and had no acknowledged children. While Clara concertized, he often was nursemaid to the children.

Clara's father, Frederich Wieck, was a father from hell.  Her teacher and promoter, he ignored his other children to focus on his 'genius.'  Clara recognized her dependence on him.  When he forbade her marriage to Schumann, she bravely chose love over career.  Frederich, sung with a fierce cruelty by Robert Osborne, cut the Schumanns off.  Yet, ever a practical man, when Robert's star rose, he made up with the couple.  One is reminded of Rimsky-Korsakoff's Mozart and Salieri, but the outcome is less dire.  Operas about composers have the advantage of deep musical reference, which Bond takes into account.

Jonathan Estabrooks as Schumann is given a role as beautiful as his composed melodies, and sings his heart out as he courts Clara and stiffens her spine to withstand her father.

The trio's music suggested the feminine in the chimes of the piano's upper register.  Rushing scales and arpeggios give us the sense of the rigorous demands of practicing for a concert career.  The strings offer continuity in their repetitive phrases and passages.

The opera gives us a peek into the inner lives of three important musical artists.  The conflicted feelings that arise in women who try to manage career and family are all too clear.  Yet this is a lovely work, enticing and engaging.