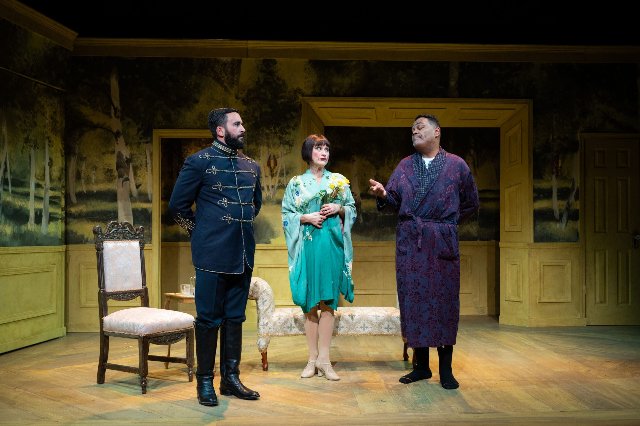 Stephen Sondheim and Andrew Lloyd Webber are undoubtedly the most lauded living composers for the musical theater.  Although Lloyd Webber has garnered more commercial success, Sondheim is probably preferred by most cognoscenti for his originality; sophisticated musicality; concise and insightful lyrics; and adventurous themes.  And while Lloyd Webber seems driven more by popularity, Sondheim almost disdains it.  But the Sondheim canon is so rich that 42nd Street Moon has announced that it plans to produce every Sondheim musical, from the most successful to the abject failures.

Struggling with jet lag from 24 hours of flying, my wife/editor and I attended the Broadway production of “A Little Night Music” with the noteworthy original cast.  In my drowsy condition, it served as a fine soporific.  Not having revisited it for nearly half a century, I remained convinced of its mediocrity.  Wrong!  The 42nd Street Moon production disabuses me of that notion and reveals what a gem it is.  The company offers an entertaining and likeable rendition that demonstrates the show’s many assets but would benefit from some refinements.

Sondheim chose his source material well.  “A Little Night Music” is a truly charming, lighthearted delight, with the proviso that strict moralists may find its gentle and mischievous treatment of illicit affairs not to their liking.  Although Sondheim’s music and themes often have sharp edges, “A Little Night Music,” which is based on Ingmar Bergman’s film “Smiles of a Summer Night,” is written predominately in waltz time and is highly melodic.  And with the exception of the pivotal character, Desiree, the singing parts call for highly trained voices.  These characteristics of the musical are in evidence from the opening number which includes operatic vocalizing and waltzing.

In this farcical Swedish comedy of relationships from the turn of the century, Desiree is a faded but esteemed stage actress reduced to performing in lesser markets.  Alison Ewing, who carries the magnetic air of a diva with great confidence, exquisitely portrays Desiree.  Ewing captures the flair, the self-indulgence, and condescension, yet concealed angst, of the center of attention with a memorable performance.

A lover from Desiree’s past, lawyer Frederik, is recently married to a teenage bride, Anne, but the marriage has not been consummated.  His confused son, Henrik, who is the same age as Anne, is studying at a theological seminary, but is on a home holiday.  Desiree performs nearby, and Frederik furtively visits.  She receives him despite otherwise carrying on an affair with the married Dragoon Count Carl-Magnus.  In short order, after a weekend in the country with humorous interludes, some alignments shift, others remain.

The other star turn in the production is Cindy Goldfield as Desiree’s mother, Madame Armfeldt.  She is commanding as the imperious, authoritative grande dame, but under the veneer, she reveals wistfulness and love.  Although she doesn’t take part in the dalliances and is often off to the side of the stage in her wheelchair, she provides the philosophical core to the story and much of its heart.

It’s hard to decide which of the composer’s elements is more compelling in “A Little Night Music,” the music or the lyrics.  The melancholy “Send in the Clowns” is certainly one of the most sublime melodies in all of music, and it is beautifully delivered by Alison Ewing in an uncommonly low register.

But the whole score is not only tuneful, but jaunty and highly complex, with wonderful numbers of hope and regret like “A Weekend in the Country,” “Perpetual Anticipation,” and “It Would Have Been Wonderful.”  Ensembles abound, including a double quintet, as well as rich counterpoint and rondo.  And straying from the central musical motif, the composer integrates a doleful folk melody in the maid’s thoughtful commentary on love and social class, “The Miller’s Son.” The lyrics amaze with their intelligence and incorporation of copious rapid patter, alliteration, multiple rhyming, and frequent use of rhythmic tripling patterns.

Vocal demands make casting of this musical difficult.  Some singers lack appropriate power and/or vocal quality desired.  Minimally, the performers portraying teenagers would benefit from amplification to ensure that their speaking and singing is sufficiently audible for the audience to follow.  Yet, except for some early murkiness of sound, the singers handled the quick crispness of the lyrics and the convoluted ensembles very well, many of which will put a smile on your face.

“A Little Night Music” with music and lyrics by Stephen Sondheim, book by Hugh Wheeler, and suggested by Ingmar Bergman’s film “Smiles of a Summer Night” is produced by 42nd Street Moon and plays at Gateway Theatre, 215 Jackson St., San Francisco, CA through November 21, 2021.