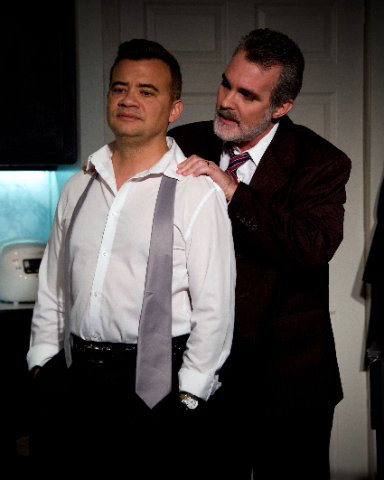 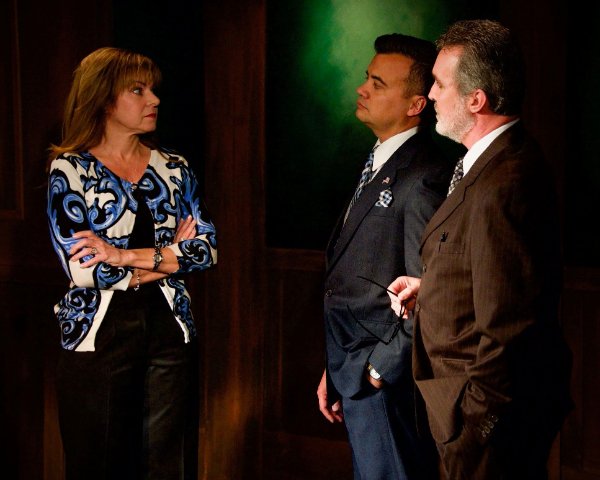 “They take an aged steak, slice off the crust, and grind it,” political “fixer” Nathan Berkshire says.

Surely, the rough world of politics can also grind the lives of candidates and officeholders into shreds – especially those with a less-than-stellar past.

Such is the case for congressional candidate Julius Weishan Lee in Warrior Class. The play recently opened in a riveting production by the professional company Boca Stage (formerly Primal Forces) in Boca Raton. Warrior Class takes place in modern times in New York and Maryland.

The performers invest the action with such an intensity and urgency that looking away, even for an instant, seems out of the question. Indeed, the suspense is heavy, like a mystery novel that you just cannot put down.

Under Genie Croft’s deft direction, the actors are intense, yet never seem like they are forcing emotions. Frankly, they disappear into their characters. And the pacing is just right.

In Warrior Class, Lee is a New York assemblyman. He is the son of Chinese immigrants and a decorated war veteran preparing to run for Congress. Then Holly Eames appears. She is his ex-girlfriend from college. Allegedly, Lee stalked her in strange ways while the two were college students. Eames has re-entered Lee’s life, and will not go away quietly. First, she demands that the assemblyman secure a governmental job for her husband, an unseen character. If not, she will talk to the “New York Times” about what happened decades ago at their college. Certainly, that would set Lee’s political career back, if not crush it.

If Warrior Class seems like a recognizable play, it is because you have heard in the media about people such as Lee and Eames, and will continue to.

To his credit, Lin is not interested in bogging us down with details to determine Lee’s guilt or innocence. Instead, in his taut, focused, and intense play, through smart and snappy dialogue, the playwright offers a rare glimpse into politics behind-the-scenes. It is the kind of world in which winning is more important than improving society, the “players” make deals, blackmail never goes out of style, and meetings take place secretly. The players include folks such as Berkshire. He is a “fixer,” a person who intervenes to enable someone to circumvent the law or obtain a political favor. You might have seen such a person on the Netflix series, House of Cards, for which Lin is one of the writers. You may even know such a person.

Credit the playwright with making the characters multi-dimensional. For instance, Eames is not a vindictive, nasty woman with no redeeming qualities. Nor is she a completely innocent victim. Meanwhile, Berkshire can be affable, but he can also be a jerk. As for the assemblyman, he seems earnest and easy to like. But then you hear about what he allegedly did in the past, and you wonder whether you want to be around him.

As Berkshire, Wayne LeGette endows the character with a charm and affability that can put people at ease. But LeGette’s Berkshire, at times peering over reading glasses, can also an aggressive, cunning, hot-tempered individual bordering on a jerk. LeGette sometimes leans into the person with whom he is speaking. This helps convey the character’s aggressive personality.  LeGette, a two-time Carbonell award winner, a seven-time nominee, and a Broadway World LA nominee, plays Berkshire with impressive spontaneity. Part of what helps LeGette achieve this is that he seamlessly pairs speech with action. For instance, with ease, he removes and puts his glasses back on multiple times as he thoughtfully speaks the character’s words.

Meanwhile, Paul Wong invests Lee with a more laid-back aura, which creates contrast. Wong makes the assemblyman a seemingly sincere man who also appears naïve and insecure. You also sense that his ex-girlfriend’s re-entry into his life has overwhelmed him. Watching and listening to Lee, you have a hard time believing that he did what Eames has accused him of doing. But then, as Lee says, “It’s been a long time since we’ve known each other. You’ve changed. I’ve changed.”

Jacqueline Laggy lends Eames a credibly assertive air. And you sense her anger and hurt at what she allegedly suffered through in college are still raw feelings. But at the appropriate time, Laggy exudes charm and conviviality toward her former boyfriend. This suggests that she still harbors feelings for him. Wong’s Lee also displays pleasantries toward his ex-girlfriend during the appropriate time.

Dustin Hamilton’s set allows scenes to easily shift from one place to another. On one side of the stage sits a restaurant. It is enclosed, reinforcing the idea that in politics, some things happen in private. Next to the restaurant sits the assemblyman’s apartment. Details, such as a cross on the wall, are appropriate, given Lee’s devoutness. The apartment, which includes dark furniture and art hung on the wall, carries an aura of elegance, suggesting the assemblyman is well off.

Jayson Tomasheski and Ardean Landhuis designed the lighting. It is often dimmed. This can reinforce the idea that in politics, some meetings take place in secret.

Warrior Class can raise eyebrows. For instance, it is hard to believe that the assemblyman would allow even his fixer to enter his home when he’s not there. But in the final analysis, the play is an incisive, taut, and absorbing drama. Act one’s conclusion makes us anticipate the second act. And, fittingly, at the end, we hear the sound of popcorn kernels exploding from the assemblyman’s popcorn maker. Undoubtedly, this represents Lee’s congressional hopes going up in flames. We also hear jarring notes from his piano, and see him appear unsteady. It is as though an earthquake is upending his existence.