The Hanging Gardens by Frank McGuiness

The Hanging Gardens had its world premiere at the Abbey Theatre. 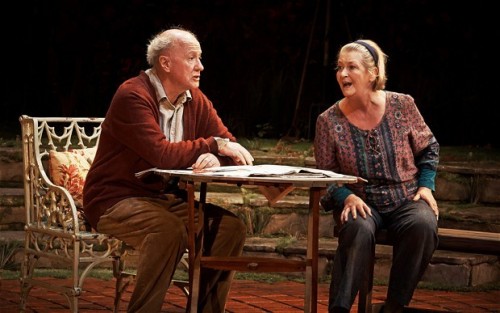 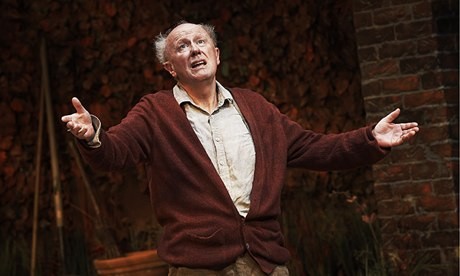 A commanding performance by Niall Buggy as Sam an author declining into dementia.

Facade of the venerable Abbey Theatre. 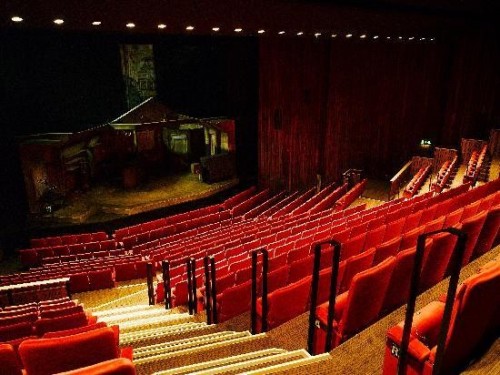 Interior of the intimate theatre.

On our first visit to the venerable Abbey Theatre we sat contemplating the brick terraced, curving garden (evocatively designed by Denis Clohessy with nuanced lighting by Joan O'Clery) conveying the title of the Frank McGuiness play, The Hanging Gardens, his first new production in 14 years for the company.

An elderly man in pajamas, Sam Grant played with stunning conviction by the renowned Niall Buggy, enters and stands at center stage. He is suddenly drenched by a downpour.

His arms outstretched roaring against and celebrating the vehement inclemency he evokes a deranged, senile King Lear cast out into the wilderness through his own folly. Lear’s fatal flaw was miscalculation of the greed and ambition of his children.

There is indeed much of Lear in the tightly woven, dysfunctional family crisis surrounding the encroaching dementia of a once notable Irish author. His creative well has long ago run dry and with it the now parched flow of former income.

His wife (Jane played with chilly restraint by Barbara Brennan) who has enjoyed some success as an author of popular books on gardening seems more adept at raising flowers than children.

There are three siblings.

Charlie (Declan Conlon) has stayed at home and minded their aging parents. Is this out of duty and responsibility? Or, is it through weakness and fear of venturing out into the world? For this alleged sacrifice, as is so often the case, he feels entitled to inherit  the impressive family home in Buncrana, County Donegal.

Of the three children Rachel (Cathy Belton) appears to be the most independent and successful. She has pursued a career in law. Still single, with her biological clock ticking down, she is about to become a mother by a man who remains anonymous.

Maurice (Marty Rea) is an academic and intellectual who struggles with self image and identity.

Both in the character, as written by McGuiness and as magnificently performed by Buggy, the ego and impending decline of the great man, Sam, dominates this production. His tottering grasp of a towering but declining persona forms a nucleus and foil for the actions and conundrums that surround him.
While a writer and renowned intellectual, like Lear, the drama explores the all consuming arrogance of a great man and what happens when power and authority disintegrate.

There are complex synergies and alliances among the characters with seemingly only DNA to bond them.

The family has not gathered in some time. Rachel and Maurice are glad to see each other. He is concerned but supportive of her decision to become a single mom. She in turn is lovingly protective of his fragile, closeted identity. He arrives at home having recently been rejected by a lover.

Charlie remains sullen and aloof. While thinking of himself as a victim and martyr he has given more than he received from self absorbed parents. He is fixated on the notion that much is owed to him. This is the familiar argument of the weakest and least evolved member of a family. His failure, and lack of social and economic development, is used as blackmail for his parents and leverage against the success and independence of siblings.

The three siblings each want something from their parents but there is little to be had.

In the midst of an escalating crisis Barbara is intently involved with gardening. She can make things grow but is incapable of nurturing her children. This is particularly cruel and chilling when Rachel conveys news of her pregnancy. It is met with indifference and contempt. Rachel proclaims that what her mother provided was the motive to move away creating her own life and career.

In a riveting evening of theatre with superb performances we explore the motivations of individual characters as well as their struggle to survive as a family.

For Sam the primary concern is his literary legacy, ego and identity. He is no longer capable of pursuing his work. Barbara is free from that dilemma as her successful publications were less about ego than a source of income. While Sam ridicules her populist career it becomes apparent that she paid most of the bills. While now on fixed income they aspire to hold onto their home as a signifier of their worldly success.

The problems and potential solutions of The Hanging Gardens present universal themes that every family can identify with. What to do about Dad? Should the property be sold and assets used for assisted living and managed care? If Charlie is the designated care provider does he deserve proportionate compensation? What does that leave for Rachel, soon to be a mother, and the fragile, struggling Maurice?

What is so absorbing about this stunning and poignant play is the depth to which one can identify with its broad themes and characters.

I can see so much of my own parents in Sam and Barbara. My father was indeed a great man, a surgeon, more absorbed by his career than raising a family. Retirement years, and its consequent loss of life and death powers, did not sit well with him. His gradual demise slowly tipped the balance of our life long struggles.

It brought a lump to my throat when Sam can no longer put on his socks and shoes. He can understand socks but shoes make no sense to him. The actors brilliantly defined the fine line between sympathy and empathy. There is little redeeming about Sam and Barbara but we can feel for their crisis and its universal humanity.

It is the ultimate force that unites the family with a commitment to play out the complex and emotional endgame.

To be fair, this new play by the renowned McGuinness drew mixed reviews from Dublin’s critics. Perhaps, as an outsider I saw it differently. Lacking history with the playwright, company, and cast I came to it with no preconceptions.

This is a play that would enjoy great success in American regional theatres. Its well drawn, complex themes have broad appeal to audiences. Arguably, I was not alone in coming away from a powerful and poignant evening with pain in my heart. It is the kind of play that lingers with you long after the final curtain.

Was that a play or my family that I saw on stage at the Abbey Theatre? This heart wrenching play makes us look long and hard into ourselves.