The Little Flower of East Orange in Chicago 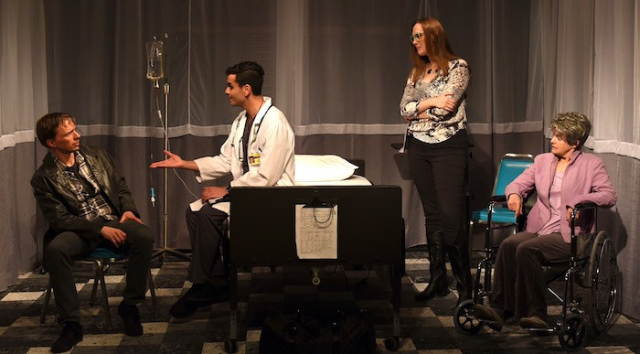 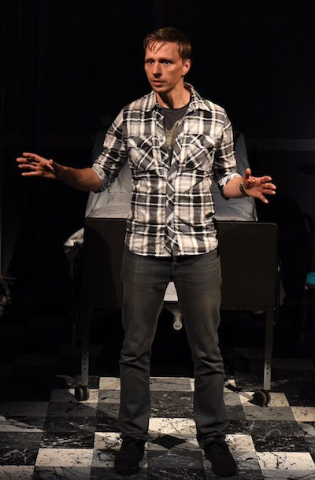 The Little Flower of East Orange at Eclipse Theatre is a play of family turmoil that features colorful side characters as well as the tortured family members—mother, son and daughter. Director Steve Scott stages the story in a hospital emergency room; the characters and the dialogue sizzle and lift the drama out of its bleak environment.

Playwright Stephen Adly Guirgis wraps the story of Danny the writer around the sibling-and-parent distress of The Little Flower. Danny’s speeches about grace at the end of act one and at the play’s conclusion tell us what Guirgis hopes we gain from two hours with his angry and perplexed family.

“And what is grace? Grace to me is that thing that I constantly spit in the face of. If there’s a god, he loves me but I don’t seem to love him back enough. And thus my life. Grace offered acceptance and good counsel. And I spit in the face of it. Why? Cuz somehow I felt undeserving and angry and completely fuckin’ powerless.”

Danny (John Henry Roberts), straight out of drug rehab in Arizona, plays the narrator role but he also is his mother’s son. Therese Marie (Jeanne Affelder) cherishes him even while she condemns his bad habits. Therese Marie aka Terry is beautifully played by Jeanne Affelder, who alternately loves and tortures her children.

As the play opens, Danny and his sister Justina (Jess Maynard) think their mother has disappeared. At that time, an older woman is being brought in to a New York City emergency room. She doesn’t seem to know her name but she remembers the names of old movie stars and historical figures who pass through her dream life.

Terry’s hospital caretakers are two of the more delightful cast members—people you would want taking care of your own mother if she’s hospitalized. Ebony Joy is the straight-talking, caring nurse Magnolia and Donovan Diaz is the smart, funny and equally caring orderly, Espinosa, the guy who knows how to take care of everything. Dr. Shankar (Omer Abbas Salem) is the physician on duty who tries to help Terry and explain reality to her son and daughter.

Terry’s story, which doesn’t become clear until late in act two, is about a child born to hearing-impaired parents. Early in her life, she suffers a serious spinal injury, causing her great pain for the rest of her life. Her father (Michael Stark), with whom she has a stormy relationship, appears to her in ghostly form. Terry has other dreams and fantasies, some of which seem very real to her.

In a long scene late in the play between Danny and Therese, she tells the story (familiar to her son) of her family, her injuries and her fantasies. This scene goes on a bit too long, to my mind. It also conveys information about Therese’s past and her relationship with Danny that could have been conveyed earlier in the play.

The mother-son relationship in Little Flower reminded me of Tennessee Williams’ The Glass Menagerie, in which the play is structured around poet Tom’s memories of his wounded, prideful mother.

Little Flower isn’t just another dysfunctional family story. These family members scream their most hateful memories at each other. Both siblings scream at each other and at their mother. The reasons for these feelings of bitterness are not always clear. Another wrenching scene occurs early in the play when Justina, visiting her mother’s hospital room, plays her violin while screaming at her, “I fuckin’ hate you…. Fuckin’ pathetic, helpless martyr. If you die, I won’t bury you!”

Guirgis opens the veins of family feelings in his plays, with his gritty, piercing dialogue. He writes scenes we usually don’t see in public, scenes that reveal long histories of family abuse that become painful memories. He does this in Between Riverside and Crazy and The Motherfucker with the Hat, both staged at Steppenwolf, and in the other two plays in Eclipse’s Guirgis season, Jesus Hopped the ‘A’ Train and Our Lady of 121st Street. Guirgis is a member of New York’s highly regarded LAByrinth Theater Company. Little Flower premiered at LAByrinth in 2008, directed by the late Philip Seymour Hoffman.

The Little Flower of East Orange, staged by Eclipse Theatre, continues at the Athenaeum Theatre, 2936 N. Southport, through December 18. Running time is 140 minutes, with one intermission. Tickets are $20-30 and can be purchased online or by calling 773-935-6875.